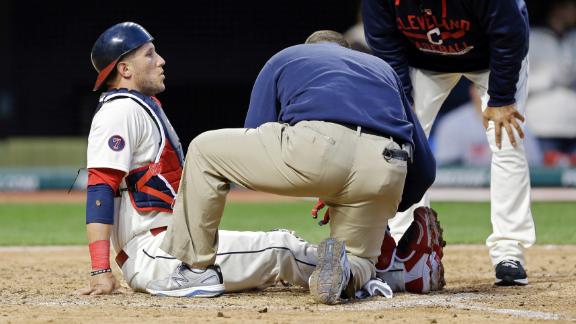 CLEVELAND --Yan Gomes is expected to miss six to eight weeks after an MRI confirmed that the Indians catcher has a sprained right knee.


Gomes was placed on the 15-day disabled list Sunday, one day after he injured his knee on a play at the plate in Cleveland's loss to the Detroit Tigers.


The Indians said an MRI performed at the Cleveland Clinic revealed Gomes suffered a "moderate'' sprain to his MCL. His leg was jolted violently by Detroit outfielder Rajai Davis, who slid hard on a force play and clipped the catcher's right leg. Gomes was extended at the time like a first baseman making a catch.


Before Sunday's game, Gomes hobbled onto the field on crutches to receive his Silver Slugger Award from last season.


The loss of Gomes is a tough one since he's the club's top right-handed power hitter and a solid defensive player. Last season, Gomes led all AL catchers in average (.278) and extra-base hits (49). He was second in RBIs (74) and homers (21) and handled one of baseball's youngest starting staffs.


"Anytime you lose him for any amount of time it's not good," Francona said after the Indians lost 8-5 to Detroit, which completed a three-game sweep. "In the really big picture, it could have been worse. This is about what we thought after talking to the trainers last night."


Not having Gomes in the lineup or behind the plate weakens the Indians.


"I think I used the word with Gomer a lot of times this spring where you like your catcher to be indispensable," Francona said. "I think that's a pretty big compliment to Gomer."


Marcum, 33, has not pitched in the majors since 2013, when he went 1-10 with the Mets. The two-time 13-game winner has worked as both a starter and reliever in parts of eight seasons with the Mets, Brewers and Blue Jays.


Roberto Perez started Sunday in place of Gomes, and the team will call up Brett Hayes from Triple-A Columbus on Tuesday. The Indians are off Monday.


Gomes' absence was felt in the first inning Sunday when Perez overthrew third base on a double steal, allowing the Tigers to score their first run. Perez went 0-for-3 with a sacrifice fly in the loss.


Francona is confident that Perez, who homered earlier this week in a win at Houston, can fill in capably while Gomes is out.


"We're so fortunate we have Roberto," Francona said. "I would say the biggest thing is that every single pitcher on the staff has not one single issue throwing with Roberto. He has a little bit less experience less than Gomes -- not a ton, but some. But they all love throwing to him. We told him this spring, 'Prepare like you're going to be an every-day guy, because you're always one injury away from being an every-day guy.'


"Unfortunately, that happened. The good side for us it that he can handle this."


Perez played in 29 games last season for the Indians, who brought up the 26-year-old in July. He batted .271 with one homer and four RBIs.