Yankees' Aaron Judge pulled vs. Braves due to calf issue, will be reevaluated Thursday 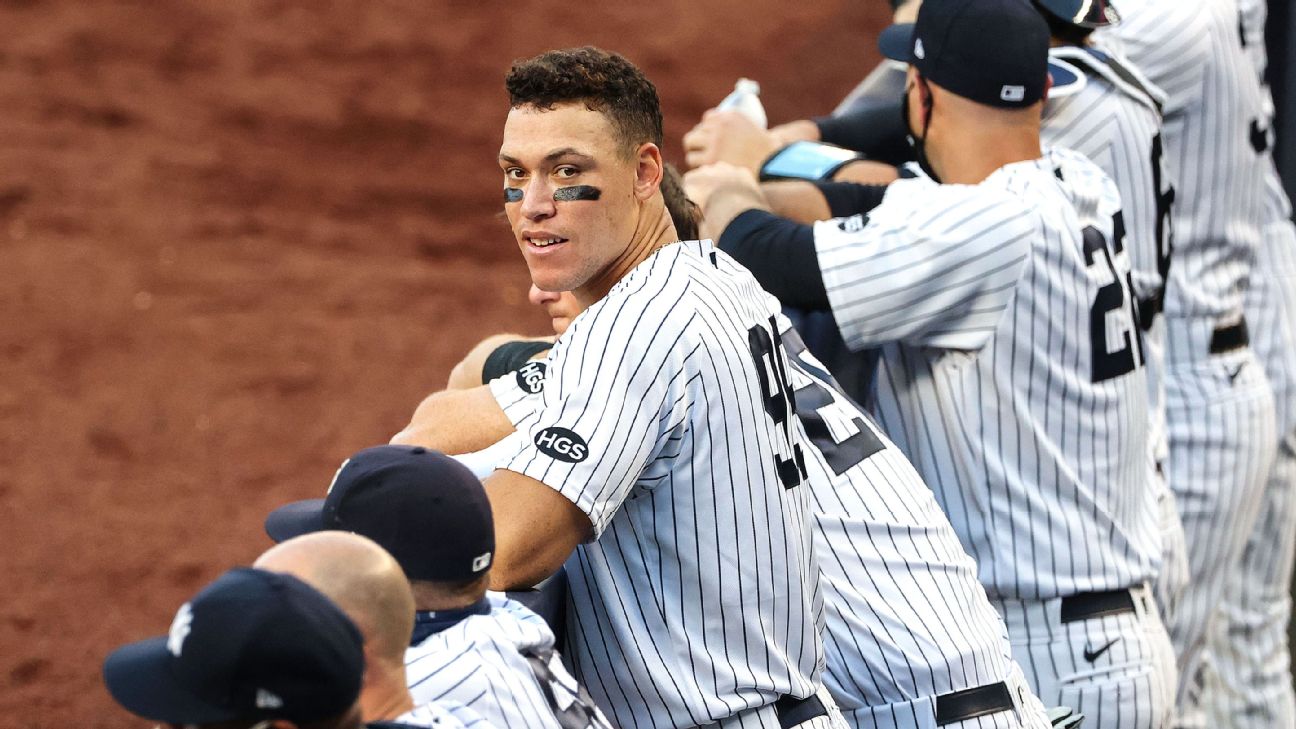 NEW YORK --Yankees outfielderAaron Judge, who was back in action for the first time since coming off the injured list due to a right calf strain, might be headed back to the IL.

The Yankees expected to activate Judge from the 10-day injured list on Tuesday, but their first game in Atlanta was rained out and rescheduled as part of Wednesday's doubleheader. The Braves won both games, 5-1 in Game 1 and 2-1 in the nightcap.


Judge, playing in his first game since Aug. 11, was the starting right fielder in Game 2 and grounded out in his first at-bat against starter Max Fried. Judge got a leadoff hit in the fourth inning but apparently reinjured his leg running to second base when Luke Voit hit into a 5-4-3 double play. Brett Gardner came in as a defensive sub for Judge in the sixth inning.

"He tightened up again in that calf area running to second base, so we'll see where he's at," manager Aaron Boone said. "Doesn't seem to be overly serious but enough that we needed to get him out of there. [It's] frustrating, no question. Obviously, he's very frustrated, but we'll see where we're at as we get through it tonight and where he's at feeling tomorrow."

Boone said that it's "possible" Judge could be headed for another IL stint, but added, "I think we'll have a better feel later tonight and into tomorrow exactly where he's at."

Judge was expected to come off the IL as soon as he was eligible this past Saturday, but the Yankees' scheduled three-game weekend series at Citi Field was postponed because two members of the Mets' organization tested positive for COVID-19.

The 2017 American League Rookie of the Year has suffered a series of injuries the past two years. In 2018, Judge suffered a chip fracture of the right wrist after being hit by a pitch, which limited him to 112 games. Last year, Judge was limited to 102 games mostly because of a strained left oblique.


Judge was significantly limited during spring training in February because of a stress fracture in his first right rib, and a subsequent punctured lung, attributed to a diving catch attempt last September. The right fielder did not participate in full workouts and did not play any games before MLB's shutdown mid-March.

The delayed opening of the 2020 season ended up being beneficial to the right fielder, allowing him extra time to heal; Judge would have missed a few weeks at the start of the season if there had not been a 3-month hiatus. Before going on the IL, Judge was off to sizzling start with nine home runs and 20 RBIs, batting .290 with a .758 slugging percentage and a 1.101 OPS in 17 games.

The Yankees have bemoaned the string of injuries they have had since the beginning of this shortened 2020 season. Three of their best players -- shortstop Gleyber Torres, outfielder Giancarlo Stanton (left hamstring strain) and infielder D.J. LeMahieu (left thumb sprain) -- are on the 10-day IL.

New York came into Wednesday's doubleheader having to play their remaining 35 games in a span of 33 days. Judge had been on the IL since Aug. 11 when an MRI showed what Boone had called a "Grade 1 or even lower" right calf strain.