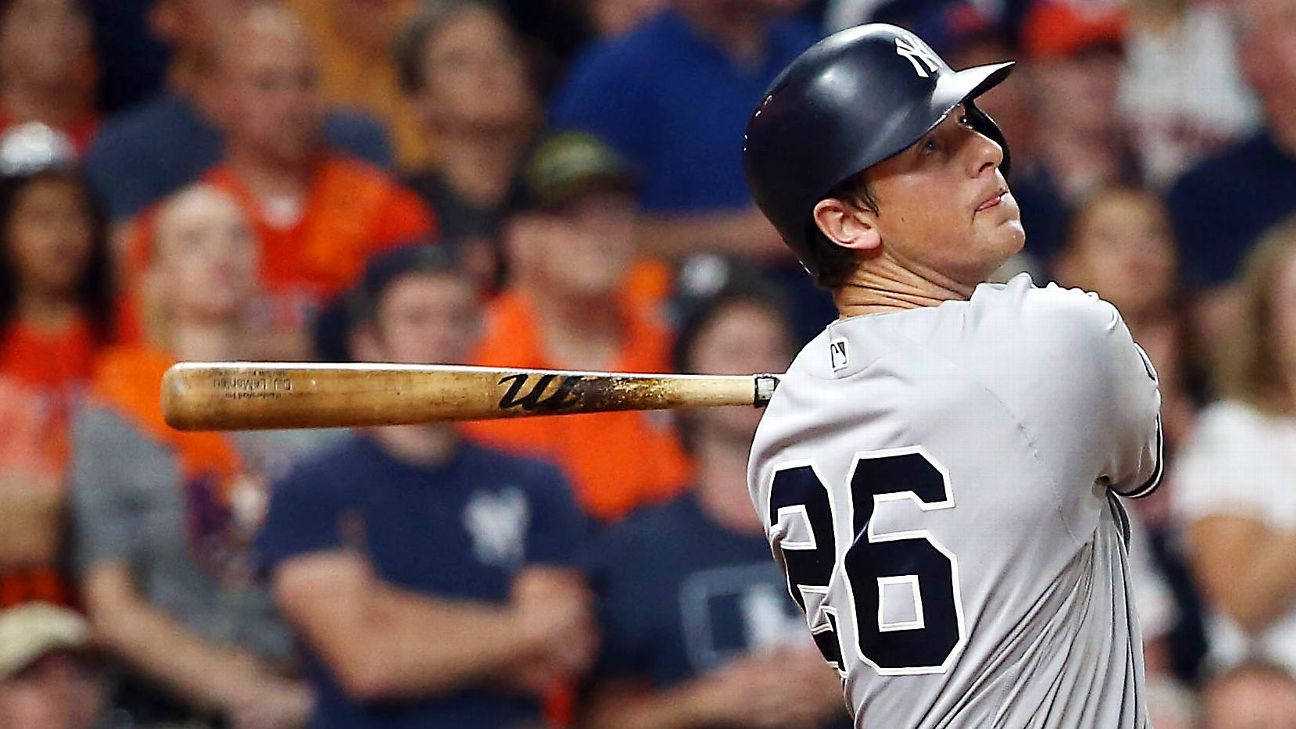 NEW YORK --Yankees All-Star second baseman DJ LeMahieu resumed his preseason workouts this week for the first time since what he called the "scary" experience of having tested positive for COVID-19.

"It was surprising. It was shocking. It's definitely a scary thing when you have something that there's no cure for," said LeMahieu, who was tested back home in Michigan. "I didn't really have any symptoms; very surprised I tested positive. I was lucky I wasn't in contact with hardly anyone when I got the news. I really didn't do a lot, just kind of hung out and tried to get those negative tests and get back here as soon as I could."


LeMahieu returned to New York two weeks after manager Aaron Boone announced that he was asymptomatic and self-isolating in his home in Michigan after having tested positive for the coronavirus prior to the beginning of the intake process.

"I had been in contact with someone who was positive, and I wanted to see my dad, but I didn't want to see him until I got tested; tested positive and got a call four or five days later and, obviously, really shocked," LeMahieu explained.

In order to be allowed to rejoin the team, LeMahieu had to be cleared by a joint committee selected by MLB and the MLBPA, as directed in the operations manual for the abbreviated championship season. The joint committee, which includes doctors and non-medical staff, clears any individual who tested positive or was exposed to another individual who tested positive, to return to work.

Normally, an individual must test negative on two consecutive PCR tests, taken at least 24 hours apart. However, in LeMahieu's case, he continued to test positive for a prolonged period.

An email sent by the union to all players detailing some of the health and safety protocols, of which ESPN obtained a copy, explained that some individuals will continue to test positive for prolonged periods of time even though they are no longer infected with the virus. According to medical experts, this can happen because the person has noninfectious virus particles that are taking a long time to clear. Any individual who is cleared to return to summer camp has to present absolutely no risk of contagion to others.

While the Yankees bused over to Citi Field on Saturday afternoon to play against the Mets in the first of three exhibition games scheduled in the next three days, LeMahieu stayed back at Yankee Stadium to practice with select members of the team and coaching staff. Boone said he hadn't gotten a report on LeMahieu's status when he addressed the media before Saturday's game, but he had said that the Yankees had mapped out the next four or five days to help LeMahieu get live at-bats.

Boone said that LeMahieu would focus on batting practice, defensive work and training in the weight room in the upcoming days, but that there is no specific timeline for his return to play. The Yankees are less than a week away from their scheduled season opener in Washington D.C.

"Everyone is excited to see 'The Machine' back in the building,'' said Boone upon welcoming back LeMahieu and envisioning his workout schedule. "The strength and conditioning staff will all make their evaluations in consultation with the player; put a plan of action in place over the next couple of days."

Hitting coach Marcus Thames affectionately called LeMahieu a "baseball rat," and said that the second baseman would have no issues letting the team know when he's back up to speed.


"We're going to take our time with him, make sure he's healthy; don't want to rush him. DJ worked really hard; even when the shutdown was in Tampa, he was there getting work in," Thames said. "But I'm going to take it slow with him. He'll let us know when he's ready. We're not going to push him. We're going to make sure he gets good enough at-bats, some live BPs and hope that he's ready."

If LeMahieu is not active by Opening Day, the Yankees have several options to start at second base, including versatile players like Tyler Wade and Thairo Estrada.

Nonetheless, LeMahieu said that it's possible that his season debut could come in the first week of games. The Yankees are scheduled to start the season with three games against the Washington Nationals, followed by three games against the Phillies at Citizens Bank Park before their home opener, also against Philadelphia, on July 29.

"I think it's a possibility; I don't know if it's realistic or not," said LeMahieu about playing on Opening Day, July 23, at Nationals Park. "I think that's going to be up to the trainers, and to Booney. But I think I'm gonna be pretty close. If it is not Opening Day, it will definitely be the first few games, but we'll see. We'll see how these few days go and for me, it's just going to be live at at-bats, the more I get, the more ready I can be."

Right-hander Luis Cessa, who was also revealed to have tested positive for COVID-19, told ESPN he believes he is fully recovered after having two negative tests, but still hasn't been cleared to work out with the rest of the team. Boone said he didn't have any updates on Cessa or Aroldis Chapman, who the team announced had tested positive for the novel coronavirus on July 11.
Report a correction or typo
Related topics:
sportsespnnewsmlbnew york yankeesdj lemahieu
Copyright © 2021 ESPN Internet Ventures. All rights reserved.
More Videos
From CNN Newsource affiliates
TOP STORIES