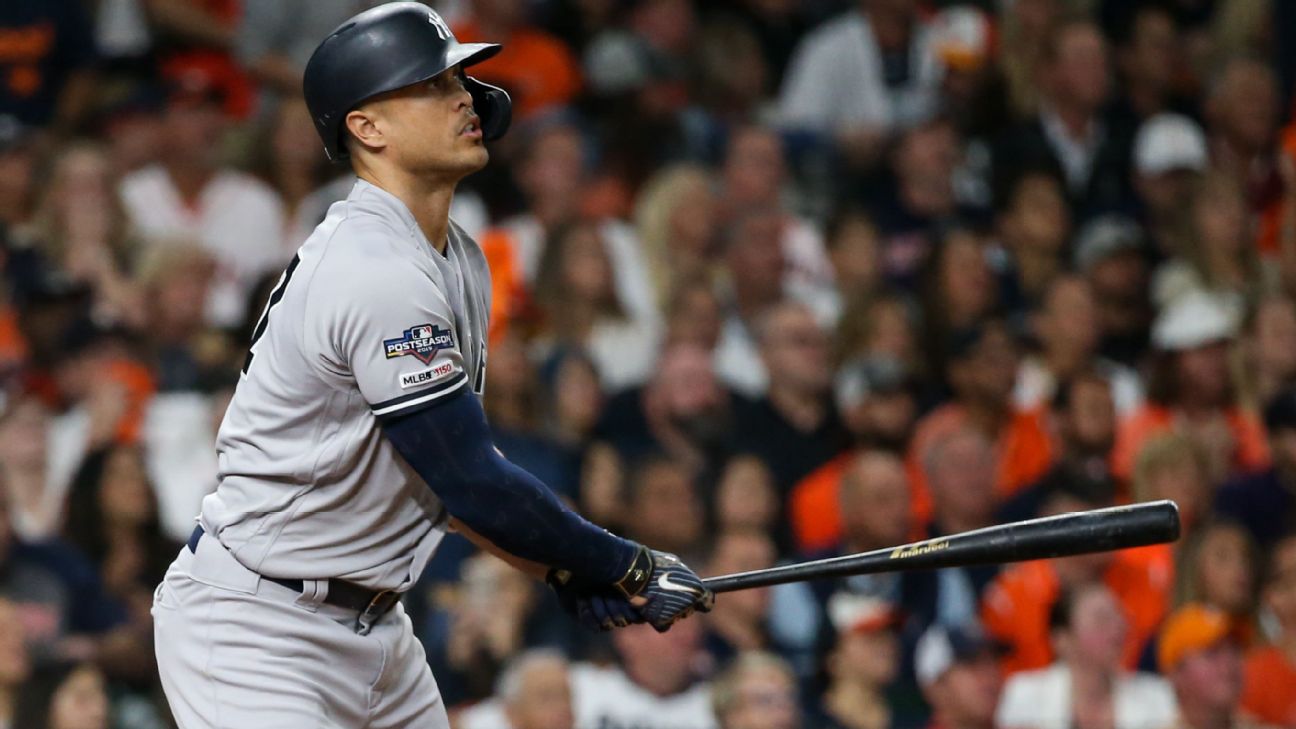 HOUSTON -- Outfielder Giancarlo Stanton was left out of the New York Yankees' starting lineup for Game 2 of the AL Championship Series against the Houston Astros after sustaining a right quad strain in his team's Game 1 win.

Manager Aaron Boone told reporters the injury occurred during Stanton's second-inning infield hit, in his first at-bat of Saturday night's series opener. He remained in the game and later homered.

Boone said Stanton underwent an MRI, which revealed the strain. According to Boone, Stanton was an option to pitch hit Sunday, but he did not end up entering the game.

The Astros would go on to win 3-2 in 11 innings to even the series at one game apiece.

The Yankees will see how Stanton responds in the next couple of days before making a decision about when he will return to the starting lineup.

"So, hoping that it's something that with today and the off day, that he would be back in play for Game 3," Boone said before Sunday's game. "We'll just kind of see how these next 48 hours unfold."

"So, obviously [we're] disappointed because we feel like G's really gaining some steam and having good at-bats and we know what kind of impact player he could be," Boone said. "But we know when we turn to Cam orAaron [Hicks]in this situation, we know what they can be."

Stanton was limited to 18 games during the regular season because of biceps, shoulder, calf and knee injuries. A strained right knee kept him out nearly two months before coming back Sept. 18.

An MRI was done Sunday that showed a strain in the quad on the same leg.

"I don't think it's a long-term concern," Yankees general manager Brian Cashman said. "Clearly, we're dropping him into the deep end of the pool because of playoff baseball and running him out there, the time frame getting him ready. His return-to-play protocols have been truncated. It's a worry of ours because of that. But again, this time of the year you got to do what you have to do to make sure that you can put him in the lineup."

Asked if shortening Stanton's rehab might have contributed to his getting hurt, Cashman replied, "It might have," but added: "It's just a guessing game."

"I'm not saying it is or isn't," Cashman continued. "I do know that was something that we discussed. You saw how he was used in Texas, during that series, and, you know, we're trying to, obviously, walk through it."