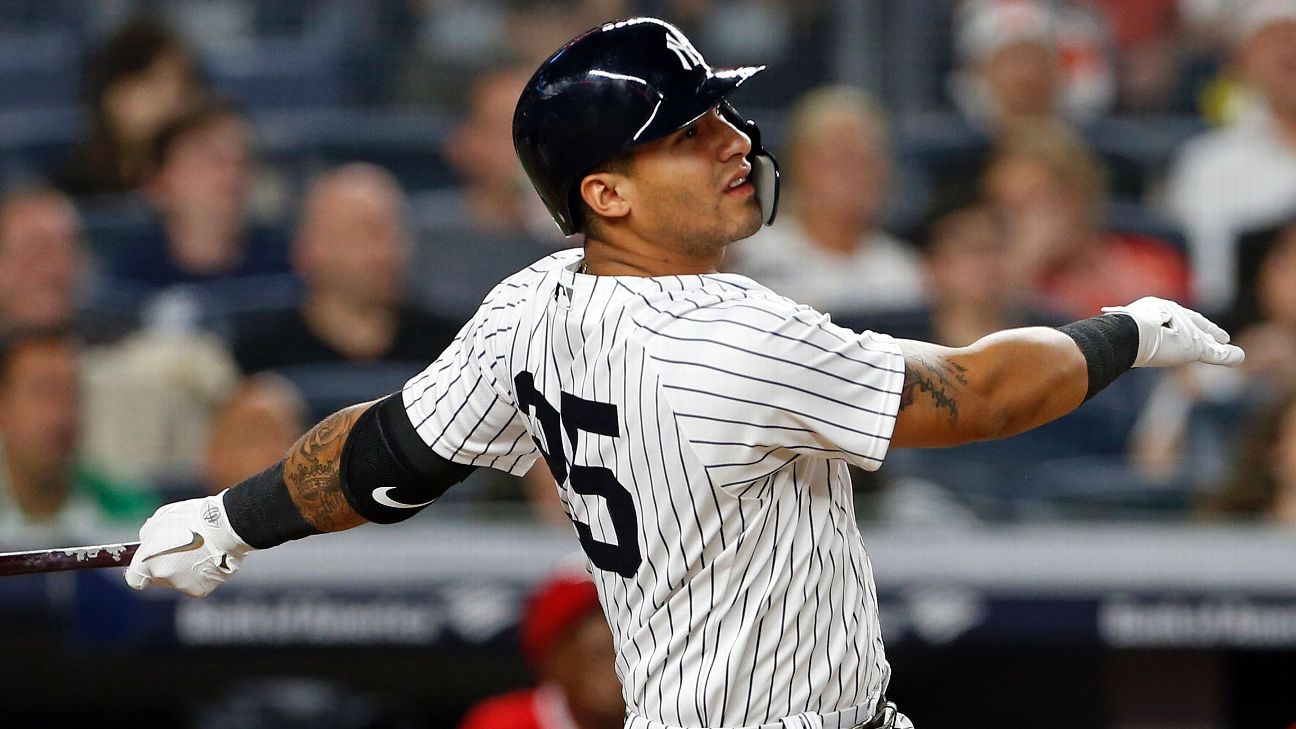 This time, the 21-year-old's history-making moment came with another one of the game's bright young stars, Shohei Ohtani, in attendance.

With his seventh-inning home run to right -- a 375-foot solo shot that proved to be the game's eventual winning blow -- Torres became the youngest player in American League history to have homered in four straight games. This latest big blow powered the Yankees to a 2-1 win Friday night over the visiting Los Angeles Angels.

"I heard the news," Torres said with a slight smile when asked about his latest accomplishment.

No player 21 years old or younger in the live ball era (since 1920) has homered in more than four straight games.

Earlier this week, in a series at Texas, Torres became the youngest player in Yankees history to hit home runs in three straight games.

Since his call-up from Triple-A on April 22, Torres' accomplishments have caused his name to regularly be mentioned alongside the likes of Yankees Hall of Famers Joe DiMaggio and Mickey Mantle, among others.

"I feel proud for that. I feel good," Torres said. "But I feel great because I'm helping the team and we win. That's what's important."

Across their past 28 games since Torres' arrival, the Yankees are 22-6. With a walk-off homer, a series of clutch base hits and this recent power surge (all nine of Torres' homers have come in May), the young second baseman has been a key contributor to the Yankees' success.

"No situation has been too big for him," Yankees right fielder Aaron Judge said. "It doesn't matter if we're down a couple runs, or we're up a couple runs or if we need a big hit, he always comes through. He just never looks like the moment's too big for him."

Yankees manager Aaron Boone says he believes much of that stems from how long Torres has spent preparing for his big league opportunity.

"He says, 'I've been preparing for this my whole life,' and certainly the last several years coming up in the minor leagues," Boone said. "He just plays the game with a lot of confidence, but his intelligence is very evident. And when you combine intelligence and instincts and talent, you're looking at what's been a very special player for us."

When the season began, Ohtani was the rookie who had swept the big leagues by storm. But during his clutch moment Friday, the Angels' designated hitter came up short, grounding out to end a Los Angeles threat.

That concluded an eighth-inning at-bat against Yankees closer Aroldis Chapman, who had been called upon to get four outs instead of his traditional three. The lefty-versus-lefty matchup featured a pair of players whose respective games hinge upon their own power.

According to ESPN Stats & Information, since his arrival to the majors this season, Ohtani -- who has registered 101 mph on the radar gun as a pitcher -- had never faced pitches of 100 mph or faster until Friday. When he sent a 100 mph Chapman fastball just wide of the left-field foul pole, he sent a hush over a Yankee Stadium crowd that had been booing him for much of the night.

"From my point of view," Chapman said through an interpreter, "I knew it was going to slice foul."

The pitcher came back and got Ohtani to bounce to short to end a potential Angels rally. Ohtani finished the night 0-for-3 with a strikeout and a walk.

As for Torres' seeming ability to regularly come through in similar spots, Boone said it was something his middle infielder simply had a knack for doing.

"I don't know if it's necessarily raising your game," Boone said. "It's more just, it doesn't get going fast in a big spot or against a tough opponent that's making pitches against you.

"It's still a game of failure and they're going to get you sometimes. But it is just the ability to kind of slow it down and not allow any kind of moment overtake you."