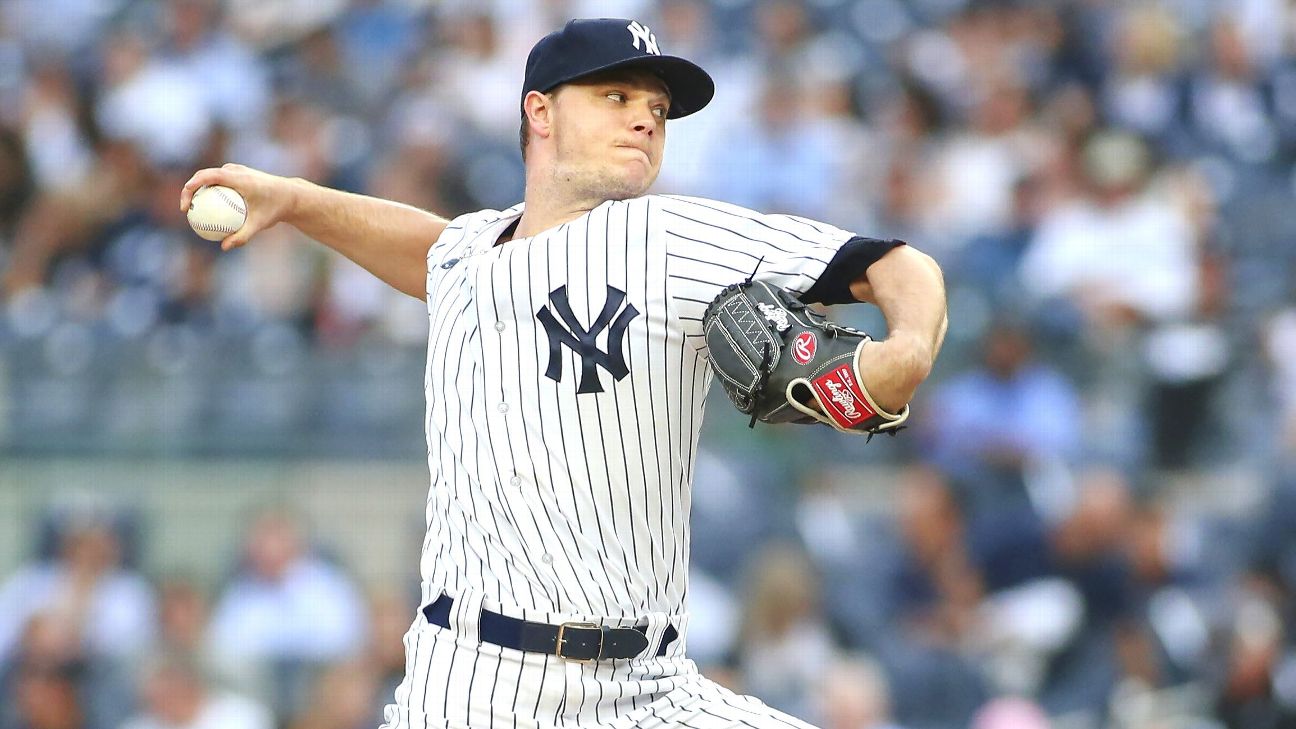 NEW YORK -- An embarrassed and disappointed Sonny Gray opened up Saturday night about his inconsistent starts in the New York Yankees' pitching rotation just after scuffling through one of his worst outings in pinstripes.

"That was embarrassing for me and for everybody in here," Gray said in the home clubhouse.

It was in the third inning of the Yankees' 11-0 loss to the rival Boston Red Sox that the embattled Gray was serenaded with loud boos from the more than 47,000 who watched the second game of this series inside Yankee Stadium. The night before, another sellout crowd roared its approval all throughout CC Sabathia's seven-inning gem in an 8-1 New York win.

Saturday's boos came as Gray walked off the mound after having allowed six hits and seven runs in an outing that lasted 2 innings. Just before he departed, cheers erupted throughout the stadium when Yankees fans saw manager Aaron Boone emerge from the dugout to pull the pitcher from the game.

"To play like we did [Friday] and to play like we've been playing and then to come out [Saturday] and kind of just spot them six runs in the first two innings, that's just disappointing."

With the loss, Gray's record dipped to 5-6. One night after getting back into a tie for first place in the American League East with the Red Sox, the Yankees fell back one game.

Gray has been like Jekyll and Hydewhen it comes to pitching at home and on the road.

On the road this season, Gray has a 3.28 ERA and has allowed just two home runs. He has walked 2.51 batters per nine innings and struck out 9.26.

At Yankee Stadium, he has an 8.25 ERA and has allowed seven homers, including Saturday's first-inning grand slam to Red Sox third baseman Rafael Devers. He has walked 5.75 batters per nine innings at home and struck out only 6.25.

Gray, who came to New York from Oakland as part of a trade-deadline deal last July, had trouble explaining the difference between how he has pitched at home and on the road.

Following this outing, Gray's career ERA in home starts at Yankee Stadium ballooned to 7.10. That's the highest among any pitcher in Yankees history with at least 13 home starts. He ranks second on the franchise list of the highest single-season ERAs in home starts with his current 8.25.

Gray added that he doesn't think he feels any added pressure from having to perform in a larger market.

"I don't know if 'pressure' is the right word. I mean, it's fun," Gray said. "I expect to come out and perform and make it fun, and the way I've thrown the ball, I don't think it's been fun. We're the best team in baseball four out of five days, and then I come out and do that. It just sucks."

Boone gave Gray a vote of confidence in saying he has no plans to stop pitching him in the Bronx.

"He has what it takes to pitch here and to pitch successfully," Boone said. "We've seen enough good outings from him where he's built some momentum. I know physically he's in a good place as far as his stuff, and now we've just got to unlock it. And one good outing, he can hopefully get the ball rolling here as well."

June had been a largely strong month for Gray, who went 2-1 in his previous five starts in the month. One of the wins was an eight-inning two-hitter at Toronto. In late May, he had an eight-inning four-hitter that resulted in a win at Kansas City.

"In a lot of ways ... [he's] pitched a lot better for the bulk of his last six or seven starts," Boone said. "But he has had a couple of hiccups in there that we have to keep working through with him."

After a promising start in which he retired the first two batters of the game, Gray's night was undone when Red Sox DH J.D. Martinezreached on an infield single. Yankees second baseman Gleyber Torres tried hard to make the tough out, backhanding the ball up the middle and turning into a Derek Jeter-esque jump throw. Martinez just beat the throw, and that started a rally that culminated with Devers' grand slam.

Since his arrival in New York, Gray has gone 0-4 with a 9.35 ERA against the Red Sox. He has allowed four home runs in those four starts against them. Still, he doesn't think it's accurate to say Boston has his number.

Gray also is 0-3 against the Tampa Bay Rays, having given up five homers in three outings against them.

"I'm well aware of all the ways I've struggled here. I just wish I knew," Gray said. "I just have to try to stay positive, and whenever I get the ball next, I get out there and put in a good week of work."