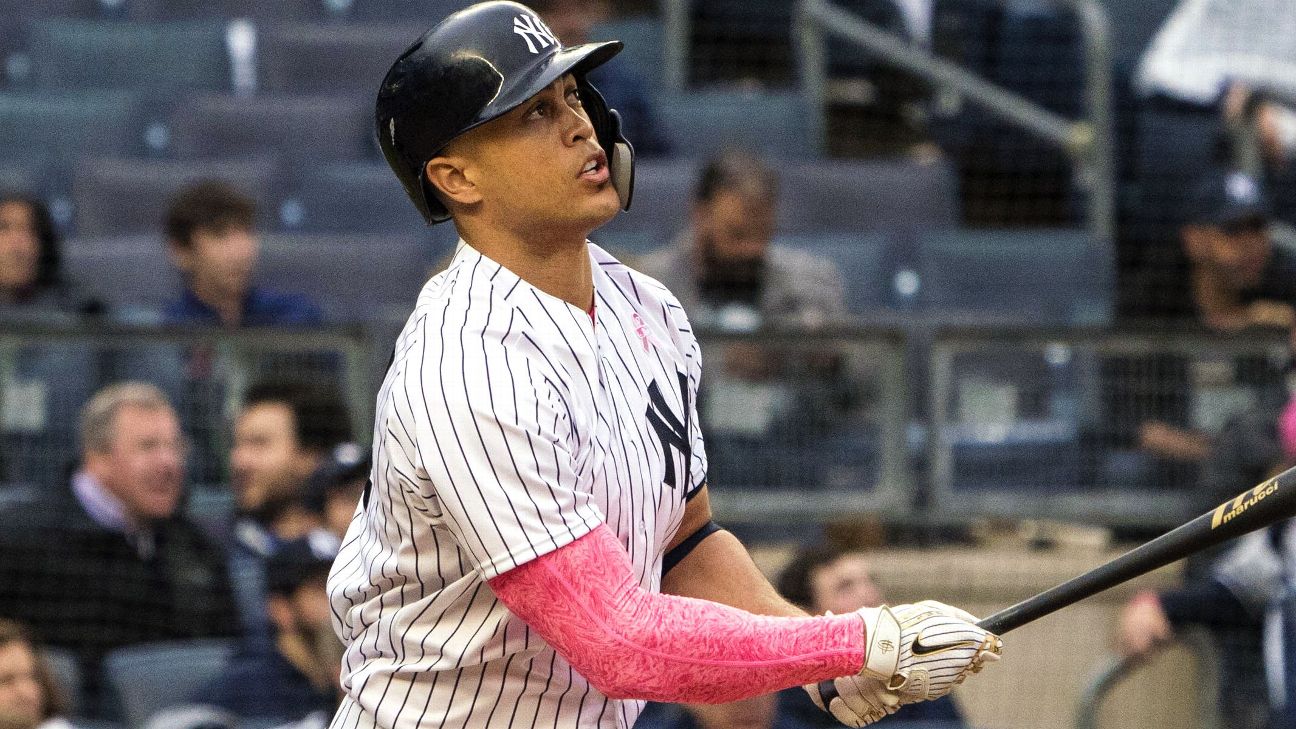 NEW YORK -- With nearly a quarter of the season in the books, the New York Yankees accomplished a franchise first Sunday.

When designated hitter Giancarlo Stantonsent a home run over the right-center-field wall during the Yankees' 6-2 winover the Oakland Athletics, he became the fourth Yankee this season to hit his 10th home run.

Before this year, the Yankees had never had four players hit 10 or more home runs by the team's 40th game of a season -- or by the 50th game, for that matter.

"Look, we have a really good lineup," manager Aaron Boone said. "I just love the way they go about it."

According to the Elias Sports Bureau, the Yankees are the first team since the 2003 Texas Rangers to have four players amass 10 homers within the first 40 games of a season. The quartet of Rafael Palmeiro, Carl Everett, Juan Gonzalez and Alex Rodriguez combined to achieve the feat for the '03 Rangers.

Before Stanton, Judge was the most recent Yankees hitter to reach 10 home runs, collecting his 10th and 11th in the first two games of the weekend's three-game series against the A's.

"We can hurt you at any time. And that's why I say my job is really just to get on base for these guys," Yankees leadoff hitter Brett Gardner said. "Once me, Judge and Didi and Stanton and Sanchez and [Aaron] Hicks and on down the order [get on], I mean, we've just got a lot of guys that can do a lot of different things, grind out at-bats and make the opposing pitching staff really work.

"We've got some guys that can really swing it."

Stanton's home run Sunday came in the fifth inning. With two outs and a 2-1 count, A's lefty Brett Anderson threw a 91 mph fastball that spun up and on the edge of the corner outside. Stanton turned on it and drove the pitch hard to the opposite field, putting it in the Yankees' bullpen for a solo shot.

The home run capped a 4-for-4 day for Stanton, who hit to all fields in his second four-hit game of the season. He had a pair of singles up the middle and slapped a double just inside the third-base line.

Although he struggled for much of the first six weeks of the season, Stanton has been turning it on of late, adding to the firepower of the Yankees' lineup. It has helped that he has faced his share of left-handed pitchers recently. Stanton has seen at least one lefty in 13 of the past 15 games he has played.

That's important because his numbers are dramatically better against left-handed pitchers than righties. Against right-handers this season, Stanton is batting .192 with a .622 OPS and three home runs. Against lefties, he is batting .457 with a 1.658 OPS and seven home runs, including Sunday's homer off Anderson.

"It's just a better look for a right-handed hitter," Boone said. "Anytime you're a righty with the kind of power he has and you can hit with slug the other way, usually it's a more favorable matchup when you're up against a lefty. Most of the lefties he's faced, from a matchup standpoint, matches up well with his skill set. And the ability to hit the ball out the other way is a real asset against a left-handed pitcher, typically. He's just had a lot of quality at-bats against them."

The next hit Stanton collects will mark a milestone. He is sitting on 999 career hits and will look to pass 1,000 when the Yankees travel to Washington for a two-game series beginning Tuesday.

Stanton goes opposite way for homer
Giancarlo Stanton smacks a solo home run to right-center field for his 10th long ball of the season.