Yanks' Gardner: Umpire 'lied to me' after ejection 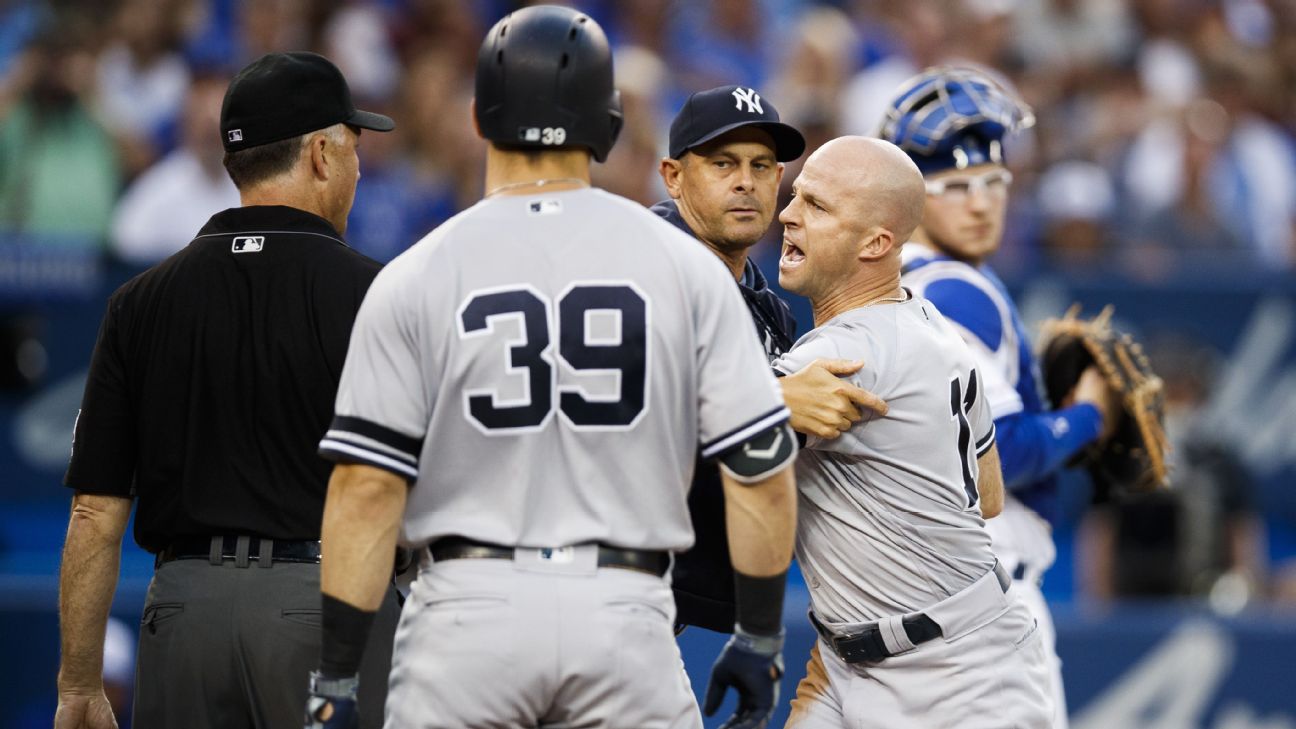 TORONTO -- Apparently even silence can have its consequences.

New York Yankees outfielder Brett Gardner learned that the hard way Friday night, when he was ejected from the visitors dugout in the fourth inning of the Yankees' game at Rogers Centre against the Toronto Blue Jays.

The rare scenario fully enraged Gardner the minute it happened, and it still so upset him afterward that he called the umpire who ejected him a liar in the minutes after the Yankees' 8-2 loss.

At the exact moment Gardner was tossed by plate umpire Chris Segal, cameras showed the center fielder sitting quietly on the bench with a bat in one hand and holding a water bottle in the other.

In the foreground, Yankees manager Aaron Boone could be seen voicing his displeasure at a strike call Segal made seconds before the ejection. At the same time, outfielder Cameron Maybin, sitting near Gardner on the bench, shouted a couple of words to Segal too.

"I think he heard some stuff from our dugout and threw somebody out, and frankly, had to come up with something," Boone said. "I thought it was a bad decision to throw somebody out of the game.

"To just pick somebody out, again, if you're going to do those kind of things, be correct in doing so."

How did Segal explain to Boone his reasoning for believing Gardner was the one shouting and needed to be ejected?

Gardner's ejection came in the middle of an at-bat by Yankees outfielder Mike Tauchman. After ruling a close, low pitch a strike, it appeared Segal had had enough of the chirping from the New York dugout. Before that call, the Yankees had spent much of the night angrily protesting other pitches they didn't think were strikes.

Immediately after calling the first-pitch strike, Segal took his mask off and glanced quickly in the Yankees' direction before turning and motioning forcefully with his right arm as he shouted: "Dugout. Gone."

Boone hopped off his first-step perch in response, with his hands out, trying to figure out who exactly had been ejected. Segal told him it was Gardner.

The Yankees say no warning was issued prior to the ejection.

"I didn't even open my mouth, which is unusual for me," Gardner said. "He just wanted to assume, or wanted to take a guess, and he was wrong. And then he lied to me about it -- which is a huge problem -- and that's what made me a little upset."

Boone was continuing to argue with Segal when Gardner realized he had been kicked out of the game. About 45 seconds after the ejection, a Yankees assistant sitting next to him on the bench told Gardner he was the one who had been booted. In disbelief, Gardner jogged out onto the field to find out the news for himself.

Very quickly, his plea of innocence turned into anger. Gardner started hopping in the direction of Segal and crew chief and first-base umpire Dan Iassogna as Boone and Tauchman tried holding him back. Gardner slipped out of their grasps a couple of times but never got particularly close to the umpires.

"Gardy's as competitive and as fiery as they come, and if you're going to get kicked out of a game, you want it to be justified and warranted," Boone said. "So I understand how fired up he was, and I found out how strong he was trying to hold him back.

"He's quicker than me, he's faster, younger, stronger, all of it."

Tauchman, who dropped his bat to get a better grip on his teammate, also found out just how slippery and feisty Gardner can be.

"At that point, I just wanted to make sure there wasn't anything like an incidental contact or anything that could cause him to miss some time, because he's incredibly important to our team," Tauchman said. Admittedly, Tauchman thought the "borderline" pitch he took was also "probably on the plate."

Eventually, Gardner was walked back to the dugout by Boone and Iassogna before collecting his batting gloves and a bat and walking down the steps that lead back toward the clubhouse.

It was the fifth career ejection for the 35-year-old Gardner.

After the game, Segal didn't make himself available to a pool reporter, but Iassogna spoke in his role as crew chief.

He didn't say much.

Asked whether he thought Segal might owe him an apology after he watched the tape, Gardner blurted out: "Not interested."

While Gardner might have been silent during the at-bat that led to his ejection, moments earlier he could be seen making a racket in the dugout as the Yankees bemoaned a called third strike on outfielder Maybin, the hitter who batted one spot before Tauchman.

As Maybin took a pitch that was just below the strike zone tracker used by game broadcasters YES Network and Sportsnet Canada, Gardner was in the dugout jamming his bat into the ceiling. At the same time, Boone and bench coach Josh Bard were yelling at Segal about the call.

Gardner was sitting in about the same spot in the dugout during both close calls.

"Last time I checked, that wasn't against the rules," Gardner said of his bat-ramming display. "Just super frustrating. Just when you think you've seen it all -- I don't even know what to say."

As speechless as Gardner might generally have been about the entire situation, he was rather pointed in his comments about what type of consequence should befall Segal and his umpiring crew. He doesn't foresee any coming their way.

"Of course there's not going to be," Gardner said. "No accountability whatsoever. Probably doesn't have to talk to anyone about it, unfortunately. Wanted me out of the game, and that was that.

"Just be better at your job. It's an example of a young umpire and the game's moving too fast for him, some guys are getting in his ear."

Segal, who has split his time working at both the major league and Triple-A levels since 2014, is 37.

Following his ejection, Gardner was replaced in the batting order by Aaron Judge, who was getting the day off. Judge checked in to right field, forcing Maybin, who started in right, to move to left, and Tauchman to move from left field to center, where Gardner had been playing.

"That makes me madder than anything," Gardner said of Judge having to play on his off day. "That's the last thing I would do is do something to get intentionally thrown out, and him having to come in off the bench like that."

Tauchman's fourth-inning at-bat ended with a different set of fireworks. He homered to right to put the Yankees on the scoreboard. It was his 12th homer of the season. 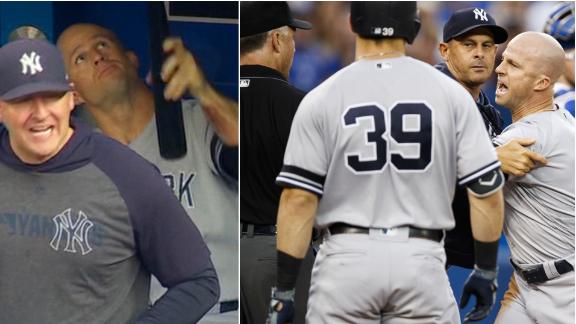 Umpire mistakenly ejects Gardner
Brett Gardner gets tossed by the plate umpire, who apparently thought Gardner was complaining about a called strike, when it was actually other Yankees yelling at the ump. 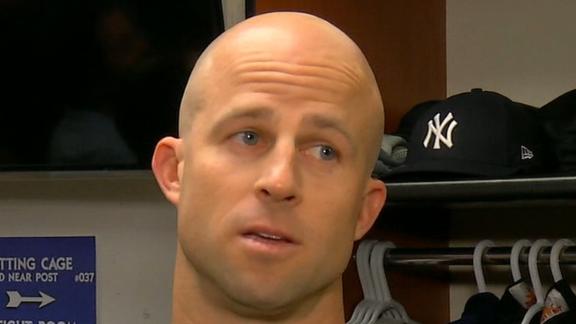 Gardner had no idea he was tossed
Brett Gardner explains how his fifth career ejection unraveled, admitting he had "no idea" his actions warranted a removal from the game.
Report a correction or typo
Related topics:
sportsespnmlbnew york yankeesbrett gardner
Copyright © 2020 ESPN Internet Ventures. All rights reserved.
More Videos
From CNN Newsource affiliates
TOP STORIES