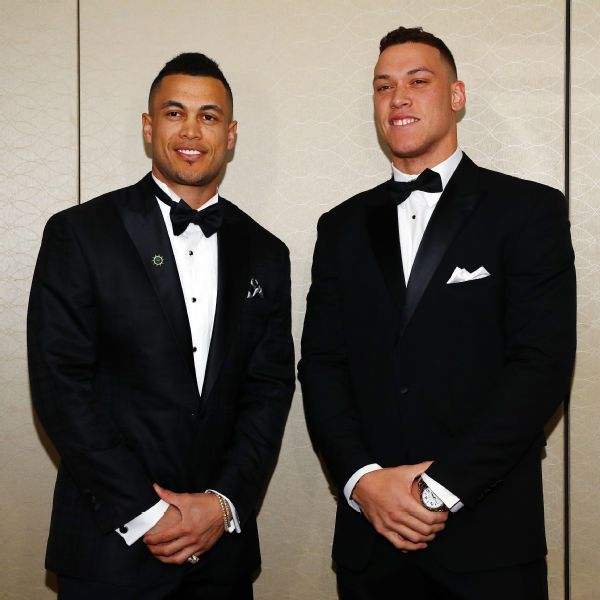 NEW YORK -- Giancarlo Stanton and Aaron Judge sat side by side on the dais, together in public for the first time as Yankees teammates.

The towering duo joined several of the game's top stars in attendance Sunday night as the New York chapter of the Baseball Writers' Association of America held its 95th annual dinner.

Acquired by the Yankees in a December trade with Miami, the 6-foot-6 Stanton was on hand to collect the National League Most Valuable Player award after leading the majors with 59 home runs and 132 RBI last season.

"This has been an amazing ride and I'm excited to be here in New York and experience the big city, bright lights, and this is going to be a lot of fun for me," said the eight-year veteran, drawing loud applause.

Standing a smidge taller at 6-foot-7, Judge took home his own share of hardware. The 25-year-old outfielder was selected New York player of the year and also received the Joe DiMaggio Toast of the Town award.

Stanton and Judge are expected to form a powerful 1-2 punch in the Bronx for years, drawing comparisons to Mantle and Maris or Gehrig and Ruth.

"Not only is this going to be great for the Yankees and Yankee fans, it's going to be tremendous for baseball," said broadcaster Bob Costas, the Ford C. Frick Award winner who presented Judge with a trifecta of honors. "It's one thing to be effective and to be excellent and it's another thing to have a quality of myth and legend about you. Giancarlo already does and Aaron, in short order, already does."

Judge also picked up his AL Rookie of the Year award, won unanimously by garnering all 30 first-place votes. Second in the majors behind Stanton with a rookie-record 52 homers, the hulking slugger finished with 114 RBI while leading the AL in runs (128) and walks (127).

"An award like this is never an individual award. It's always a group effort from the people that support us day in and day out," Judge said, acknowledging his parents in the crowd. "I could never repay you guys for all the baseball tournaments you've driven to, the times I forgot my cleats at home and (you) had to go back and get them, so thank you."

"I feel extremely blessed," the three-time batting champion said. "I really need to thank my teammates, too. They were the ones that made me an MVP."

Carlos Correa was given the Joan Payson/Shannon Forde award for community service after the 23-year-old shortstop helped lead hurricane relief efforts in his native Puerto Rico.

"The hurricane hit and I didn't know anything about my family. I couldn't contact them," Correa said. "Seven days without talking to my family until I finally got the call. I don't think I got one hit that week. I wasn't able to focus on baseball."

World Series MVP George Springer was the recipient of the Arthur and Milton Richman You Gotta Have Heart award for overcoming a lifelong stutter and setting a positive example for others dealing with speech and communication disorders.

The outfielder's father, George Springer II, accepted the award while his son celebrated his honeymoon.

Indians ace Corey Kluber acknowledged several people when accepting his second AL Cy Young Award, including the man who presented it to him -- new Mets manager Mickey Callaway, who was Kluber's pitching coach in Cleveland.

"I'd like to say a special thank you to Mickey," Kluber said. "I think we were able to do a lot of very special things together we should be proud of, and I know that the people in New York are going to be excited to get to know him a lot better now."
Report a correction or typo
Related topics:
sportsespnaaron judgemlbcarlos correanew yorknew york yankeesbanquetjustin verlanderwritersdinnerjose altuvegiancarlo stantongeorge springerawardscorey kluber
Copyright © 2022 ESPN Internet Ventures. All rights reserved.
TOP STORIES
3 dead, at least 50 injured after Amtrak train derails in Missouri
Video: Giuliani slapped on back inside supermarket, worker arrested
Investigation continues after 7-year-old drowns at rented pool in NJ
Video shows man stealing puppy, riding off on scooter in NYC
AccuWeather: Picture perfect
Westchester Co. reproductive healthcare legislation up for vote
2022 Jimmy Award finalists step into the spotlight
Show More
NYC mayor takes aim at garbage piles, illegal dumping
'Full House' star shoved by police during Roe protest, video shows
Truck carrying fireworks catches fire on I-287 in NJ
Actor Danny Bonaduce opens up about battling mystery illness
Staten Island judge invalidates NYC's non-citizen voting law
More TOP STORIES News