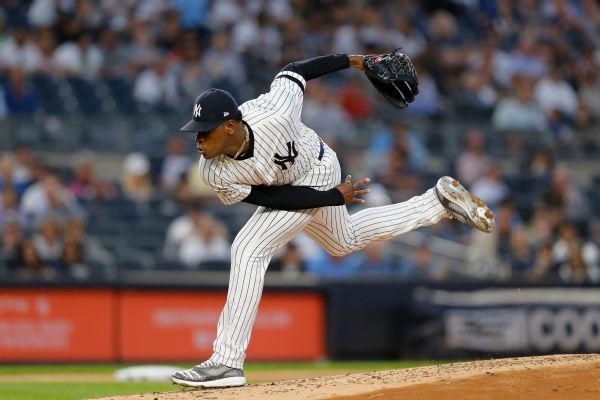 NEW YORK -- Luis Severino got Albert Pujols to reach for a slider with runners at the corners and ground into a double play that ended the first inning of his season debut, then punched the pocket of his glove to celebrate.

New York's ace was back on the mound, in time to make an impact in the postseason.

Severino pitched four dominant innings and reached 98.8 mph in an 8-0 win over the Los Angeles Angels on Tuesday night that moved New York to the brink of clinching its 21st postseason appearance in 25 years.

"It was exciting. It was fun going out there and hearing the fans," Severino said.

A two-time All-Star, Severino got hurt while warming up before his first scheduled spring training appearance on March 5.

He began tentatively in Game 152, opening with a 12-pitch walk to Brian Goodwin, but got sharper and allowed just a pair of singles.

"All his pitches were nice and crisp," the Angels' Luis Rengifo said.

Severino walked two and struck out four, throwing 47 of 67 pitches for strikes and leaving to an ovation from fans tracking his pitch count.

"Looked pretty good out there, pretty sharp," catcher Austin Romine said. "We need Sevy where we're going. He's pitched some big games for us, and we look forward to him pitching some more big games for us."

Severino had seven swings and misses on fastballs and two on sliders.

"My fastball command I think was great. I still need to work a little bit more in sliders to left-handers," he said.

Severino was 19-8 with a 3.39 ERA in 32 starts last year but struggled late in the season. The Yankees at first diagnosed Severino with shoulder inflammation, but when the 25-year-old right-hander failed to improve he was sent for an MRI on April 9 that revealed a strained latissimus dorsi muscle. He didn't throw off a mound again until a bullpen session on Aug. 9 and made three minor league injury rehabilitation appearances from Sept. 1 to 11.

He started in a groove.

"Another huge step back for him," Boone said.

New York lowered its magic number to one over Cleveland to clinch the Yankees' 55th postseason appearance -- 22 more than any other team. New York's magic number dropped to two over Tampa Bay to wrap up the Yankees' 19th AL East title, their first since 2012. And at 99-53, the Yankees are on the verge of their 21st 100-win season, their first in back-to-back years since 2002-04.

Jonathan Loaisiga(2-1) followed Severino with two hitless innings as part of a six-hitter against the Angels, who are already assured of a losing record at 68-83.

Angels: Rengifo left in the seventh after hurting his left hand on a swing and miss against Stephen Tarpley. X-rays were negative and he will have more tests Wednesday. "As soon as I started to swing, kind of felt like a pop," Rengifo said. ... INF Tommy La Stella, who hasn't played since fracturing his right tibia with a foul ball on July 2, made the trip. La Stella, who is from Westwood, New Jersey, still is feeling discomfort.

Yankees: OF Giancarlo Stanton, limited to nine games this season, is due back Wednesday or Thursday after recovering from a knee injury. Stanton has been sidelined since straining the posterior cruciate ligament in his right knee on June 25. ... Maybin was shaking his left wrist in the late innings; the wrist has bothered him since August. "It crops up on him in certain games," Boone said. "Probably won't start him tomorrow." ... DH-1B Edwin Encarnacion (strained left oblique) will not swing a bat this week. ... C Gary Sanchez (strained left groin) remains in the treatment phase of his recovery. ... Happ had a cortisone shot Friday to treat biceps tendinitis in his pitching arm and anticipates making his scheduled start Thursday.

Sabathia makes his final regular-season start at Yankee Stadium on Wednesday, and German could follow in his second straight relief appearance as New York limits his innings. Left-hander Dillon Peters (3-3) starts for the Angels. 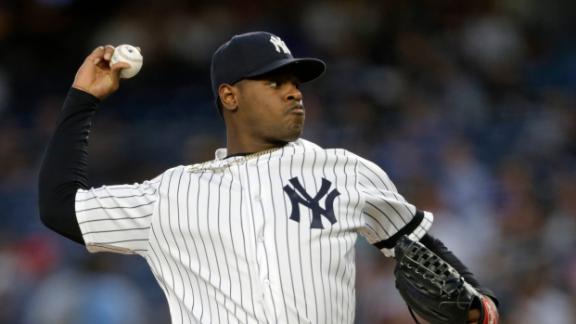