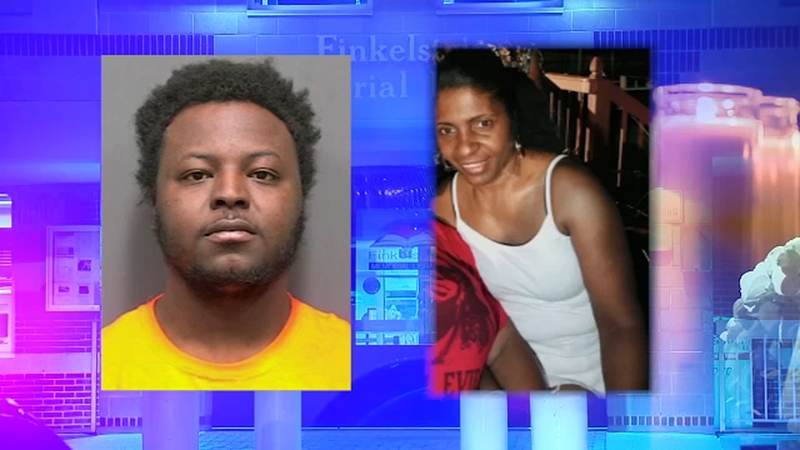 SPRING VALLEY, Rockland County (WABC) -- A Rockland County community bid a final farewell Monday to a security guard who was stabbed to death inside their local library.

The Finkelstein Memorial Library has turned into a memorial for Sandra Wilson, who was honored at a wake for family and friends at Spring Valley's First Baptist Church, followed by a homegoing service and burial at Brick Church Cemetery in New Hempstead.

"The community and town is greatly, greatly mourning her loss," brother Ronnie Wilson said. "But today we celebrated her life, and we're going to move forward."

Her heartbroken family brought her coffin to the church, where it is said that lives are changed and souls are saved. Wilson was the mother of three and a new grandmother.

"They are hurt, devastated, they are angry," said Kenneth Nash, the victim's former husband. "It is just a hard thing to know that your mother was brutally murdered, taken away at such a young age."

Friends and co-workers were also trying to understand the unexplained nature of this tragic event.

Police say Wilson had asked 25-year-old Blanchard Glaudin to turn down the music on his phone when he allegedly stabbed her. Patrons held him until police arrived, and he has been charged with second-degree murder.

Glaudin is also the suspect in an attempted rape that happened at Nyack Hospital months ago, in which he allegedly attacked a patient in the middle of the night. Bail was set at $100,000, but he was somehow let out without posting it.

It remains unclear how or why he was released when the charge was a bail-worthy offense even under the state's new bail reform law.

"I just think the laws should be changed," daughter Ka'liyah Nash said. "People shouldn't be let out onto the streets. Everybody should be protected. My mom didn't deserve this at all."

Now, they mourn her loss.

"God will continue to strengthen you," Kenneth Nash said. "The pain will never go away, but he will strengthen you to get through each day."

The library reopened its doors Monday afternoon, after Wilson's funeral was complete.

"The smile and the greeting she had for everybody, her honesty and her integrity," library director Laura Wolven said. "She will be so so missed."