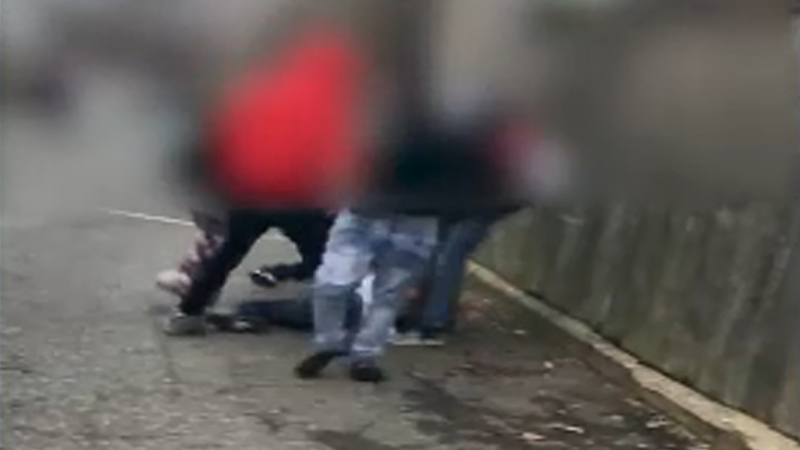 HUNTINGTON, Long Island (WABC) -- Eyewitness News has located cell phone video - now being looked at by Suffolk Police - which shows a violent attack on a teenager in the same parking lot where three alleged MS-13 gang members are accused of stabbing a fellow student.

The cell phone video from January 9, which first appeared on the website Huntington Now, shows approximately six boys punching and kicking a boy lying on the ground. At one point, one of the suspects runs and jumps on the victim's head. The incident happened behind the Burger King on Route 110 in Huntington Station near Huntington High School.

Suffolk Police said they arrested a 16-year-old boy and charged him with assault. They said the victim did not suffer serious injuries. Police are still looking for the other individuals involved in the assault in the video.

Police said the cell phone video shows a fight that happened within the hour of a Huntington High School student being stabbed in the back, also outside the Burger King, by three alleged MS-13 gang members.

Police arrested Ramon Lopez, Nobeli Zuniga and Oscar Molina, who are all unaccompanied minors and Huntington High School students. Their attorneys have denied their clients are members of MS-13.

Police said they are still trying to determine whether the incidents are related, but they have increased patrols at the Burger King following school dismissal.

"We're hoping there aren't more incidents, but we're being careful and increasing patrols, both marked and unmarked units, in the area during dismissal time," said Inspector William Scrima with the Suffolk County Police second precinct.

Scrima said no fights have been reported in the parking lot since the two incidents on January 9.

"There are several cameras in this area, but we also want to see how we can build better infrastructure and how we can also share that information between our town, our county and also with our police department," he said.

Police are urging anyone with information about the identifies of the individuals in the cell phone video to call police at 1-800-220-TIPS. All calls can remain anonymous.