Police crack down on abandoned cars in Stamford 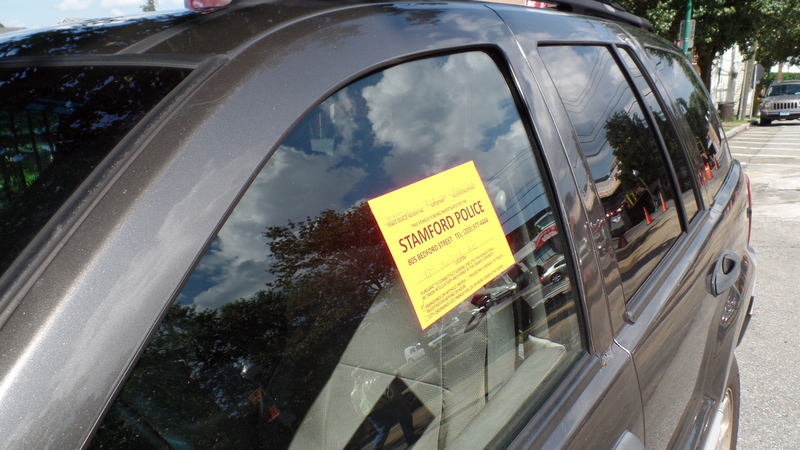 Police crack down on abandoned cars in Stamford

STAMFORD, Connecticut (WABC) -- A major push is underway to clear abandoned cars from the streets in Stamford, Connecticut.

Over 75 vehicles have been targeted for towing this week. "We want to get them out as quick as possible," says Stamford police lieutenant Eugene Dohmann. "It's really about quality of life."

Police say they regularly receive complaints from residents about unattended cars left on their street for weeks or months. Vehicles are often ditched because they no longer run, were stolen or used in crimes.

An abandoned Jeep in front of a farmer's market on Stamford's west side was the kind of vehicle that filled Sheila Williams-Brown with questions.

"Where's the police?", she wanted to know. "Who's enforcing it? Who's supposed to be towing it? Why are they still there?"

This week police began aggressively addressing those concerns, fanning out across the city, looking for abandoned vehicles. They have been slapping bright orange stickers on them and removing the license plates.

After 24 hours, they'll be towed. Cops look for obvious signs as with one pickup that was packed with furniture, old rainfall water dripping from the back.

"There's flat tires, lots of dust, the tires are starting to deflate," said Lt. Dohmann. "Sometimes they're not obvious and the neighbors stop and complain."

Clearing the eyesores also frees up parking spaces in a growing city like Stamford. But police say it's a matter of public safety as well.

"Young kids like to play in them, God forbid they get caught in the trunk of an abandoned car," said Lt. Dohmann. "That's the worst case scenario. Drug dealers hide drugs in abandoned cars."

If the vehicles tagged go unclaimed after being towed, their next and last stop is the scrap heap.