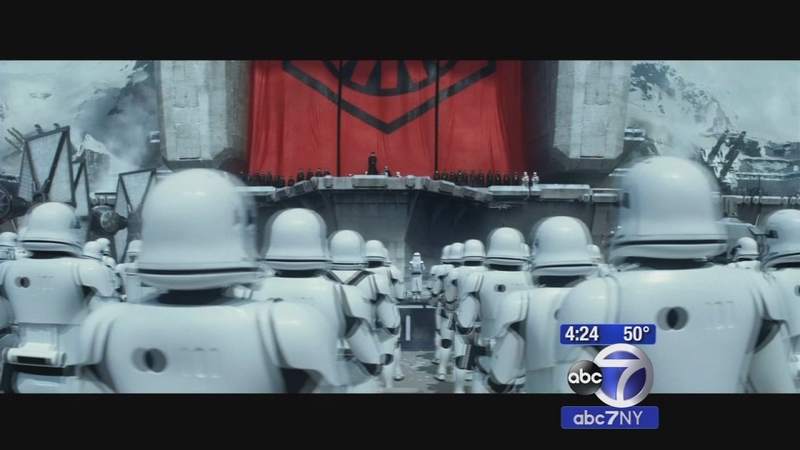 NEW YORK (WABC) -- "Star Wars: The Force Awakens" is easily the most anticipated movie of 2015, and now that the latest installment of the blockbuster franchise that spans generations is officially hitting theaters across the country. But does it live up to the hype?

There was no shortage of applause at the first public screening of the movie on the east coast, and it is now time to shove aside all the buildup and judge the film purely on its own merits.

The Force Awakens with the introduction of two new characters, a stormtrooper with a conscience and a scavenger he meets on the desolate planet of Jakku.

The future rests on the shoulders of actors Daisy Ridley and John Boyega, who prove more than up to that task and also quite worthy of sharing the screen with Harrison Ford, reprising the role of Han Solo along with trusted sidekick Chewbacca.

The mix of older characters with newer ones is what director JJ Abrams gets just right, ensuring his film will satisfy Star Wars fans who longed for the legacy to continue and their kids, who can now truly understand what all the fuss is about.

Young and old are joined in the resistance to a new evil force known as The First Order. Darth Vader's Dark Side successor, Kylo Ren, proves worthy of his villainy, just as BB-8 is up to the standards of his droid predecessors.

Good guys and bad guys alike are looking to find Mark Hamill's Luke Skywalker character, high stakes that are matched by the acting of stars as diverse as Oscar Isaac and Lupita Nyong'o, though her fans may not recognize her.

The best special effects are those that are more understated, and the cumulative effect is impressive. The film is much better than the last Star Wars movie, just not quite as magical as many hoped. Still, it's easy to see why fans find it so satisfying.

"Star Wars: The Force Awakens" has sold more than $100 million worth of tickets in advance, and it's likely to be one of the biggest hits of all time, up there with "Avatar" and "Titanic."