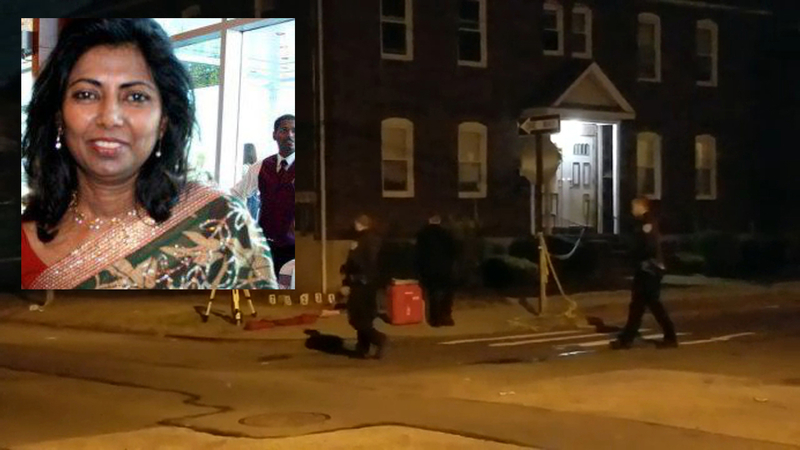 RANDALL MANOR, Staten Island (WABC) -- Authorities say a man fatally stabbed a Staten Island woman, and then slashed a neighbor who rushed to her aid.

63-year-old Geetha Howie was stabbed to the face and torso just a block from her home at Bement Avenue and Bement Court in the Randall Manor section just before 2:15 p.m. Monday.

She was stabbed more than a dozen times and pronounced dead at Richmond University Medical Center.

The suspect, 27-year-old Dantey Moore, was then confronted by a neighbor, who was slashed in the arm.

By the time police arrived, Moore had dropped his knife and was cradling the victim in his arms, investigators said.

Responding officers saw his hands were bloodied and the knife was near him.

"At one point he finally dropped the knife and he crouched down behind her and just cradled her and he stayed there until the police showed up," said Mark Long, the neighbor who came to help.

Moore now faces charges of murder, assault and criminal possession of a weapon.

Long, 56, was treated for a small laceration and released.

Detectives do not believe the suspect knew his victim and there is no obvious motive. He may have been high on drugs, they said.

Police say the suspect randomly targeted the grandmother on her way home from the bank. "It sounded like a combination of squealing and screaming and my initial impression was that there were kids out here playing and roughhousing," said Long. "When it got a little louder I thought I should come out and take a look, and that's when I saw what I saw."

Long saw the woman on the ground defenseless.

"I yelled at the man to stop, he got up and took a swing at me with his knife and I got a tiny nick on my arm. I feel horrible about what happened to her and I've been thinking about her family and we've been keeping them in our prayers."