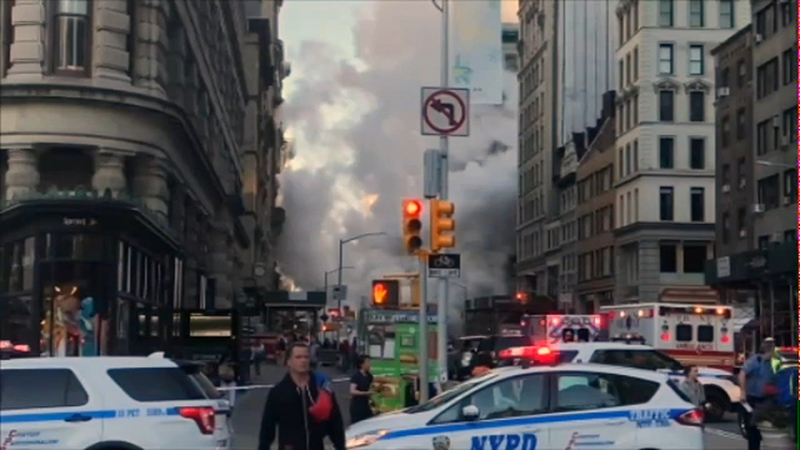 FLATIRON DISTRICT, Manhattan (WABC) -- Dozens of buildings were evacuated and hundreds of people were displaced from homes and offices by Thursday's steam pipe explosion in Manhattan.

Anyone who was in the area at the time of the rupture of the pipe and the subsequent raining down of debris in the Flatiron District was advised to bag their clothing and shower.

The police department alone decontaminated 100 officers and traffic agents who spent any time at all in what they have come to call the hot zone.

Earlier, officers suited up in their thickest, most protective gear to help retrieve valuable medicines or pets from people's homes. Some are off-limits until this weekend.

"People obviously had to evacuate in a hurry and they didn't have a chance to plan for it," said Sgt. Dan Conforti of the NYPD Strategic Response Group.

They ran from steam and asbestos-laden debris that spewed through their neighborhood Thursday morning, rendering nearly four dozens buildings uninhabitable.

And despite assurances from the city, there were fears that the air just isn't safe.

"Looking down there, there were quite a few people wearing masks and the light bulb went off in my head I have to go and get one," said neighborhood resident Delissa Reynolds.

But the geyser of steam produced only a trickle of people seeking help at a center set up by the city and the Red Cross.

"I don't understand where all the other residents of the area are, that's totally weird," said Dara, who had been pet sitting a friend's cat when the steam pipe blew. She came for help finding it.

Shay Koll appeared with his 5-year-old and a sample of the dirt that rained down on their terrace and them, as they ate their breakfast Thursday morning five blocks away from the break.

"Covered like furniture and plants and kids' toys and stuff," said Koll. "We're trying to understand if it's really a big deal and if we should proceed with caution or just continue as it was before."