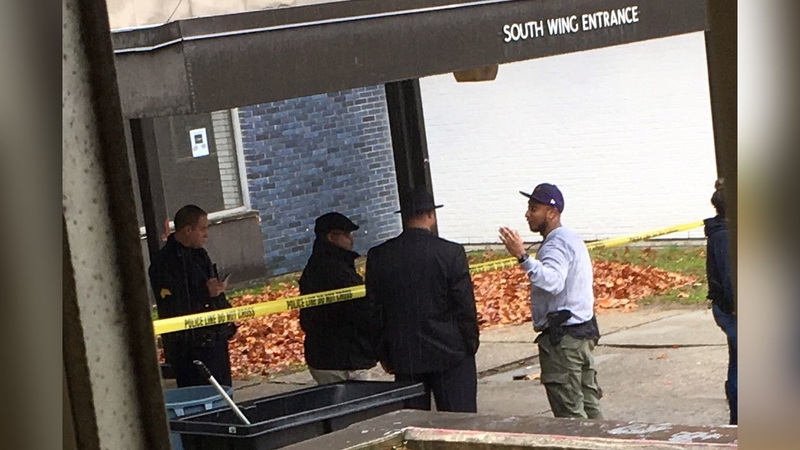 Suspect arrested in stabbing of student at Mount Vernon school

MOUNT VERNON, Westchester County (WABC) -- Police say a student is under arrest in connection with the stabbing of another student Wednesday at Mount Vernon High School.

The victim was taken to Jacobi Medical Center with stab wounds to the back.

The wounds are not considered to be life-threatening.

School officials say the victim is a student who is at an alternative high school, and was at Mount Vernon High School to meet with a counselor.

As the victim was leaving, he was stabbed in front of the school.

In all of the chaos, someone then stabbed the suspect in the bottom. He took off.

Police set up a perimeter. He was eventually found and placed under arrest.

The suspect is at New Rochelle Hospital.

Following the stabbing, parents rushed to the school. Jean Parish received a text from her son Joshua to 'come and get me immediately', saying he was very scared.

The 11th grader was inside Mount Vernon High school, which for part of the day, was on lockdown.

The violence unfolded just after noon. The victim was seen lying in front of one of the entrances to the school.

A student named Djenai looked out of her classroom windows and couldn't believe what she saw.

"Blood on the boy and him passed out right there in front of the entrance, it's sad," she said.

It's not clear what sparked the attack. Things didn't end there.

Students say while they were being held in the cafeteria, there was more violence.

"There were like 3, 4 fights, one by one everybody fighting, hitting each other, everybody getting injured and every time the security guards would break it up, they'd bunch together and start fighting again," said student Thomas Brooks.