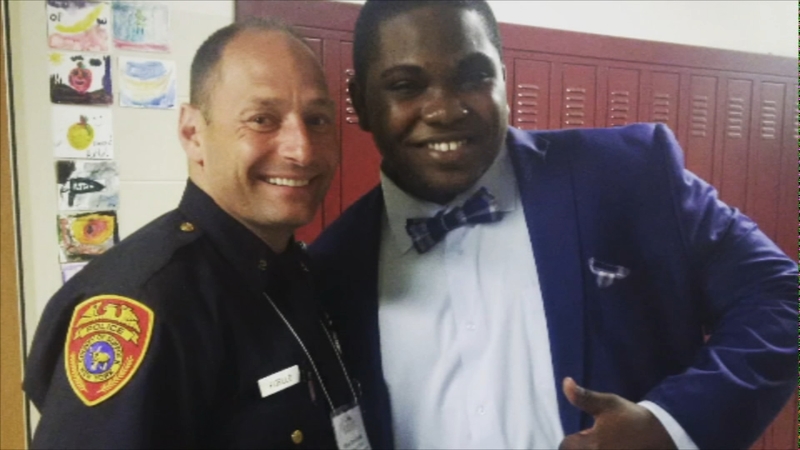 Student credits officer with setting him on the right path

HUNTINGTON, Long Island (WABC) -- There is a big push to bring outreach programs to the schools, this after modern-day problems for kids involve gangs, active shooters on campus and opioid addiction.

There is a new approach for police in Suffolk County and one student says it turned his life around.

"I strongly believe I would have died, murdered, that's what I believe," said Alexander Plasir, high school senior.

Alexander was running with the wrong crowd. He was a freshman at Walt Whitman High School in Huntington, Long Island, determined to make his mark.

"I thought that maybe if I could show these guys that I'm a mean, tough guy, that they would say, 'Oh I like this guy, he's number one,'" Alexander said.

He was barely 14 years old. But after a series of close calls and a three-week suspension, he was stopped in the hallway by Suffolk County Police Officer Drew Fiorillo.

"He actually cared about me and I was like, wow an officer, not just an officer but a white officer really cares about me, I had to take that seriously," Alexander said.

Officer Fiorillo was one of a number of Suffolk police officers assigned to reach out to kids like Alexander.

Deputy Commissioner Risco Mention-Lewis says the department is adjusting its tactics to face new challenges. Not just advising schools on security, but intervening to stop gangs from recruiting boys like Alexander.

"I think young people don't really care where the hand comes from as long as it's genuine," Dep. Commissioner Mention-Lewis said.

"And when kids see police officers in their building, not as a threat, but as an advocate, as someone they can lean on, someone they can talk to other than maybe their circle that opens up doors of opportunity," said Ed Casswell, Center Moriches High School Principal.

Alexander says it changed his life.

"Every time I see him at events, we take pictures, we laugh, he says, 'Alexander, how are you, buddy what's going on?'"