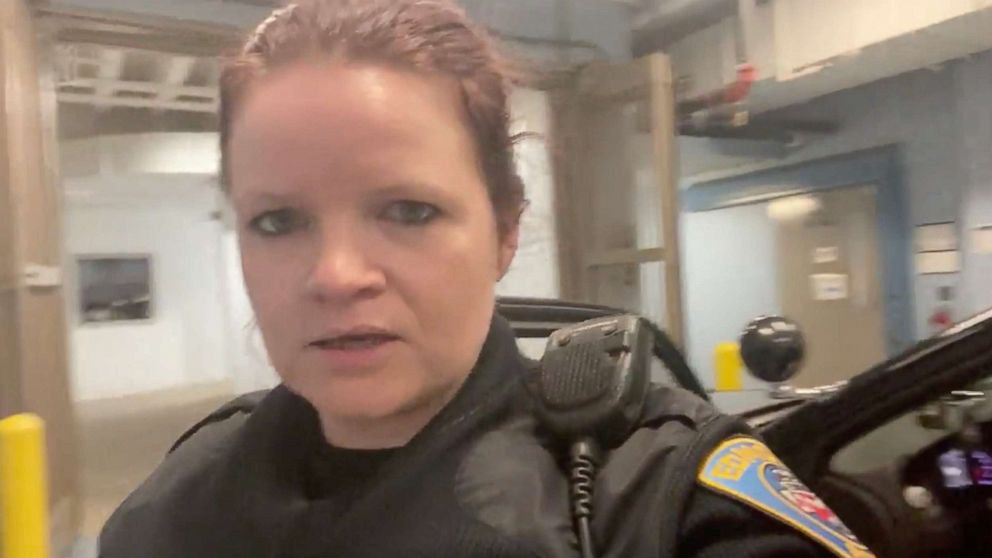 Torrey Rowe became hooked on police work and forensics through watching the TV show "CSI" back in the early 2000s. But after signing up for a mentorship program with the Oklahoma City Police Department during her senior year of high school, she realized the profession was much different in real life.

"I did some real ride-alongs with the crime scene unit with Oklahoma City and it just made me fall in love with the profession and the field even more," she told ABC News. "I was on tunnel vision for law enforcement from there on out."

Rowe, now 34-years-old, has been a police officer for over seven years with the Edmond Police Department in Oklahoma, where she is also a patrol technical investigator. In that role, she assists with taking fingerprints, capturing photos and collecting evidence. She works the overnight shift, sleeping during the day and working all night until 7 a.m.

"Some of my friends think I'm crazy because they're like, 'How do you sleep during the day? How do you work all night?'" Rowe said. "But for right now, for me, it's worked for years."

As the coronavirus pandemic spread through the country, Rowe has had to adapt her work as a police officer to new limitations and challenges.

Rowe stopped conducting minor traffic stops. She's focusing only on policing threats to society and major crimes as well as responding to calls for service. This has resulted in some misconceptions in Edmond. She said a couple of people who were recently pulled over for a DUI had been confused because they thought police were only pursuing felony charges.

"Obviously, DUI is a threat to public and society so ... they were just mistaken on that and I think that that kind of got around," she said.

Since the coronavirus spread, Rowe has seen an increase in intoxicating substance calls. She said Edmond has had about five overdoses involving heroin laced with fentanyl, one of which was fatal.

"That's a huge problem in Oklahoma right now, currently, not just in Edmond," Rowe said. "There's actually two young men that died a couple days ago from pills that look like oxycodone that are actually fentanyl and we have our Oklahoma Bureau of Narcotics that are investigating that right now."

Rowe said the crisis is affecting everyone, even children, who are used to being able to hang out with their friends. She recently responded to a call where a 7-year-old was going through a difficult time.

"We just had to sit there and explain to him ... these are the times now. This is weird for all of us. Weird for adults, weird for kids," she said.

In audio diaries she recorded, Rowe leads ABC News through her experiences as a police officer and how she has seen the effects of the coronavirus, COVID-19, in her community. Her personal story can be heard in this week's episode of the ABC News podcast "The Essentials: Inside the Curve."

"I know it sounds crazy, but I went last year with my mom and we had a total blast and she wanted to go again this year," she said. "So I'm like, 'Hey, if mom wants to go and deck out her face with the face paint, I'll do what mom wants to do.'"

Rowe also enjoys running and was planning to complete an annual relay run with her colleagues for the Special Olympics opening ceremony in Oklahoma.

Her last photo from a time when she said life felt normal before the pandemic shows her and three of her friends covered in mud after completing a mud run.

"It was a really nice day," she said. "That was before runs and everything started shutting down."

As Oklahoma has started to ease stay-at-home restrictions and businesses have started to reopen, Rowe has seen an increase in calls.

"Lots of people that are fighting, cooped up in [their] home and not getting along with each other... Lots of different types of drugs going on," she said. "It's just kind of been just crazy, crazy, crazy times right now."

Despite the challenges of the current situation, Rowe is thankful for the support she has seen from members of the community, who have donated products such as hand sanitizer and masks.

"It's been pretty amazing, even just if they're dropping off goodies because they know that we're dealing with a bunch of craziness right now," she said. "Our community is ... amazing."