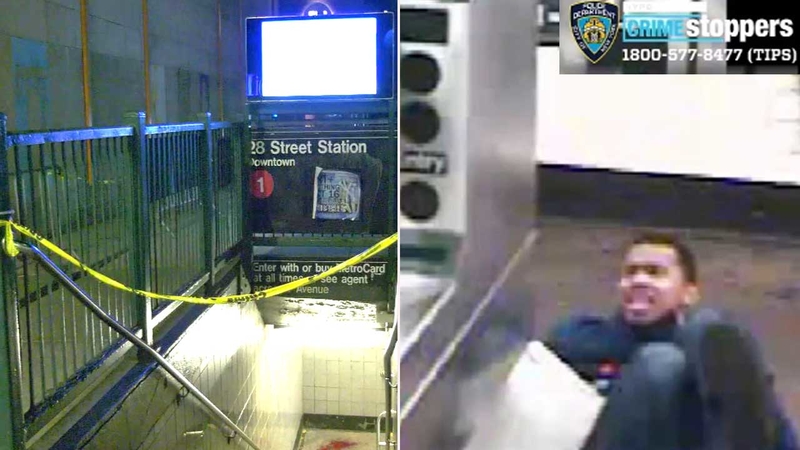 NEW YORK CITY (WABC) -- Police are investigating yet another case of violence in the New York City transit system - and it comes as officials urge riders to stay alert amid a rise in subway crime.

"The more people who ride, the more people are there to be victimized," said Lisa Daglian of the MTA Permanent Citizens' Advisory Committee. "And so don't be a victim. To the extent that you can, pay attention to where you going, make sure that your eyes have not buried in your phone and look around you. Be aware of your surroundings."

A 23-year-old graphic designer was hospitalized following an attack at an MTA station in Chelsea Monday night.

The victim was waiting for the train and looking at his phone when he was suddenly attacked by a man with a glass bottle.

The victim was struck over the head multiple times with a bottle on the southbound 1 train platform at 11:40 p.m.

"I saw the guy walk towards me but I, I didn't like, mind," the victim said. "I didn't focus on the guy that I know he's walking towards me but I just continued doing my stuff. And then suddenly he attacked me."

The victim was taken to Bellevue Hospital., where he required two dozen stitches. No arrests have been made.

"I think, like, it's just I'm unlucky and I'm an open-minded person," the victim said. "So I would ride the subway. I don't think this kind of thing would happen to me again. I will be careful. Definitely don't, don't stand on the edge and look at your phone. Somebody's gonna come up behind you. Yeah, I will be careful."

At an MTA board meeting just a few hours earlier Monday, an NYPD inspector said crime in the transit system is on the rise, fueled by a 50% increase in thefts.

Many of those victims were falling asleep or not paying attention, police say.

But robberies are up too - 18% percent compared to this time last year, as ridership has doubled.

Crime trends were a topic of discussion among board members.

"I think those have been crimes of opportunity," said board member Andrew Albert. "I don't feel at all scared when I ride. I would tell everybody the same thing: know who's around you when you ride."

Officials do say that crime over all this year is down.

But as ridership has increased this fall, so have the crime trends.

Among the other transit cases the NYPD is working to solve is another violent crime that happened earlier this month in Greenwich Village.

The man seen in surveillance pictures is accused of stabbing a 26-year-old man during an argument shortly after 4 a.m. on October 2.

This happened near the turnstiles inside the West 4th Street A/C/E station.

Police are asking for the public's help tracking down the suspect.