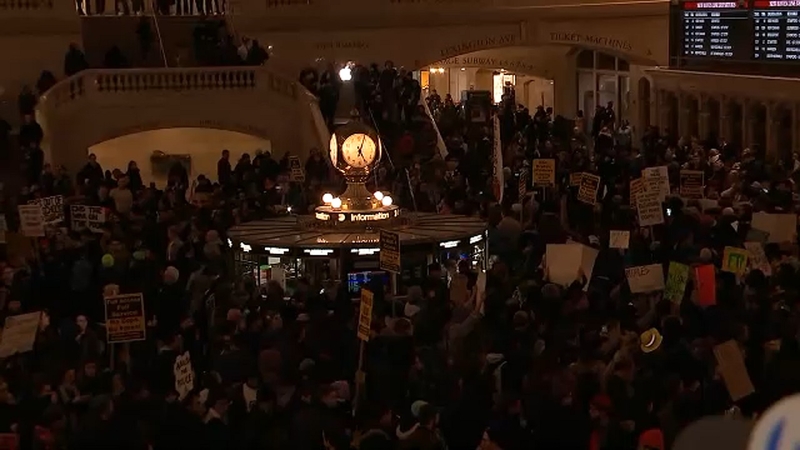 Arrests made at Grand Central amid large subway protests

NEW YORK (WABC) -- Protesters linked arms and packed into the Great Hall, where under the clock, they hoisted profane signs - and dared police to do something about it.

It’s moments like these when you feel like the income inequality situation is boiling over in New York. Huge numbers of demonstrators, many of them young, converge on #GrandCentralTerminal in massive protest over transit fares and police crackdown on fare evasion. pic.twitter.com/2oeLHrHktC

Before long, they finished in Grand Central and surged across the city in a dramatic conclusion to a day of disorder.

Across the transit system, activists vandalized MTA infrastructure to make their point that public transit should be free, and that police should back down from enforcing crimes like turnstile jumping.

Protesters took that fight directly to police, and kept police guessing about where they were headed - into the subway and out - however, the NYPD was ready.

Banners were also unfurled in Brooklyn and at the World Trade Center Oculus promoting the protests, called "(Expletive) Your $2.75," with organizers saying the goal is to remove officers from the subway system and provide for free transit.

The action, dubbed #J31 for January 31, or #FTP3, is the third in a string of protests against police in the subways.

The protests started after the arrest of a 15-year-old in Downtown Brooklyn that was caught on camera.

The group marched through Downtown Brooklyn and then in Harlem in November.
They say the added police are targeting minor crimes in the city's subways and are discriminatory against minorities.

Dozens of people were placed under arrest.

Officials say a protester threw a hammer through the plate glass window of a Chipotle at 111 Fulton Street, sending glass flying into a woman eating her dinner. She was hospitalized with non-life threatening injuries.