Subway crime: How to stay safe, what to do if you spot something 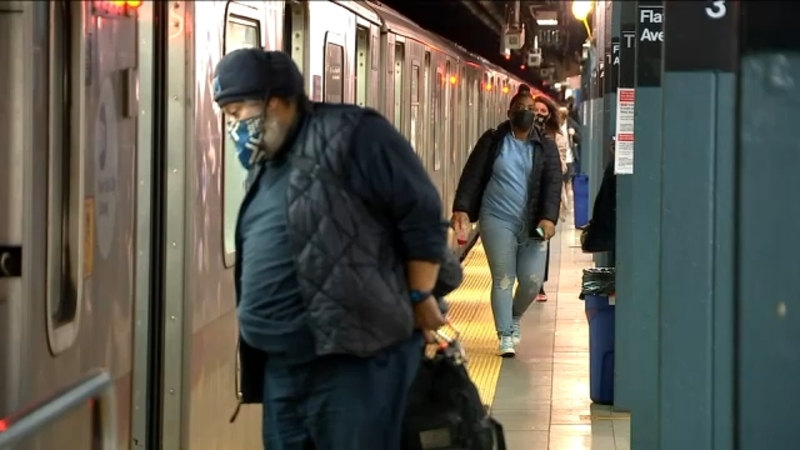 Tips to stay safe on the subway, and should you step in?

NEW YORK CITY (WABC) -- The dramatic jump in crime in New York City subways is keeping riders on the edge of their seats, with crimes up 70% over this time last year.

One reason is that passenger counts remain below normal. But if you see something bad happening, what should you do? Jump in and help? Run away to stay safe?

Tensions are high, and riders are feeling the fear.

"That's the first thing, that fear, and the taste of nickels in your mouth," straphanger Sandra Brown said. "Like, you won't know what to do."

Derick Waller reports that subway crime continues to surge, even as Mayor Eric Adams rolls out his crime prevention plan.

Subway rider are wondering, what would I do if violence strikes?

"I'd like to that think I'm prepared, but obviously I don't think we are," rider Katie Williams said.

Stay away from the platform edge, standing back until the train is in the station.

"The potential for someone attacking you just got cut in half," he said.

Have your MetroCard or OMNY ready so you aren't fumbling around at the turnstile, and then remain vigilant throughout the entire system. Also, try to board in the middle of the train, near the conductor.

"People like to be unbothered, alone," he said. "Not in the subway. Be where other people are."

He recommends staying near the middle of the car.

"I like to stand, because standing gives the impression you're in control," Fox said. "Sitting, the person is over you."

""If somebody attacks you, remove yourself from the situation," he said. "You want to strike back? Don't do it. Don't do it, because you don't know what that person is capable of."

And what if you witness a attack, should you try to step in?

"We all want to record it," he said. "Call 911 first. There's apps you can use to report crimes now. And then if you can safely get a picture of the person."

Even knowing those tips doesn't make most feel any secure.

"I don't feel safe anymore, I really don't," Brown said. "I have never felt like this living in New York for past 42 years."

If you see something, say something. Tell a police officer or an MTA employee or call 888-NYC-SAFE or 911 with emergencies. Additionally, members of the public can also text 911.

More transit tips:
--No matter where you are, is to always pay attention to your surroundings and know your location
--Avoid burying your head in a cell phone or playing music on your headphones so that you can monitor what is going on around you
--Protect your back and beware of anyone approaching you from behind
--Have your money or metro card available
--Sit in the center of the car, away from the door, to avoid a purse or a chain snatch
--Cover jewelry; turn stone rings toward the palm side of your hand
--Ride in the conductor's car during off-peak hours
--Stay awake, aware and exit with the crowd
--While waiting for the train, stand in the middle of the platform, away from the yellow platform edge strip
--Sit near the front of the bus