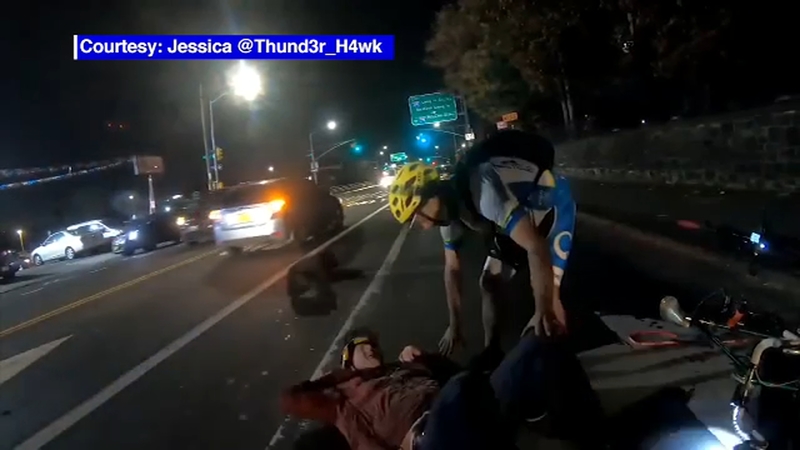 SUNNYSIDE, Queens (WABC) -- Police are investigating after a bicyclist stopped at a red light in a bike lane in Queens was rear-ended by a hit-and-run driver Monday night.

The incident was reported at Greenpoint and Borden avenues in Sunnyside around 6 p.m.

Police say the driver of a grey 2006 Toyota Sienna did not stay at the scene.

Another person on a bicycle came upon the injured bicyclist and called for help.

The bicyclist suffered a back injury, but he is expected to be OK.

The same driver is also wanted for striking another Toyota two blocks away at Greenpoint and Bradley avenues, at around the same time, and also leaving that scene.

A 37-year-old female passenger in that car was treated for minor injuries.

John Farrell was cycling home from work at the time and witnessed the incident.

"I just saw the van plow through the guy, he was in a lot of pain and his bike was destroyed," Farrell said.

Farrell said he was hit last week and the incident could have been so much worse.

"His bike the back of it's gone, which means to me the next thing is him, it's a scary moment, you're not in a car, don't know where you are, think you are OK and you just want to be OK," Farrell said.

The bike lane is dangerously sandwiched between two driving lanes and it is poorly marked with little lighting.

Farrell and others want police to issue reckless drivers more violations and for the city to create more protected bike lanes.

"The West Side Highway is a good example, the bike lane runs the length of Manhattan and Queens Boulevard, if they were better at enforcing the law, that would be a wonderful place to ride," he said.