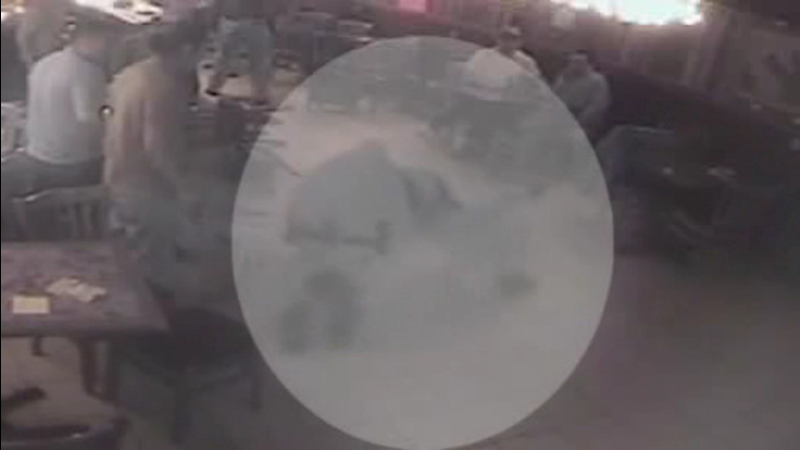 SUNSET PARK, Brooklyn (WABC) -- The NYPD is investigating some of their own after some double-barrel allegations involving how police handled a bar brawl.

Did they destroy a video of when they arrived at the scene? It is a wildly controversial story.

It all started when a brawl broke out among customers after a boxing match they all watched on TV.

A bouncer pushed two men out of the bar, and one of the men with long hair tried to get back in several times.

When the police arrived, an officer and the bouncer tried to subdue the patron, who resisted, and they eventually got him on the ground.

In the lower right portion of the video, you can see an officer's foot moving.

"I see the cop on the floor kneeing him, more than five times, probably around 7 times. His knee in the back brutally," said Kevin Cuzco, the owner's son.

Kevin, in the bright colored t-shirt, understood the need to arrest the man, but thought the police were being too violent.

On the video, you see him getting very close to the officers, and some might call this interfering with police.

"I have the right to speak out and say, 'It's not right for you to be doing that, he's on the ground,'" Kevin said.

The police told Kevin to get back inside the bar.

It is not clear what Kevin says, but the officer pushes Kevin twice and again, the tension increases until several other officers join in, pushing Kevin in.

Back inside, the police take Kevin down.

Kevin needed staples to close the gash in his head.

"That was handled completely inappropriately. The de-escalation that could have taken place did not. It just escalated," said Javier Nieves, of El Grito de Sunset.

Later, Kevin's mother says, police told her she should never have called them.