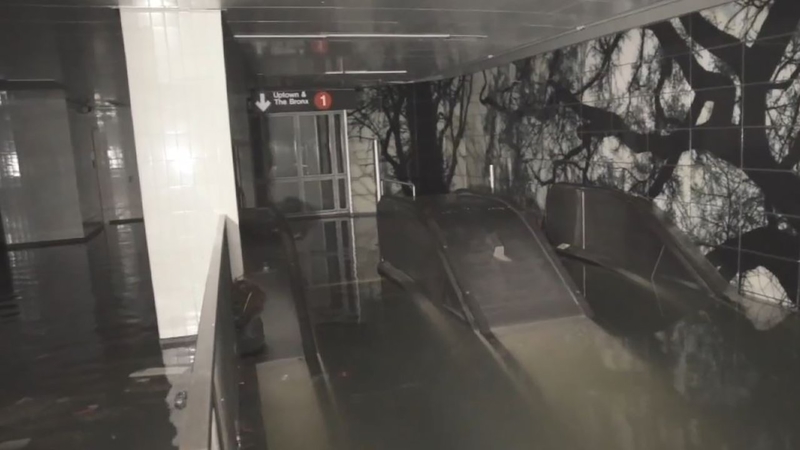 SOUTH FERRY, Manhattan (WABC) -- Nearly five years after Superstorm Sandy ripped through the South Ferry subway station in Lower Manhattan, the No. 1 train station is once again open to straphangers.

The storm completely flooded the station, and while hundreds of millions of dollars were being spent on repairs, 1 trains were forced to stop at the old South Ferry station that only fit the first five cars.

The station, at Manhattan's southern tip, was inundated with water up to its ceiling during Sandy. Flood waters climbed to the top of large banks of escalators at the station, which had been newly renovated three years before the storm.

"It wasn't wrecked," MTA chariman Joe Lhota said. "It was destroyed from top to bottom."

The MTA estimated in February 2013 that fully restoring the station would take up to three years and cost $600 million. And on Tuesday, it was the people who came flooding in, down the stairway and into a gleaming newly rebuilt station.

Seven long banks of escalators that were filled with flood waters have been rebuilt and are back working, and the lobby that was also filled with water that damaged every turnstyle is now inviting workers and tourists to a fully functioning station.

The flooding shut down a system that relies on electricity coursing through thousands of switches and miles of cables. Racks of switches and terminals in the relay room, all of which were new in 2008 prior to the station reopening in 2009, were destroyed.

A look at the new station:

New 1 train entrance at South Ferry to open today after it was destroyed in the super storm Sandy. @ABC7NY pic.twitter.com/Gn3R97ayuV

Workers putting the final touches in time for the reopening of the South Ferry station that was destroyed during superstorm Sandy. @ABC7NY pic.twitter.com/YNUHlUZ8PM