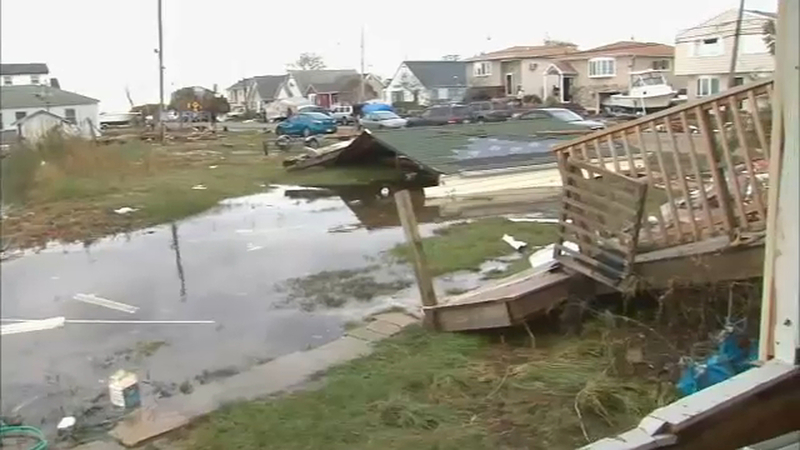 BABYLON VILLAGE, Long Island (WABC) -- A task force studying how Suffolk County recovered after Superstorm Sandy struck the region in 2012 has released a set of recommendations.

"I'm used to this, this is just life now," said Randy Stewart, seven years to the day after Sandy changed everything for him and his family in Babylon Village.

There was another high tide and another flood in his community Tuesday, as navigating the soggy streets is almost like a water sport these days.

"It doesn't go away anymore," said Stewart. "It used to be once in a while. Now it's more frequent than not."

It is almost like PTSD for Randy, who went through the brutal process of raising his home, which had cringeworthy results while our cameras were rolling three years ago as the house toppled off risers and had to be demolished.

"I"ve since rebuilt but overall, Sandy is seven years, I've been home for a year," he said.

With stories like that in mind, a 31-member task force in Suffolk County released more than 100 new recommendations Tuesday.

They range from the tangible, like the solar powered shelters they recommend, said to be cheaper than hotels or FEMA trailers, to more broad ideas.

Those include a Nassau/Suffolk 'HUB' for all storm needs, better training so contractors comply with regulations or face stiffer penalties, and a permanent Reconstruction Advocate Program.

"To help those in the most vulnerable situations and most complex situations navigate the recovery process," said task force chairman David Calone.

For Randy, it has meant more than $100,000 out of his pocket, and five lawsuits against contractors. The task force is hoping to spare others.

These are only ideas. Implementing them is another story. The critical question now is, can Mother Nature wait?