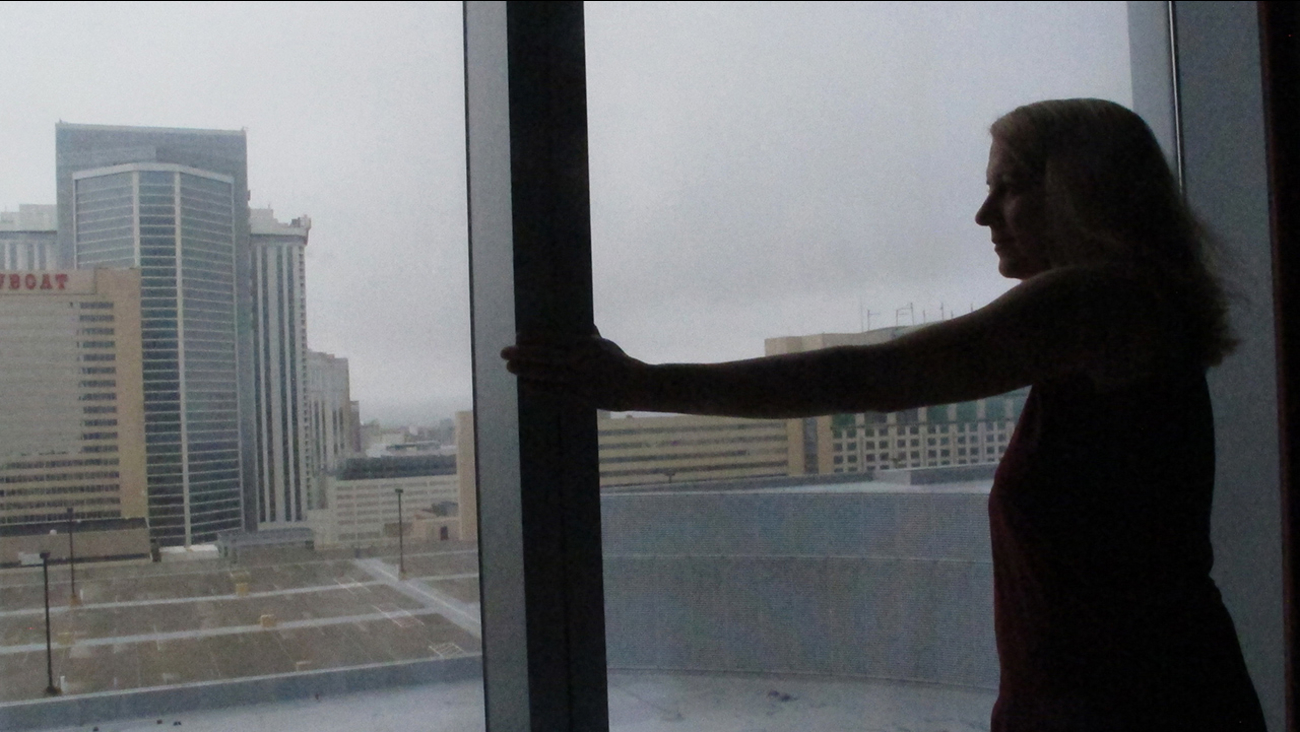 Mimi Razzi of Pawleys Island, S.C. looks out the window from her room at the Ocean Resort Casino in Atlantic City N.J. on Friday Sept. 14, 2018. (AP Photo/Wayne Parry)

ATLANTIC CITY, New Jersey -- Jennifer Liebelt and her family were rescued by boat from their home in Union Beach, New Jersey, as Superstorm Sandy destroyed it in 2012. Rather than rebuild, they moved to Wilmington, North Carolina - where Hurricane Florence threatened their new home this week.

This time, there was no question of riding out the storm; she, two brothers, two sisters, her mother, a cousin and a cat piled into cars and headed north, hoping to squeeze in with relatives in New Jersey.

But on the way, she heard Ocean Resort Casino in Atlantic City was offering to house - for free - people from areas threatened by the hurricane until it had passed.

"I didn't think it was real when I heard they were giving out rooms," said Liebelt, a communications graduate student at the University of North Carolina.

As of Friday, the casino had reserved over 600 room nights for storm victims; another 200 families were expected to arrive on Sunday. The free stay offer will run through next Wednesday night.

"We were rescued by boat from our last house during Sandy; we didn't want to go through that again," Liebelt said. "But my mother didn't want to leave, so we went there and got her out. We convinced her it was better not to stay and watch everything being slowly destroyed. It's better to just leave and then come back and see what has happened all at once."

Mimi Razzi and her family left Pawleys Island, South Carolina, ahead of the hurricane, and heard about the hotel offer on the drive north.

"I'm just speechless that a place like this would open its doors and its heart to us," she said. "This is what life is supposed to be about: doing good for another person. It has been an absolute blessing for our family, a godsend."

Their home is a five- to 10-minute drive from the ocean. She and her husband worked for 20 hours preparing the house as best they could, boarding up the windows, carrying all the electronics up to the second floor, shutting off electric, gas and water service, emptying the refrigerator - and praying they would have a house to return to at all.

"The amount of fear and stress we were experiencing - I was starting to crack," she said. "I really was. I broke into tears several times on the drive up."

The casino even allowed evacuees to bring their pets with them, including Razzi's dogs Tammie and Scooter, who were running around excitedly and jumping up on the hotel beds.

The reaction on social media to Deifik's gesture has been overwhelmingly positive, even as some questioned whether it might be a ploy to coax people to gamble in the casino.

"I might play a tiny bit, but the reason we're all here is because a hurricane may destroy our homes, and we're waiting to see what happens with that," Liebelt said. "I don't feel like this is an inducement to get people to gamble. I think it was done out of the kindness of his heart.

"It's easy to think of rich people, particularly in this day and age, as the bad guys: heartless and cold," she said. "It's incredible to see how much this owner really cares."