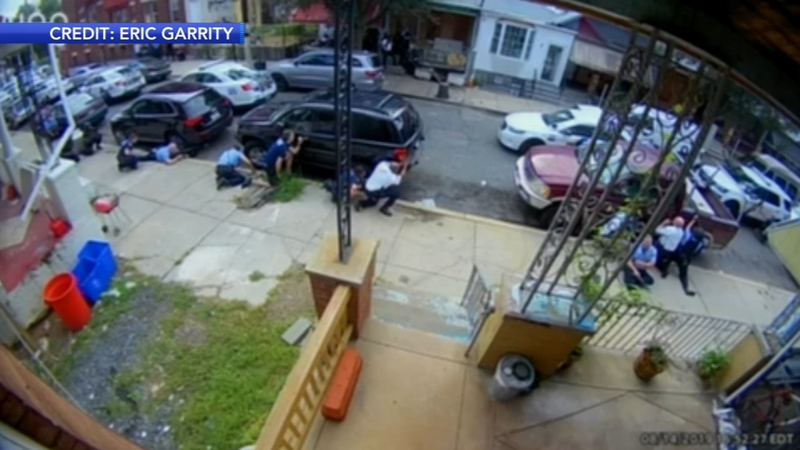 PHILADELPHIA -- The chaotic moments when shots first rang out in a standoff that would subsequently injure nine police officers, six by gunfire, in Philadelphia Wednesday afternoon were captured on a neighbor's surveillance camera.

Eric Garrity lives across the street from the scene of the incident on North 15th Street. Garrity's Ring doorbell camera captured the moments when officers entered the home to serve a warrant around 4:30 p.m.

In the video, gunshots can be heard ringing out in rapid succession as people walking on the street are seen scrambling for cover.

Just about one minute into the video, one officer can be seen tumbling out the front door of the house as another rushes to his side to help him get farther away from the active gunfire.

Later, two officers can be seen helping a third, who appears to be suffering from a gunshot wound, hobble down the street to safety. All this occurring as a throng of officers are positioned behind parked cars with their guns trained on the home.

"The shooter fired multiple rounds. Officers returned fire -- many of whom had to escape through windows and doors to get away from a barrage of bullets," said Philadelphia Police Commissioner Richard Ross.

Two police officers remained trapped inside of the home for several hours.

The gunman surrendered to authorities shortly after midnight Thursday.

He was taken to Temple University for evaluation and was released a few hours later.

All the police officers who were shot have been released from the hospital.

Ross said one officer who was injured in an accident on the way to the scene remains at Einstein Medical Center.