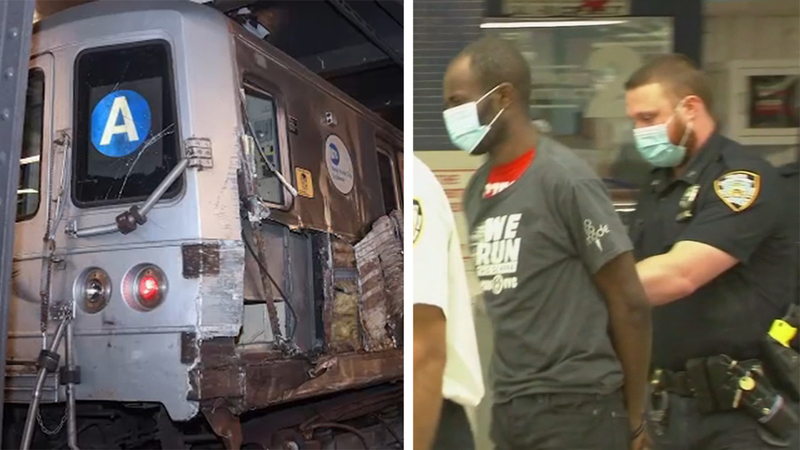 CHELSEA, Manhattan (WABC) -- A man accused of tossing metal debris onto subway tracks and causing a train to derail has pleaded not guilty.

Demetrius Harvard, 30, was arrested and charged with reckless endangerment, criminal mischief, assault and criminal trespass in the September incident.

Harvard was arraigned on a grand jury indictment Friday and pleaded not guilty. He was held for a mental examination.

"We're grateful to the DA's office for recognizing the seriousness of this crime, which only chance prevented from injuring or killing passengers or crew members. The perpetrator who caused this train to derail should face the strictest possible consequences. Additionally, we urge the court to ban him from the transit system should he be convicted."

Police said Harvard was seen throwing construction debris on the express track at the 8th Avenue and 14th Street train station. In the apparent act of sabotage, the front wheels of a train went off the rails as it pulled into the station and struck the tossed metal plate, with the car scraping against columns, damaging them, and shredding the exterior of the train.
EMBED More News Videos

Citizen app video shows a passenger on the subway platform after the train derailment.

The two front wheel sets - four wheels in total -- derailed to the west of the running rails, according to an MTA official.

The MTA says the "heroic" crew was able to stop the train and safely discharge around 135 passengers at the station.

"This was an all-hands on deck emergency with transit workers from multiple divisions responding to assist riders and then begin repairing the extensive damage. It's a stark reminder that the MTA can't cut its front-line workers even if the federal government fails to provide funding in a COVID relief package," Transport Workers Union Local 100 President Tony Utano said.

A fire department spokesperson said three of the riders suffered minor injuries. One person was taken to a hospital for evaluation and the other two declined treatment.

MTA officials discuss the train derailment on a subway track in Manhattan.

Crews worked furiously the rest of that day to restore full service.