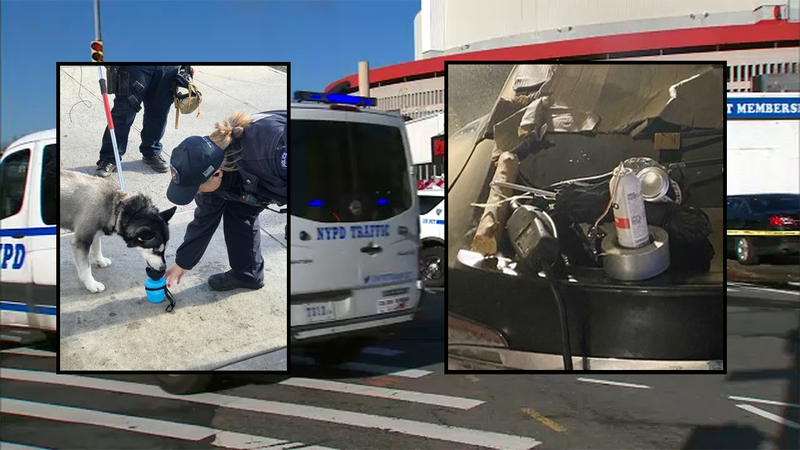 ELMHURST, Queens (WABC) -- The hoax device in a stolen Tesla parked outside Queens Center Mall on Monday is believed to have been the work of a right-wing conspiracy theorist arrested last week for arson, law enforcement sources told ABC News.

Louis Shenker, 22, is being sought after police and firefighters discovered the vehicle that contained wires, cans and a dog.

The suspicious vehicle was first spotted around 8:30 a.m. outside the complex in Elmhurst that contains a Target, a Best Buy, and other businesses, prompting the evacuation of the mall.

"They said they were propane tanks and wires protruding from the vehicle," said John Miller, deputy commissioner of the NYPD intelligence and counterterrorism bureaus. "Police officers from the precinct responded, looked at the vehicle, and immediately began to tape off the area, evacuated the area around it."

A Black Lives Matter sign was attached to the can and police are investigating if Shenker put them there to discredit the movement, sources said.
EMBED More News Videos

Authorities quickly responded to the Queens Place Mall to investigate the package.

"The bomb squad goes into a set of procedures called render safe procedures, where they don protective equipment and assess what appeared to be a possible explosive device," Miller said. "That is a laborious and meticulous process that takes some time, until they were able to clear this vehicle and determine that it was not an explosive device.

The NYPD eventually gave the all-clear sometime after 10 a.m.

Additionally, NYPD officers rescued a husky that was trapped inside the vehicle.

They immediately gave the dog some water, though it is not known how long the dog was left inside.

UPDATE: The suspicious package in the @NYPD110Pct has been deemed a hoax device.

Immediately upon responding to the initial scene, officers from @NYPDCT and @NYPDSpecialops rescued this husky that was trapped inside the vehicle. pic.twitter.com/Ik9Q8ZEo6q

Shenker has been arrested for other provocations, most recently December 30 for igniting a poster tied to an NYPD barricade.