Sydney Carter said she has always dressed up for games as a coach.
ABCNews
By Angeline Jane Bernabe 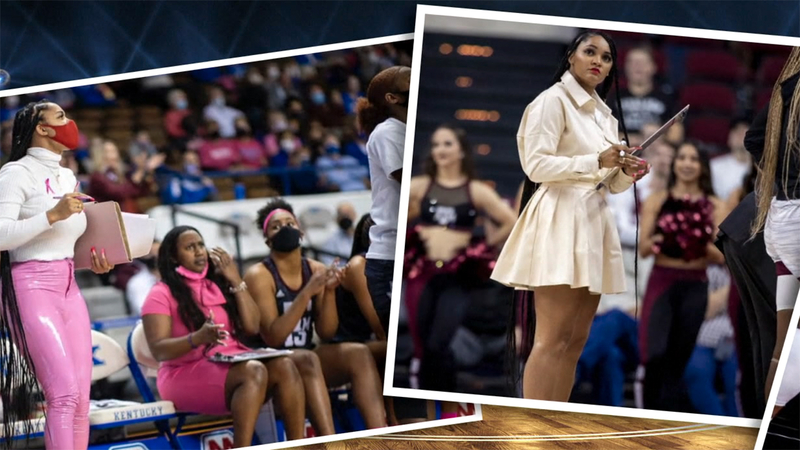 COLLEGE STATION, Texas -- Texas A&M University basketball coach Sydney Carter is fighting back after facing criticism for what she wore on the court.

Last week, Carter made headlines when she was seen wearing a white turtleneck, pink leather pants and stilettos at a game. Her outfit further sparked a debate online about whether it was appropriate.

"I was confused," Carter told ABC News' Deborah Roberts in an interview for "Good Morning America."

"Just because it was something that I had always done," she added. "I wore the pink pants because we were celebrating or honoring breast cancer awareness at our game in Kentucky. I posted my photo and I had no idea that it was going to take off like this, so my reaction was shock."

Carter, who played basketball at Texas A&M University and was drafted by the Chicago Sky in the WNBA in 2012, said she has always dressed up for games as a coach. She's been seen wearing skirts, suits with fun prints and dresses -- all of which she rocks confidently while leading her team.

Game 17. We Back Pat Game pic.twitter.com/AKcJtrVmhx

Carter takes pride in her style, too, posting a photo to Twitter of each outfit that she's worn since the 2021-2022 NCAA Division I women's basketball season began in November.

"I'm still getting my job done at the end of the day, and not once have I been hindered in wearing high heels or leather pants or just if I wanted to wear denim on the bench," she said. "I'm not the first person to wear heels on the bench nor leather pants, and nor will I be the last."

But the comments on social media haven't always been kind, with some calling Carter's outfits unprofessional while others have gone so far as to say that she should be fined for her fashion choices.

"Sometimes it just seems like women can never do enough to satisfy everybody," Carter said, noting that some have even called the criticism against her racist.

"I've never been one to make it about race or anything else," she added. "I just know at the end of the day, I'm a Black woman and I can't hide that. Nor can I hide the fact that I look the way that I look in those pink pants, in particular. So I'm not going to try to do that to make someone else feel comfortable, because it's what I feel comfortable in."

On Twitter, as many have rallied in support of Carter in recent days, including rapper Nicki Minaj, the coach further addressed the topic of how race has played a role in the conversation and put a spotlight on representation.

"Representation matters," Carter tweeted last week. "As a Black woman in coaching, I take pride in showing that people who look like me don't have to diminish our light to appeal to others, whose opinions never mattered anyway. I will continue to unapologetically be myself, apply pressure, and show that Black women can express our individuality while doing our jobs at a high level."

For those who may be in her shoes or experiencing something similar, Carter shared a few pieces of advice.

"I say do what you're confident in. Be who you are regardless of what people say they would prefer to be the norm," she said. "There is no norm anymore. You make it your own."
Report a correction or typo
Related topics:
societytexasncaafashionu.s. & worldbasketballwomen
Copyright © 2022 ABC News Internet Ventures.
TOP STORIES
Possible monkeypox case linked to patient in NYC
Exclusive: Hochul talks gun violence, racism after Buffalo shooting
Exclusive: Friend lends hand after fruit vendor attacked at NYC park
Small town girl's journey from cheerleader to sex-trafficked 'hostage'
NYC to mark Biggie Smalls 50th birthday, MTA unveils special MetroCard
14-year-old ID'd as person of interest in death of Kyahara Tay
AccuWeather: Warm west
Show More
NY high court to determine if Bronx Zoo elephant is a person
Kidnapped CA teen found in NY thanks to quick-thinking detective
Dave Chappelle attacker now charged in December attempted murder case
1 killed, several injured in multi-vehicle crash in New Jersey
911 dispatcher who took Buffalo shooting call put on leave
More TOP STORIES News