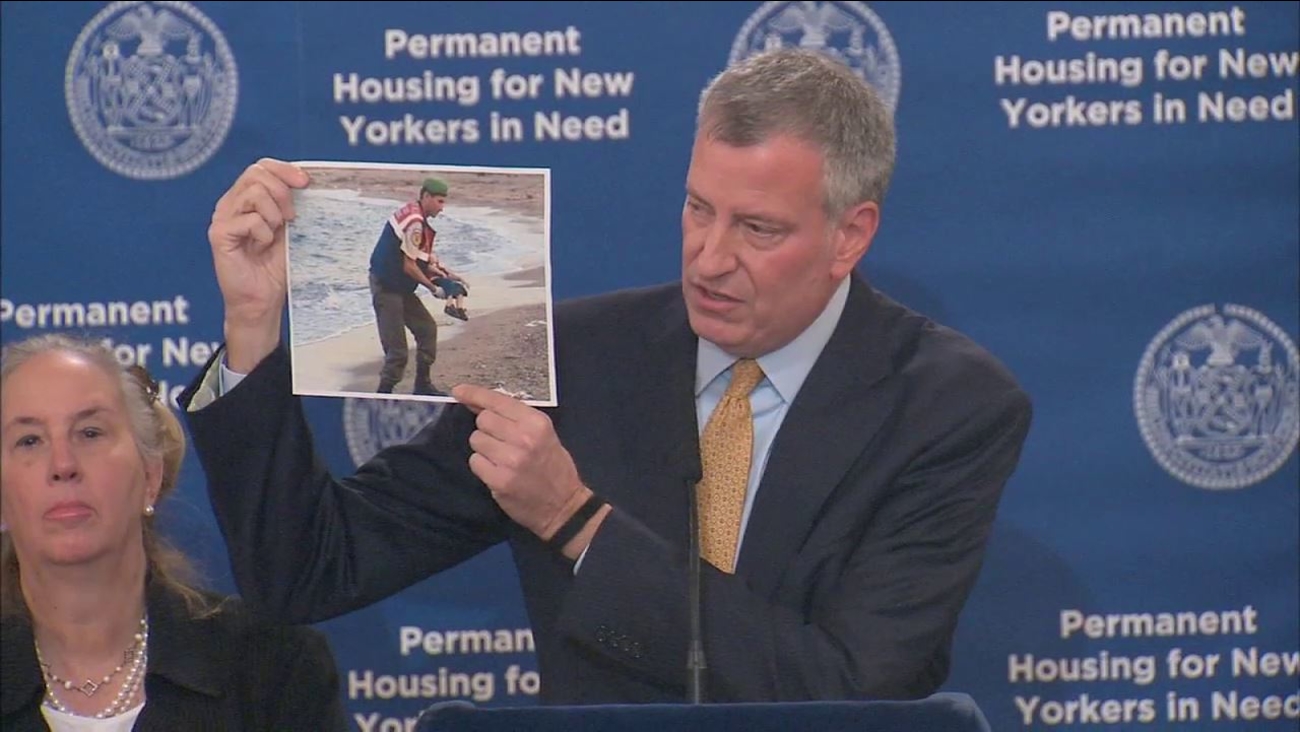 One day after calling Christie "an embarrassment to this country" for ordering state agencies not to help resettle Syrian refugees, de Blasio held up a picture of refugee boy whose body washed up on the beach and pointedly said, "I'd like to know what Gov. Christie thinks about this."

The mayor also said New York City has accepted eight immigrants from the Syrian crisis so far. He said there will be intensive screening before the city accepts anyone.

"The only way this works is very careful screening, very extensive screening," said the mayor. "That is a prerequisite to any refugee coming into New York City. The Secretary of Homeland Security has spoken very bluntly about this multi-layered, slow, deliberative screening. "


Christie, a candidate for the Republican presidential nomination, wrote to President Barack Obama on Tuesday, saying he doesn't believe the background checks on refugees will be sufficient.

But de Blasio continued to blast Christie, voicing what he called his "anger and disgust" at the governor's statements.

"This is a nation of immigrants and we are sitting here in the city that has the Statue of Liberty, that is the epitome of welcome immigrants over generations," said the mayor. "By the way, those immigrants were in many many cases fleeing violence and persecution. This is not a new reality. I'm certain some of those immigrants were Gov. Christie's forebearers. So i find it absolutely hypocritical for anyone to say let us shut our borders to people who are victims of violence, to innocent people who are fleeing humanitarian crisis, that is un-American."

A Christie spokesman responded that de Blasio "was more interested in making headlines than protecting the people."

.@BilldeBlasio wouldn’t expect anything less from a liberal politician who is more interested in making headlines than protecting the people

Several governors have said they won't allow Syrian refugees into their states following the coordinated attacks in Paris. In New York, Republican U.S. Rep. Chris Collins and Republican state lawmakers cited the threat of terrorism when they called on Gov. Andrew Cuomo to reject additional refugees from the war-torn Middle Eastern nation.

But rejecting Syrian refugees would be akin to "conceding defeat of the American dream," Cuomo said Tuesday in a sharply worded response to those urging him to keep the refugees out of the state.

Earlier Wednesday, Christie said the FBI has admitted it does not have the capacity to vet refugees.

"The American people need to be protected first," said Christie. "The homeland needs to be protected first. And this President had an opportunity to protect these people in Syria and he didn't do it. He broke his word to them. Now nearly 250,000 of them are dead and there is no safe place for them to go in Syria."