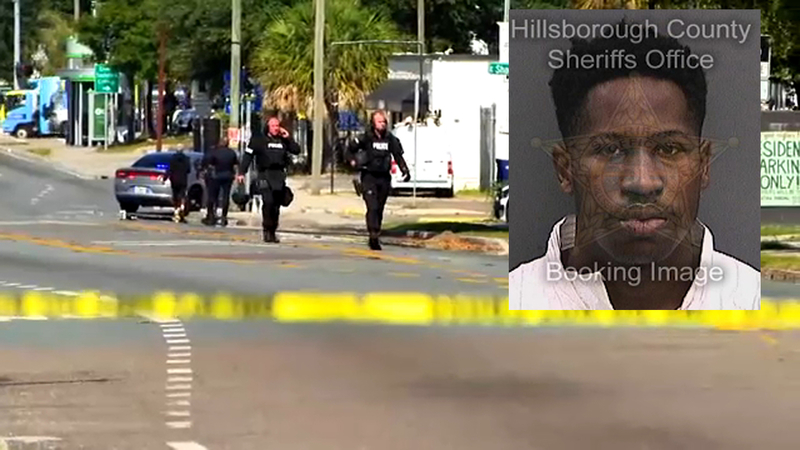 TAMPA, Florida (WABC) -- The suspect in a string of four slayings that terrorized a Tampa neighborhood was arrested after he brought a loaded gun to his job at a McDonald's and asked a co-worker to hold it, authorities said.

McDonald's workers reported the gun to a police officer who was doing paperwork at the fast-food restaurant, setting off an investigation that linked Howell Emanuel Donaldson, 24, to the crimes, in party by using location data from his cellphone, authorities said.

The arrest overnight brought relief Wednesday to a community on edge over an apparent serial killer who targeted three people near bus stops after dusk last month. Police had earlier released black-and-white surveillance video showing a man in a hoodie as a possible suspect, and by Halloween the fear was so great that police escorted children while trick-or-treating.

Tampa Police Chief Brian Dugan announced at a news conference that Donaldson would be charged with four counts of first-degree murder. Police have not released a motive. A news conference was planned for 10 a.m. EST.

The tip that led police to Donaldson came from one of his co-workers at an Ybor City McDonalds, which is near the Seminole Heights neighborhood.

Donaldson asked an employee at the restaurant to hold a bag with a loaded semi-automatic gun while he went to a nearby business to get a payday loan, according to an arrest report.

The employee told her manager about the gun and the manager alerted a Tampa police officer at a table in the restaurant.

When Donaldson returned to the McDonald's, police were waiting.

The arrest report said police found clothing inside Donaldson's car that was similar to what was worn by a person spotted in surveillance video taken the night of the first shooting.

Donaldson told investigators he was unfamiliar with the neighborhood where the shootings occurred. He then asked for an attorney, but arrest records don't list one.

Speaking Wednesday morning on ABC's "Good Morning America," the police chief said authorities still don't have a motive and will be seeking help from the public as they try to learn more about Donaldson. Dugan also said he has spoken with Donaldson.

"He was pretty non-responsive; wasn't angry," Dugan told ABC. "It was a very subdued, strange behavior in my opinion. But whoever does something like this, Lord knows what's driving them."

Residents and police had been on edge since Oct. 9, when 22-year-old Benjamin Mitchell was shot to death. Two days later, 32-year-old Monica Hoffa, was slain. And on Oct. 19, Anthony Naiboa, 20, was killed after taking the wrong bus home from his new job. On Nov. 14, 60-year-old Ronald Felton was killed.

All of the October victims were either getting on or off a city bus, or were at a bus stop when they were shot, police said.

Dugan said the department had received more than 5,000 tips. He thanked those who called in the tip that led to Donaldson's arrest.

Donaldson has ties to the New York City area.

Donaldson, who goes by the nickname "Trai", attended St. John's University, where he played on the basketball team.

A university spokesman said Donaldson attended the university beginning in the fall of 2011 and graduated in January 2017.

He was a walk-on student-athlete for the men's basketball team during the 2011-2012 season but never played in a game.

He also may have briefly worked for the Mets.

Donaldson has one prior arrest in Manhattan dating back to 2014, but the case is sealed.