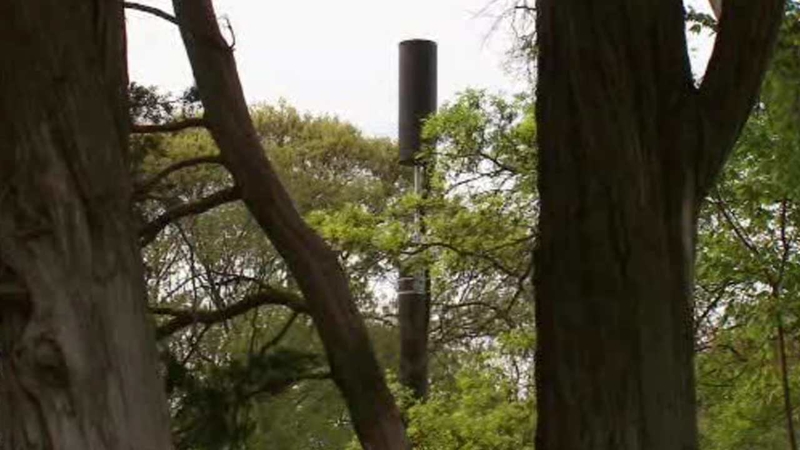 WOODBURY, Long Island (WABC) -- One neighborhood on Long Island is protesting a plan that's building telephone towers near their homes.

They claim the towers cause health problems from radiation.

"They continue to go up. Why?" a protester said.

Woodbury residents are demanding answers as to why dozens of cellphone towers are quietly appearing on their streets. They said they are going up with no explanation and no notice.

"I think we're so concerned about it because they aren't telling us what exactly they are, and they didn't notify us prior to them being installed," resident Karen Ostrick said.

"This is emitting radiation and no one has answers for us," resident Tara Ginsburg said.

Approximately 600 cell nodes have been installed on utility poles across Long Island in the last eight years. Most of the poles were already installed -- only some were put in for the sake of accommodating a cellphone node.

Residents are not compensated, but the towns ordinarily collect a modest permit fee.

"This needs to come down, this is a bus stop. This is too close to residential homes. This should not be in a residential area," Tufano said.

The Texas company that owns the cell equipment, Crown Castle, said it is committed to working with local officials on placement. The company said it partners with municipalities, working with them on locations and relocations -- even though it said relocations rarely happen.

"They don't belong in front of someone's home, aesthetically it's horrible, we want to know what the health effects are," said Joseph Saladino, Oyster Bay Town Supervisor.

Leading authorities said the repeaters are safe. According to the Environmental Protection Agency, "At very high levels, RF energy is dangerous. RF energy decreases quickly over distance. At ground level, exposure to RF from sources like cellphone towers is usually very low."

The company said one of the poles in question, like others installed in recent weeks, has not been activated.

Although the town issued the permits, the supervisor says he is determined to revoke them, and to prevent new poles from being built.

A spokeswoman with Crown Castle provided additional information about how the company said it worked with the Long Island towns on placement:


See Q&A below with Crown Castle about the towers