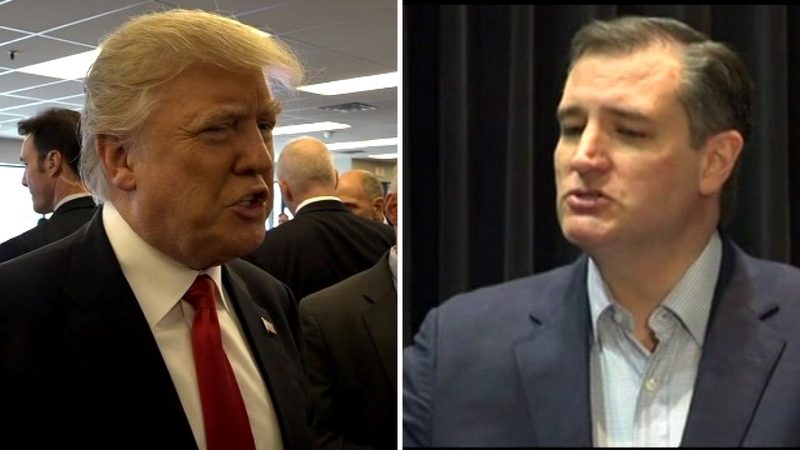 INDIANAPOLIS -- Republican Ted Cruz launched a blistering attack on rival Donald Trump as voters cast ballots in Indiana on Tuesday, calling him "amoral" and likening him to a fictitious character he described as "a braggadocios, arrogant buffoon."

Speaking to reporters in Evansville, Indiana, on the day of the state's presidential primary, Cruz warned that the country can "plunge into the abyss" if Trump is elected president.

"We are not a proud, boastful, self-centered, mean spirited, hateful, bullying nation," Cruz said, with his wife Heidi and running mate Carly Fiorina by his side. "If Indiana does not act, this country could well plunge into the abyss."

Take a look at a portion of the rant here:

Cruz faces a high-stakes test of his presidential campaign in Tuesday's primary, one of the last opportunities for the Texas senator to halt Trump's stunning march toward the GOP nomination.

Cruz has spent the past week camped out in Indiana, securing the support of the state's governor and announcing Fiorina, a retired technology executive, as his running mate. And he's vowed to stay in the race, regardless of the results.

"I am in for the distance, as long as we have a viable path to victory," Cruz told reporters on Monday.

Trump devoted more time to campaigning in Indiana than he has to most other states, underscoring his eagerness to put his Republican rival away and shift his attention toward Democratic front-runner Hillary Clinton.

While Trump cannot clinch the nomination with a big win in Indiana, his path would get easier and he would have more room for error in the campaign's final contests.

"Indiana is very important, because if I win that's the end of it. It would be over," Trump said during a lunch stop Monday in Indianapolis.
Related topics:
politicsted cruzdonald trump
Copyright © 2021 by The Associated Press. All Rights Reserved.
TOP STORIES
Eyewitness News Evening Update
Arrest made in woman's death from fall down subway stairs
State of Emergency issued in NY to help boost hospital capacity
Girl paralyzed in porch swing accident now helping other injured kids
What is omicron? What to know about new COVID variant
Christina Applegate shares message on 50th birthday after MS diagnosis
Man arrested after fatal stabbing in lobby of NYC apartment building
Show More
AccuWeather: Potential snow showers
Islanders games postponed due to COVID cases
UK, Germany, Italy report cases of new omicron variant
Half of NY's $2.4B in rent aid held up 6 months after launch
Holiday shipping deadlines to get packages mailed on time: LIST
More TOP STORIES News