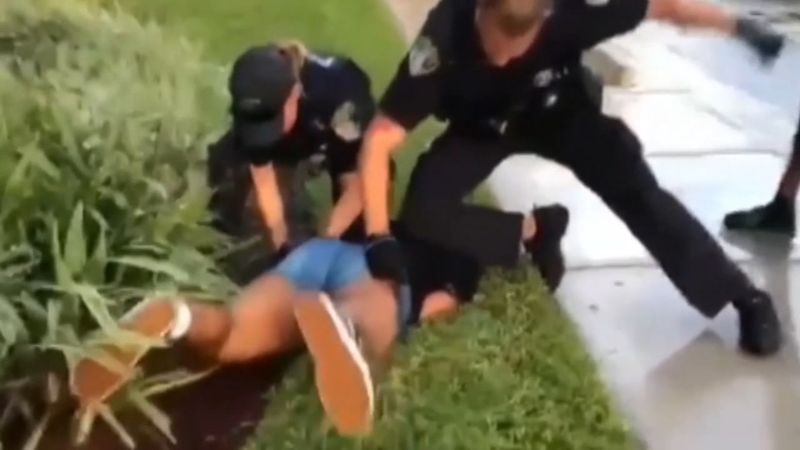 CORAL SPRINGS, Florida -- A 14-year-old girl was acting aggressively and resisting arrest Thursday when she was taken to the ground by Coral Springs police officers and punched by one of them, authorities said on Friday.

The incident was captured on cellphone video.

One patron stopped an officer and said her 5-year-old child had been pushed to the ground by one of the teens, authorities said.

Police said one of the girls in the group was also seen striking another teenager.

Mall security asked police to issue a trespass warning to the teens and bar them from the mall.

The officers did so, but were called a short time later before they left the mall because the teens had returned to the property, authorities said.

According to police, one of the male teens was arrested without incident, at which time the 14-year-old girl began cursing and attempting to incite the other teens.

Police said officers tried to take her into custody, but she began to fight with them and resist arrest.

Officers then took the girl to the ground and tried to get her to release her fists, authorities said.

Police said he was forced to do so because she continued to resist arrest and he was trying to get her to release her clenched fists.

"He went completely overboard," the teen's mother, Jessica Dennis, told WPLG. "Her hands were pinned up. It was just too much."

Dennis said it was hard to watch her child being held down on the ground by two officers and then being hit.

"I was heartbroken and I couldn't see her," Dennis said. "They just seemed nonchalant. They didn't care."

The teen was ultimately taken to the police department and then transported to the Juvenile Assessment Center.

"The Coral Springs Police Department believes in transparency," CSPD said in a statement. "It is important for people to have all the facts before rushing to judgment of an officer's actions when faced with calls for service involving violent suspects -- regardless of their age or gender."