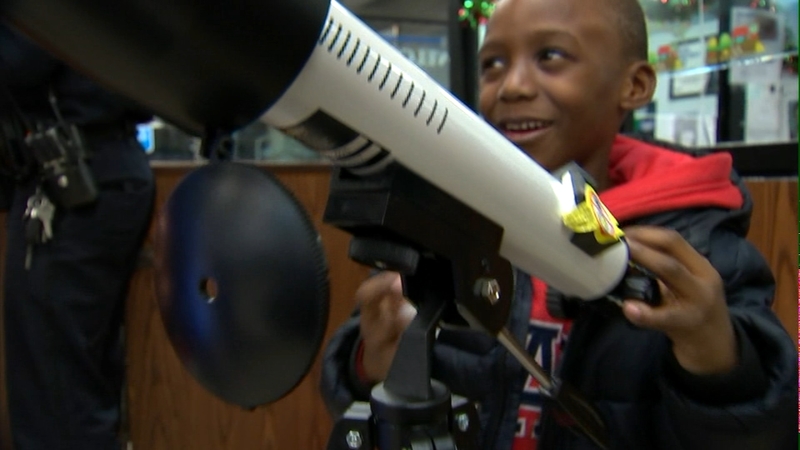 BEDFORD-STUYVESANT, Brooklyn (WABC) -- He's the 5-year-old with a Christmas wish list that instantly melted all of our hearts.

"I'm hoping he could give me a telescope. (A telescope why?) Because I want to look at the stars," Josiah Samuel said.

Josiah was among the thousands of kids in Brooklyn who waited for Santa to arrive Thursday night on the NYPD's Patrol Borough Brooklyn North "Sleigh Ride."

"If they don't give me a telescope it doesn't matter, I could still get a different gift," he said.

But after seeing him on Eyewitness News, the NYPD thought it did matter, and Josiah shouldn't have to settle for a different gift.

"This is insane and I'm so grateful and thankful and happy," said Anais Cutts, Josiah's mother.

"I could see everything with this," Josiah said.

He is also getting a new bike.

He got one Thursday night, but then he gave his to a friend who recently had his bike stolen.

It's giant generosity coming from such a little guy.

"It's just like you give a toy to your friend," he said.

"To give a kid, pick a kid out to give him a bike at 5 years old and then to give it to his friend is almost unheard of," said Charlie Minch, Commanding Officer, 79th Precinct NYPD. "And then we saw him on the news today asking for a telescope. Not many kids would ask for a telescope."

Saturday by the way happens to be his mom's birthday.

It's also when they're moving out of the shelter system.

"Nobody don't understand. We had a tough time. We're moving into our first apartment tomorrow as a family. This is a special, special holiday for me and Josiah," Cutts said.