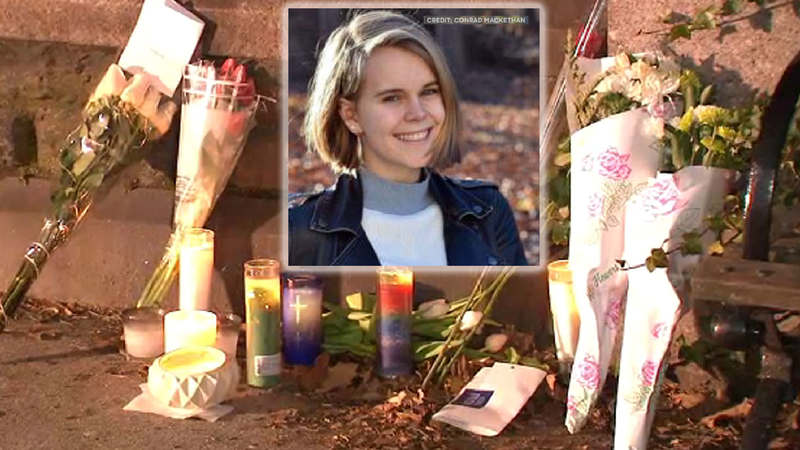 MORNINGSIDE HEIGHTS, Manhattan (WABC) -- The head of an NYPD union is apologizing to the family of the 18-year-old Barnard College freshman who was murdered in Morningside Park after he made comments that she was there to buy drugs.

Sergeants Benevolent Association president Ed Mullins came under immediate fire from the family of Tessa Majors and from Mayor Bill de Blasio after stating on a radio show Sunday that Majors "was in the park to buy marijuana" before linking her death to a larger disagreement he has with the de Blasio administration about marijuana enforcement.

"What I am understanding is that she was in the park to buy marijuana," Mullins told radio host John Catsimatidis on his AM 970 show, "The Cats Roundtable." "Here we have a student murdered by a 13-year-old, we have a common denominator: marijuana...And you think about that. We don't enforce marijuana laws anymore. We're basically hands off on the enforcement of marijuana."

Majors' family blasted Mullins for what they called victim blaming.

"The remarks by Sergeants Benevolent Association president Ed Mullins we find deeply inappropriate, as they intentionally or unintentionally direct blame onto Tess, a young woman, for her own murder," the family said in a statement. "We would ask Mr. Mullins not to engage in such irresponsible public speculation, just as the NYPD asked our family not to comment as it conducts the investigation. Our family is interested in knowing what exactly happened to Tess and who committed her murder. We believe, for the immediate safety of the community and the surrounding schools, that should be everyone's top priority and we are grateful to the men and women of the NYPD for all of their efforts. Our family would like to thank the thousands of strangers who have taken the time to console us, share in our grief, and let us know we are not alone during this terrible time. Tess would not have been surprised by this beautiful reminder of our shared humanity."

Mullins apologized to the family Monday, saying he would never blame their daughter for her death and that his comments on the radio"were taken way out of context."

He said his comments were directed at the mayor, who he blames for an increase in crime in the city.

"This student Tess Majors is clearly a victim of a robbery homicide," he said. "She went to a prestigious school. Her family is suffering. But in many ways, I blame the mayor for trying to slant this in a different direction."

He pointed to instances of crime in Morningside Park.

"There was an 82% increase in crime in that park," he said. "It was robbery patterns in and around that park that nobody knows about. We have students from all over the country being sent here to go to Columbia and Barnard College, and I question, are their parents aware of what is going on in and around the university parks and streets?"

Mullins said upcoming bail reform and decreased enforcement of crimes like marijuana possession are tying the hands of police officers, and he said that leads to more serious crime.

"The hands of the police in this city have been tied by this mayor, and I do not apologize for that," he said. "What I do apologize for is if the family of Tess Majors believes that I intended in any way or made a disparaging comment that their daughter was justified in being murdered, that's totally incorrect and never should they have thought that. The real issue here is we have three people who supposedly were involved in committing a robbery murder who were 14 years old or younger, what we are hearing. That itself is a different issue in the city of New York. And the focus should be on apprehending the criminals and bringing attention to what is really occurring in this mayor's city is we are starting to see a spike in crimes in and around the city, with shootings, stabbings and rapes. This is what's happening. People do not feel safe."

Mullins declined to get into the facts as he understands them of the murder.

"I'd never blame the victim, but I do blame the mayor's policies for what is eroding the city of New York," he said.

Mullins issued a statement Monday night saying he wanted to 'clarify' his comments. It read in part:

Nothing I said was intended to demean Ms. Majors' memory, nor besmirch her character. Ms. Majors is clearly a victim in every sense of the word. Mayor de Blasio and other critics have taken and twisted the words in my interview to redirect the message of my actual comment: that non-enforcement of minor crimes in this City has contributed to an undisclosed rise in the rate of crime in many of the City's neighborhoods, Morningside Park included.
As I thought was clear and obvious, in no way did I intend to suggest on any level that some type of blame toward Tessa Majors was warranted. To the extent that my comments were interpreted that way, then the blame lies with me for failing to articulate my message in a clearer and more empathetic manner. I offer my sincerest apology to the devastated family of Tessa Majors for my lack of clarity.

A 13-year-old boy is currently charged as a juvenile in connection with the case, but he is not believed to be the one who stabbed Majors.