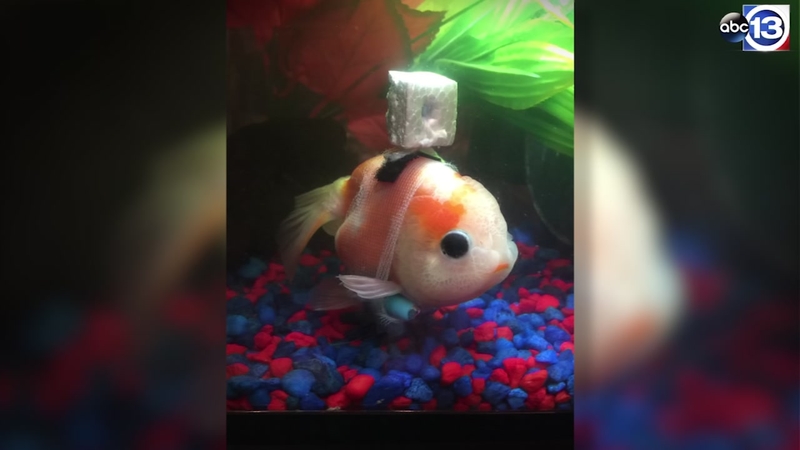 SAN ANTONIO, TX -- You are about get some cuteness overload in this story.

When a customer at a San Antonio aquarium brought in their goldfish with a permanent disorder, an employee thought of a way to give the fish a new lease on its underwater life.

Derek created a tiny, custom wheelchair for the goldfish that suffers from swim bladder disease, also called flipover. The disorder prevents it from controlling buoyancy in water.

Derek's friend, Youtuber Taylor, Dean who is also from San Antonio, creates educational animal videos. He sent her photos of the goldfish using the wheelchair.
"Wasn't able to hold himself up right and was stuck on the bottom. Not anymore! Thought you would get a kick out of it," Derek wrote.

My friend made a wheelchair for a goldfish pic.twitter.com/QghXTY7rme

Derek used airline tubing and placed it around the goldfish. He added valves to the bottom that acted as a chair to prop him up, and he included weights to the bottom and used Styrofoam to keep him afloat.

The internet went crazy after Dean shared the goldfish photos on social media.

@taylorndean this makes my heart so happy

@taylorndean I need a children's book about this fish!!

@taylorndean You. Rock. The end.

@taylorndean Thia is the best thing I've seen in awhile. Thank you! 🐠

Dean shared an update about the fish on March 13 saying that it is doing well with its new set of "fins."

Just wanted to let you guys know wheelchair fish is still doing well and got an even more comfortable wheelchair pic.twitter.com/AwjeJU0pFL