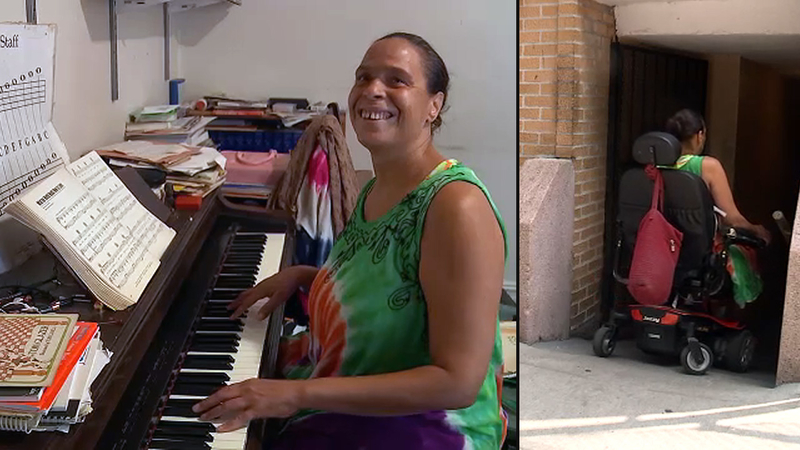 BRONX, New York City (WABC) -- A woman in the Bronx who relies on a scooter says she feels like a prisoner in her own home because the building's only wheelchair ramp is not accessible overnight.

The main entry to 3750 Bronx Boulevard has stairs that require Thais Hockaday to take a ramp to the basement to access the only elevator and her fifth-floor apartment, but the building superintendent has been locking access to the basement from 9 p.m. to 7 a.m., leaving Hockaday with no way in or out of the building.

"It's not fair," Hockaday said. "I feel like a prisoner."

Hockaday reached out to 7 On Your Side Investigates for help after complaining repeatedly to building management and the non-profit agency that helped place her in the apartment.

She receives assistance from an organization known as Comunilife, which helps adults with mental illness live independently.

In a statement to Eyewitness News, the building superintendent said Comunilife should not have placed Hockaday in the building and added that access to the basement is locked overnight for "safety reasons."

Inspectors with the New York City Department of Buildings evaluated the complex at the request of Eyewitness News and issued the building an elevator violation for upkeep issues.

A spokesperson with the DOB also explained that upon examination, the apartment complex was not initially built for tenants to regularly access the ramp or the basement.

Eyewitness News reached out to the Commission, and a spokesperson confirmed the City's Human Rights Law guarantees everyone "a right to equal, accessible, and independent access in housing."

"If a tenant's only accessible entrance and exit in a building is through a basement and the basement is not accessible 24 hours a day, it would constitute a violation of the City's Human Rights Law," the Commission spokesperson said in a statement.

The Commission has opened a case against the building on behalf of Hockaday but could not comment directly about the status of her case.

Attorneys for the building owner did not return Eyewitness News' calls for comment, but in a response to a complaint from the New York City Commission on Human Rights, attorneys for the owner admitted that access to the basement is blocked overnight but denied the behavior amounts to discrimination.

In the meantime, Hockaday said she has been relying on help from Comunilife to find an alternative place to stay without success.

Eyewitness News reached out to Comunilife about why Hockaday had not been moved to accessible housing, and the organization responded in a statement:

"Comunilife is proud of its mission to provide safe, affordable housing and support services to many of New York's neediest residents. We have been working diligently to find appropriate housing for this tenant. In the process, Comunilife has offered her six different apartments that comply with the size, accessibility and other factors that she needs, yet she has rejected every property. Still, we are presenting her with a 7th apartment option this week. We have contacted building management regarding the allegations of limited elevator access and will correct any situation that does not meet our high standards for serving client needs."

Hockaday said she rejected the alternative properties proposed by Comunilife because those buildings also had accessibility issues similar to her current building.

Hockaday said she is continuing to fight for fair access to her home and is also continuing to look for alternative affordable housing.