A walk through the Macy's Thanksgiving Day Parade balloon inflation 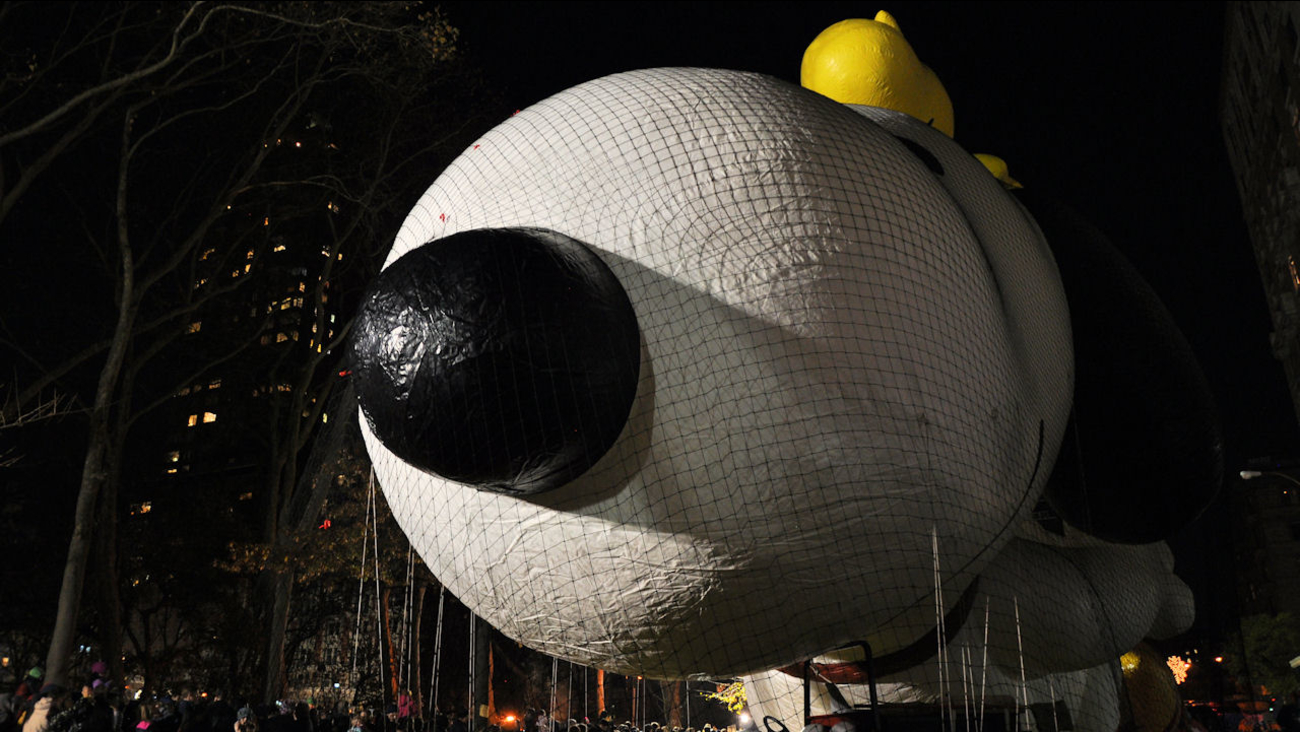 Thousands of people crowded the streets to witness how these balloons get off the ground. (Stevie Borrello)

UPPER WEST SIDE (WABC) -- The 89th annual Macy's Thanksgiving Day Parade starts tomorrow morning, but one of the major highlights of the event happens the night before. Some people are lucky enough to live in the city, or are able to trek to New York, to witness the inflation of the iconic balloons that soar through the skyline during the parade. The streets surrounding the Museum of Natural History were packed with thousands of people coming to witness the balloons up close, and to see the hundreds of volunteers it takes to make the magic happen and bring these deflated balloons to life.

This year has 24 balloons featured in the parade with a few new ones, including a new design of Ronald McDonald, the red Angry Bird, Scrat and his acorn from "Ice Age" and DINO by Sinclair Oil - a comeback balloon from over 40 years ago - which is actually the only life-sized balloon in the parade. The balloons line the streets all night, hidden under rope nets until the morning when they are set to take to the air. 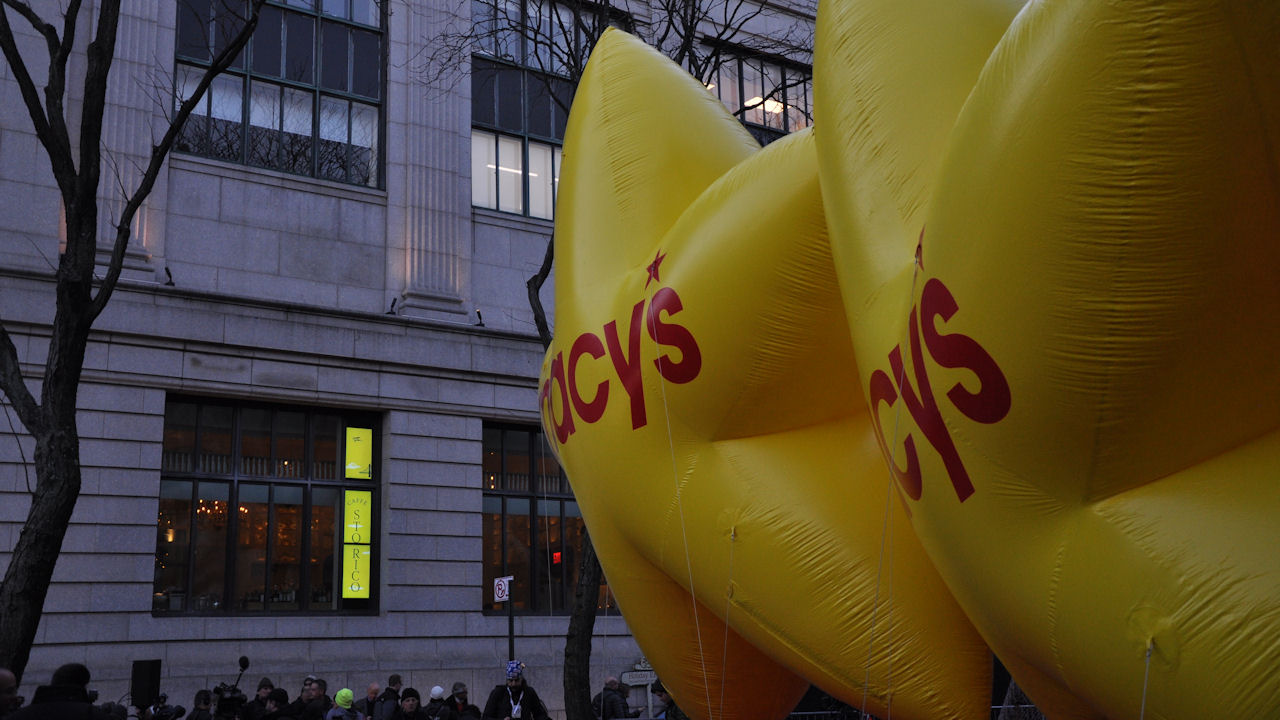 The iconic Macy's star balloons signal the start of the parade. 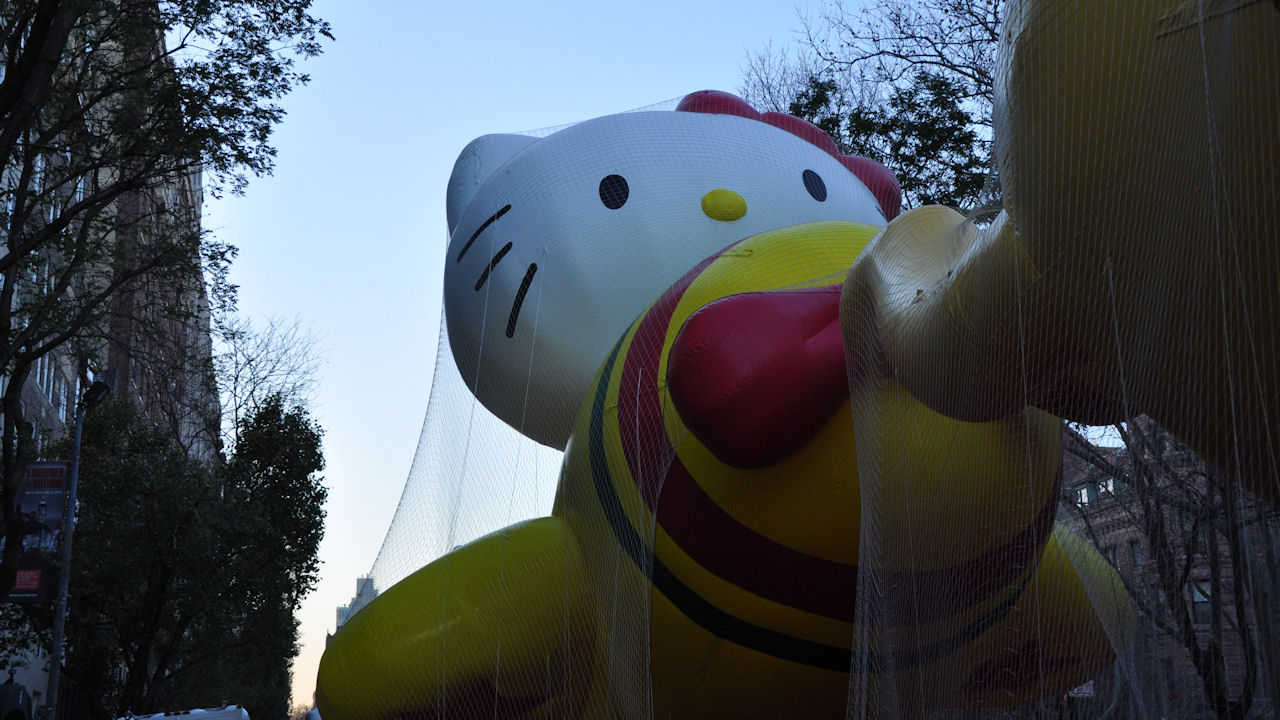 Hello Kitty returns again this year as a popular favorite. 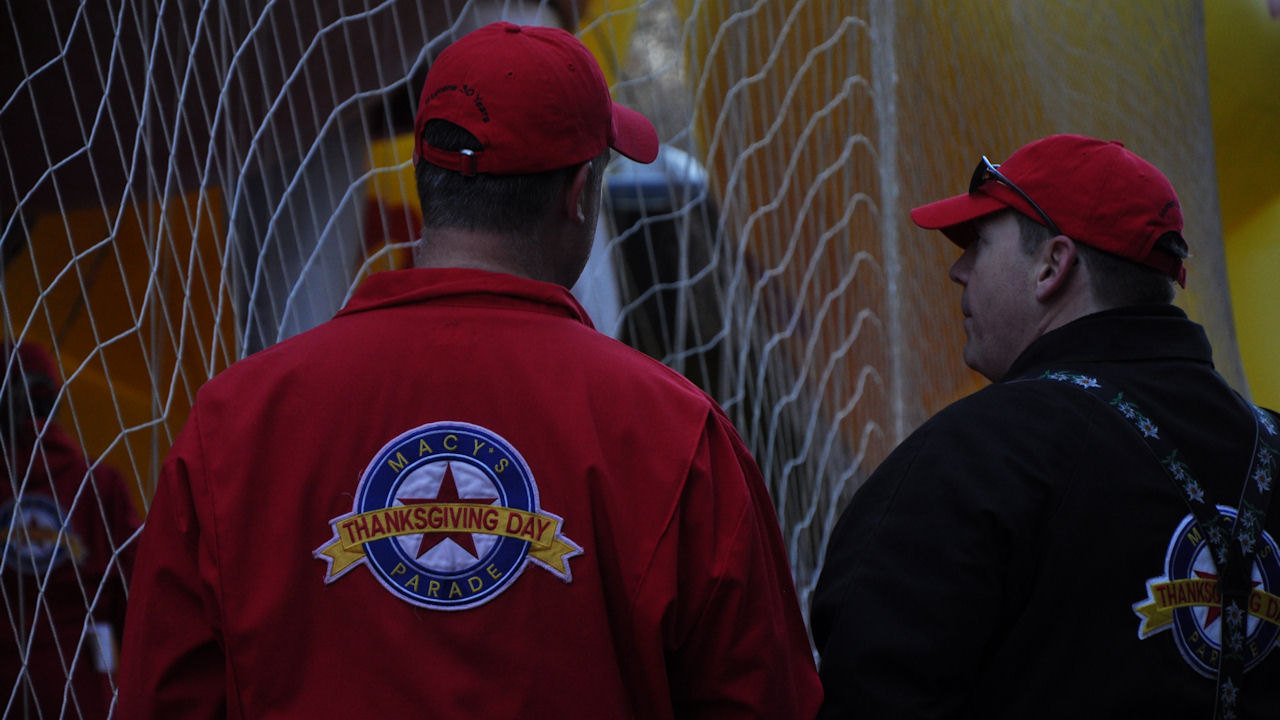 Each balloon has a team of approximately 20 people to help inflate and control the balloon the day of the parade. 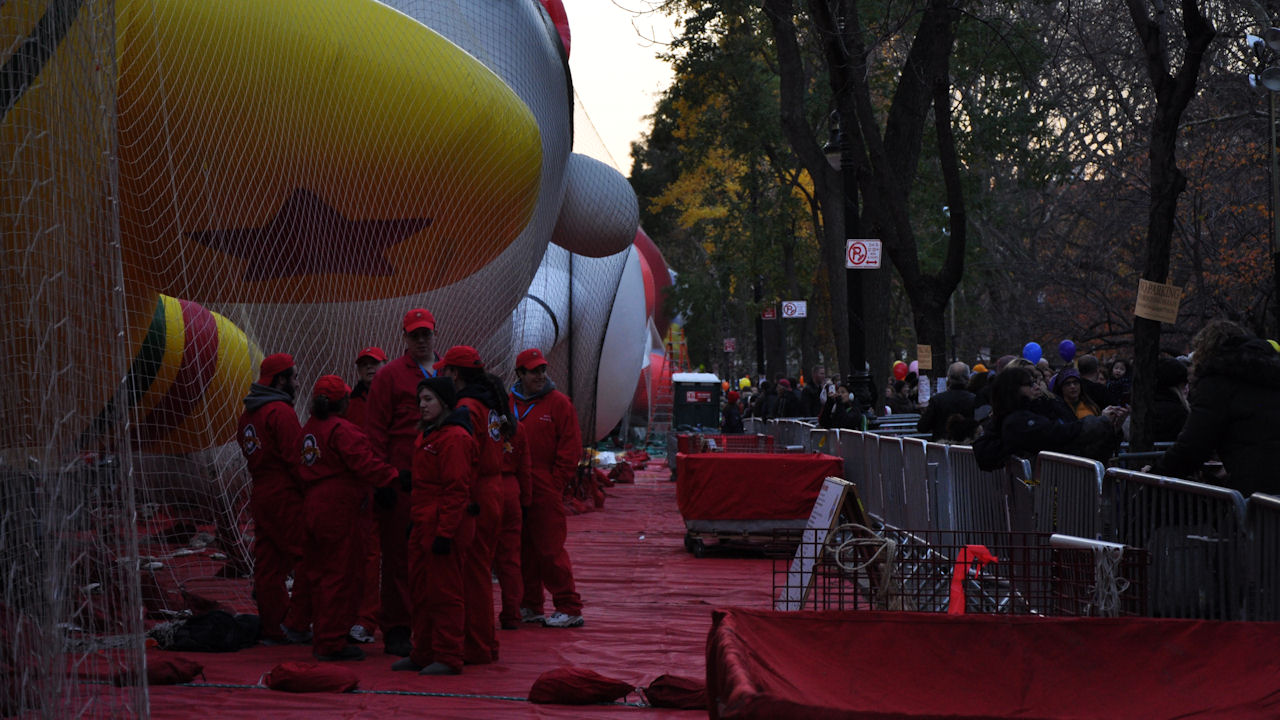 The balloon flight management team consists of one pilot, two co-pilots, one captain, two assistant captains and a team of people that control the movements of the balloon. 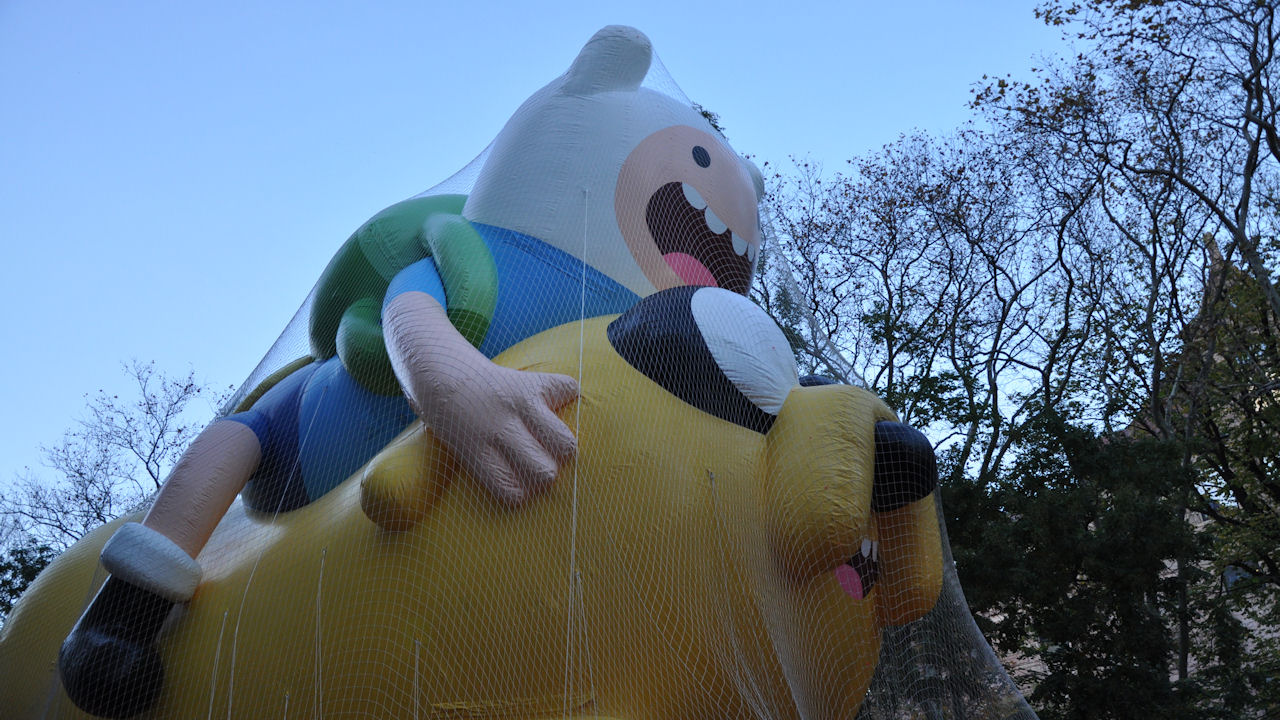 The Adventure Time balloon made its debut in 2013. 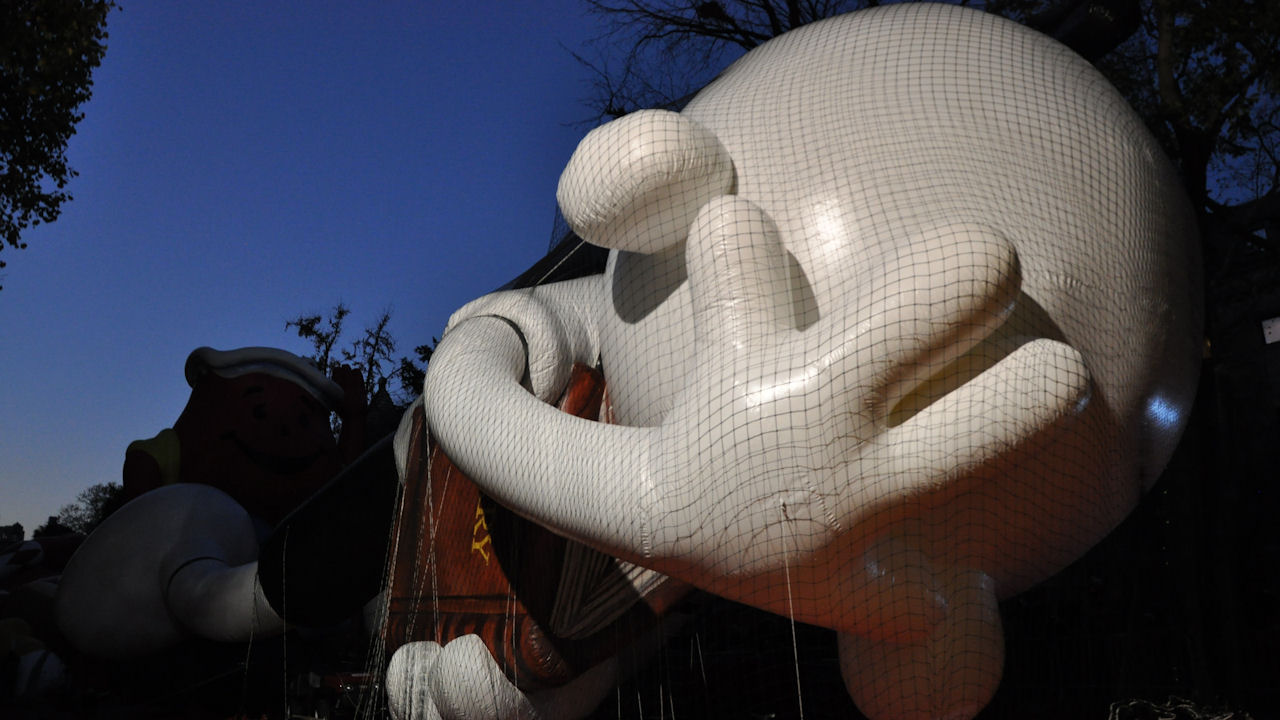 Greg Heffley, the character from Diary of a Wimpy Kid, also makes a comeback. 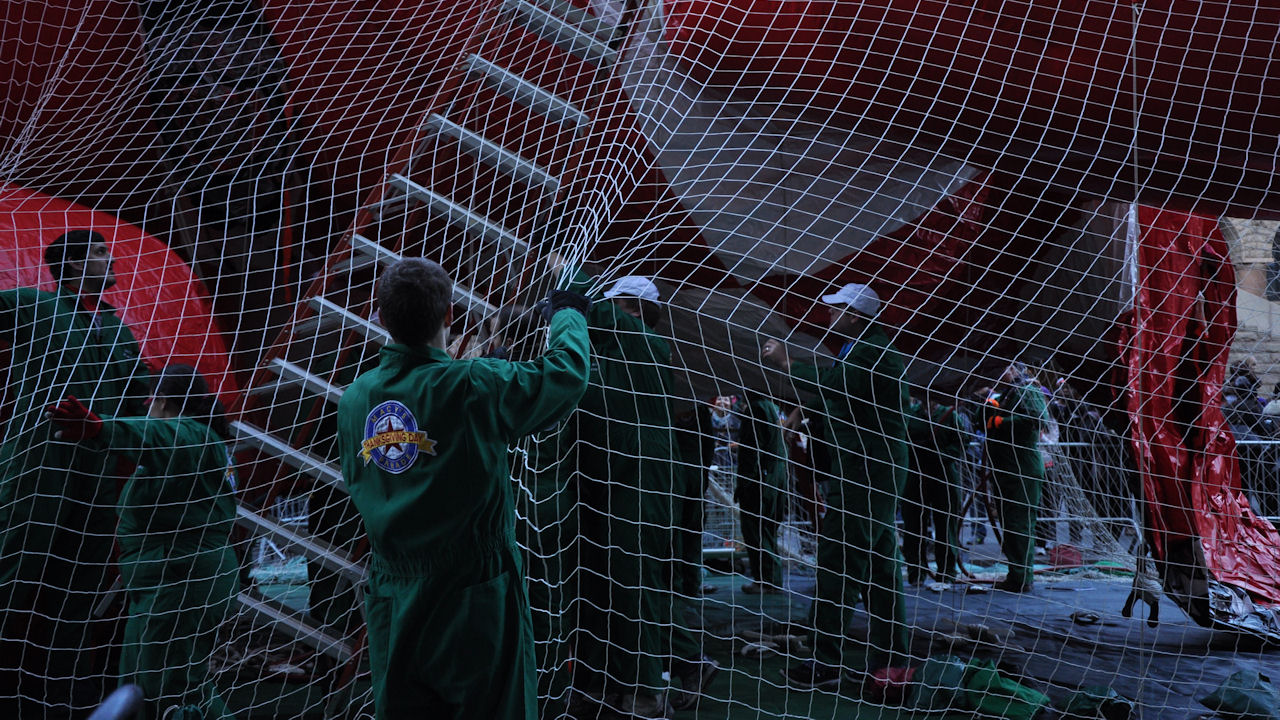 The balloons stay under the nets to prevent them from flying away. 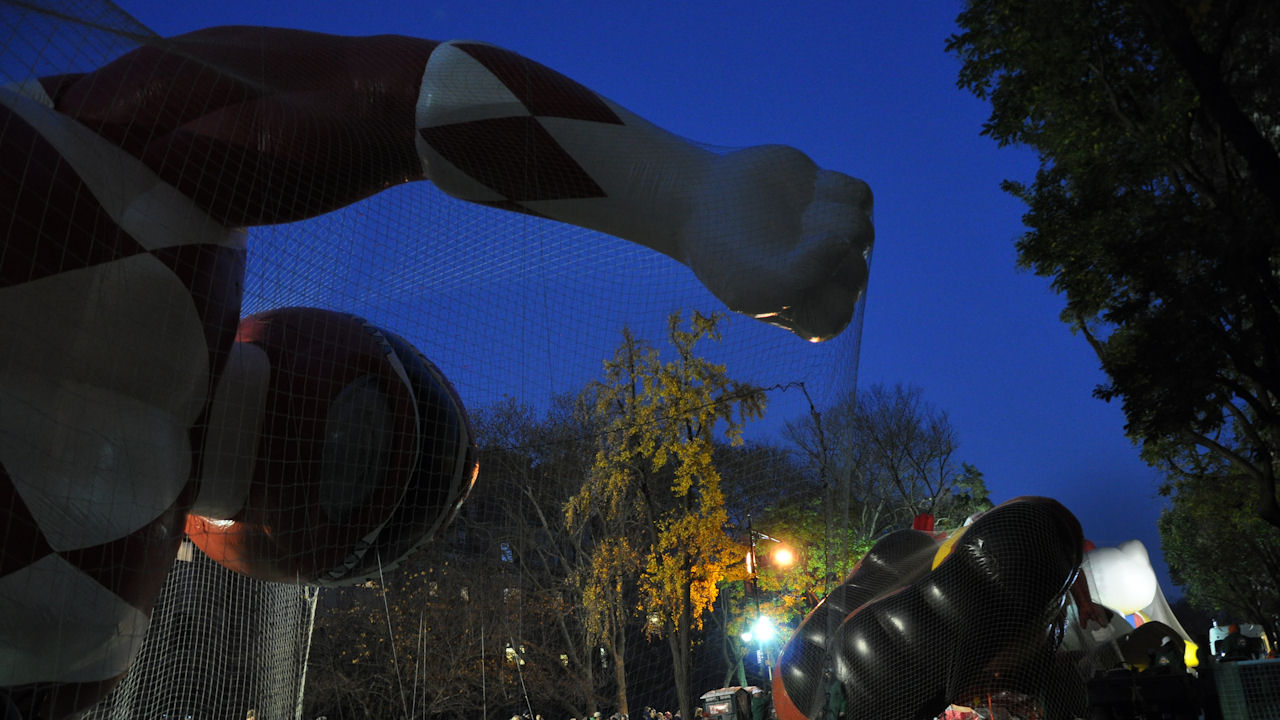 The Power Ranger balloon is ready to take off into flight. 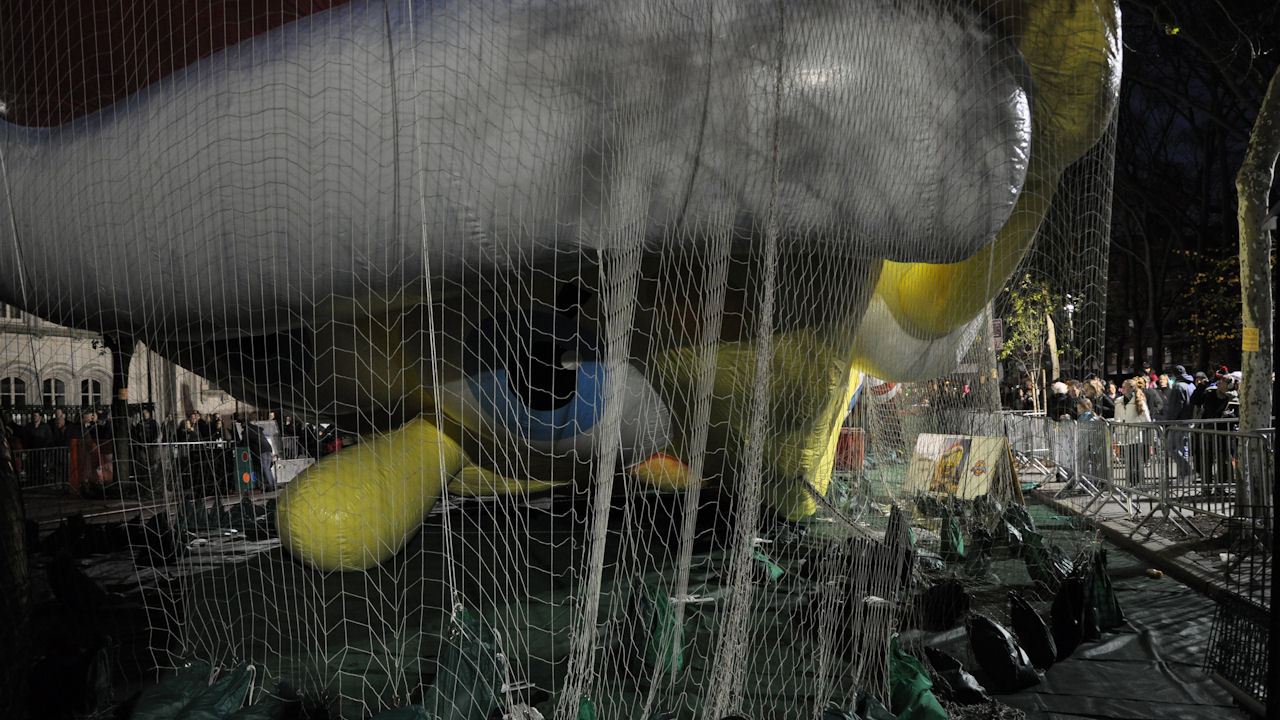 The Christmas-themed Spongebob Squarepants balloon has become a standard for the parade. 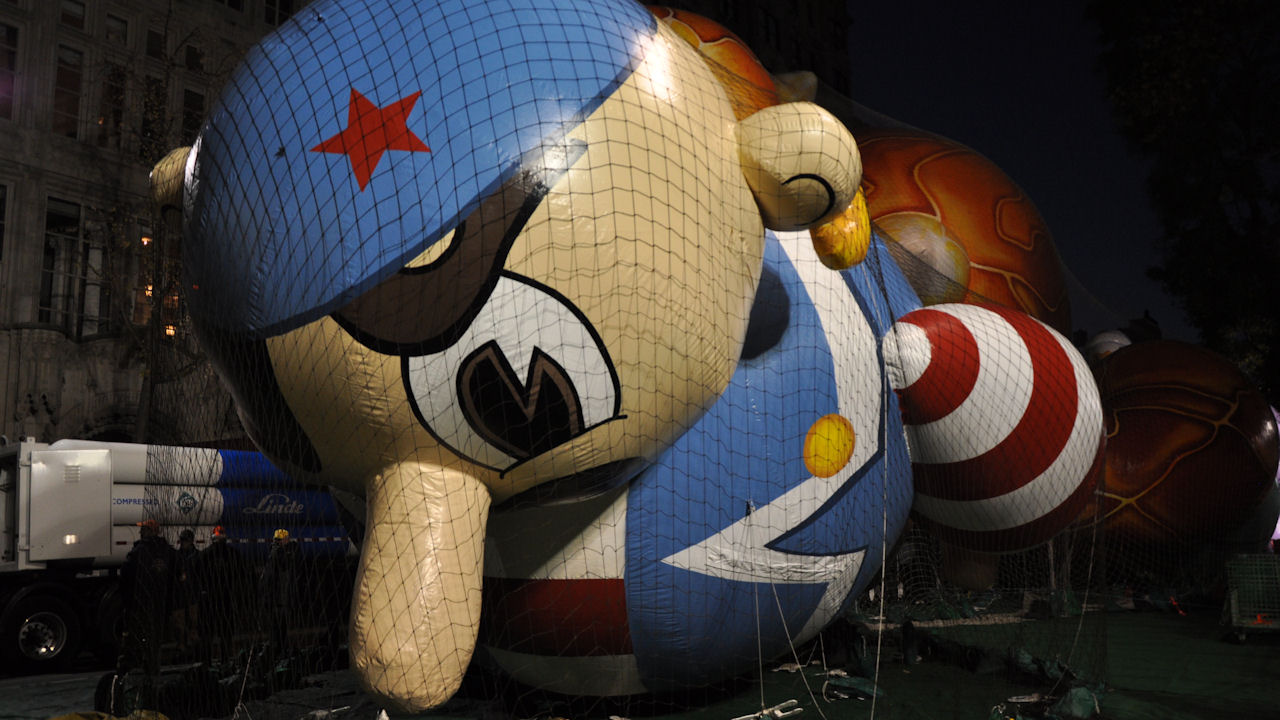 Artie the Pirate has been around since 1947. 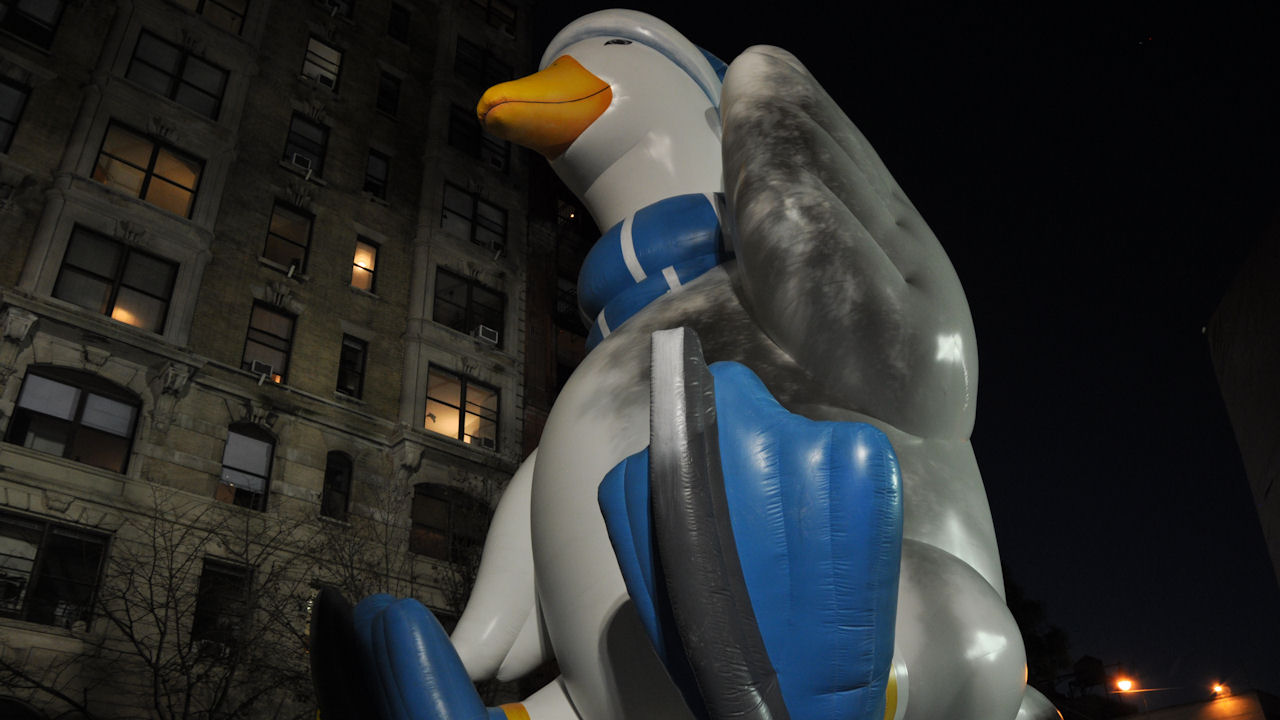 The Aflac duck has now been in the parade for a few years. 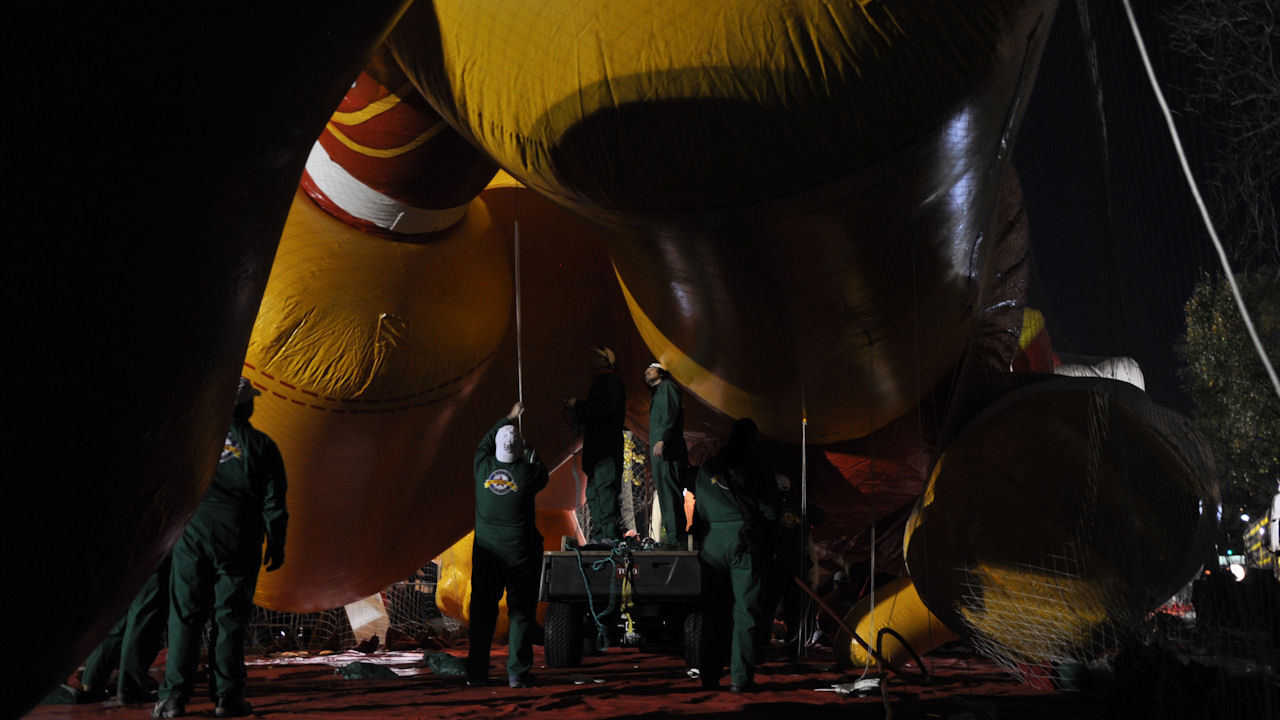 Those who witness the balloon inflation understand the amount of time and effort that goes into getting a single balloon off the ground. 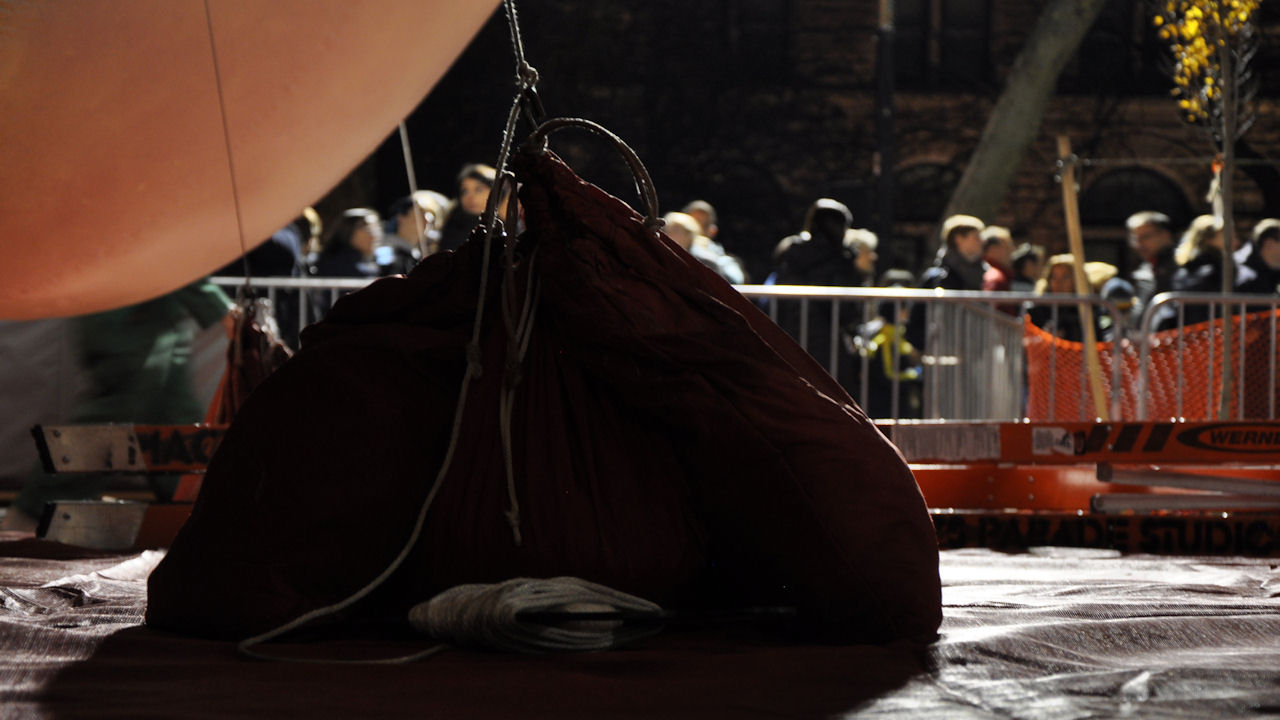 Hundreds of sand bags lined the streets to keep the balloons from flying off. 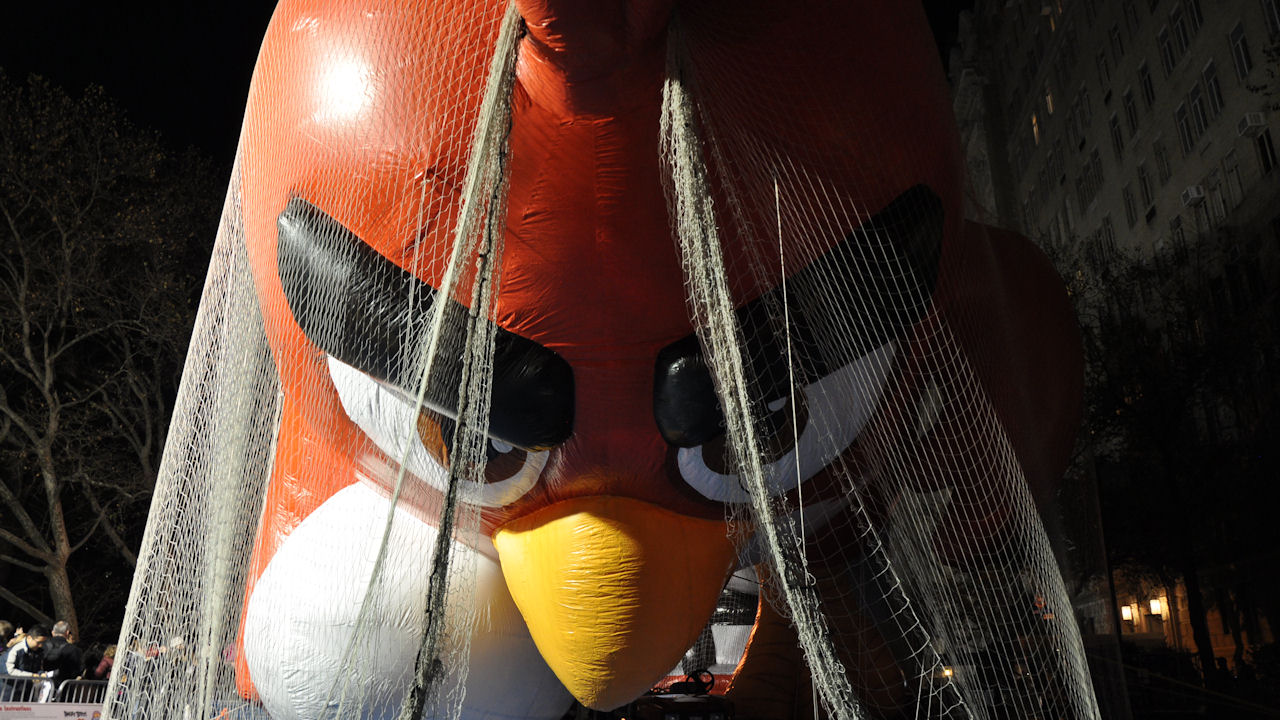 The red Angry Bird is one of four new balloons in this year's parade. 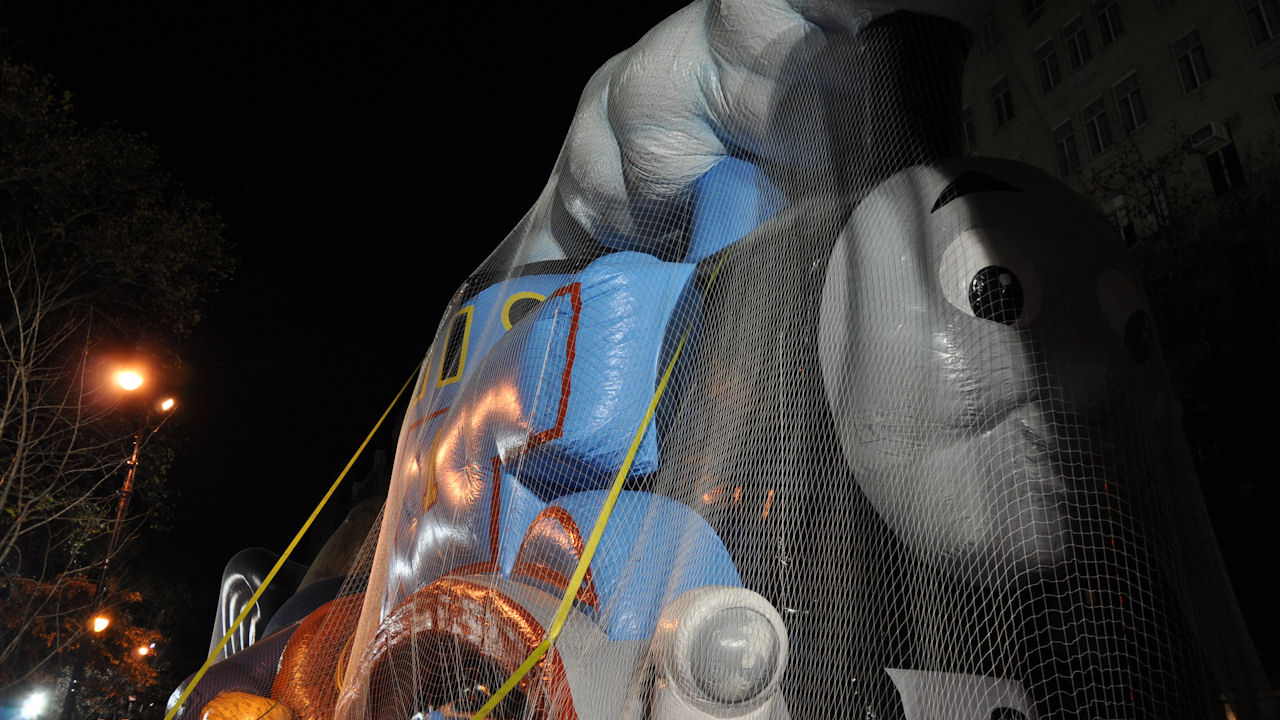 Thomas the Tank Engine is back for its second year. 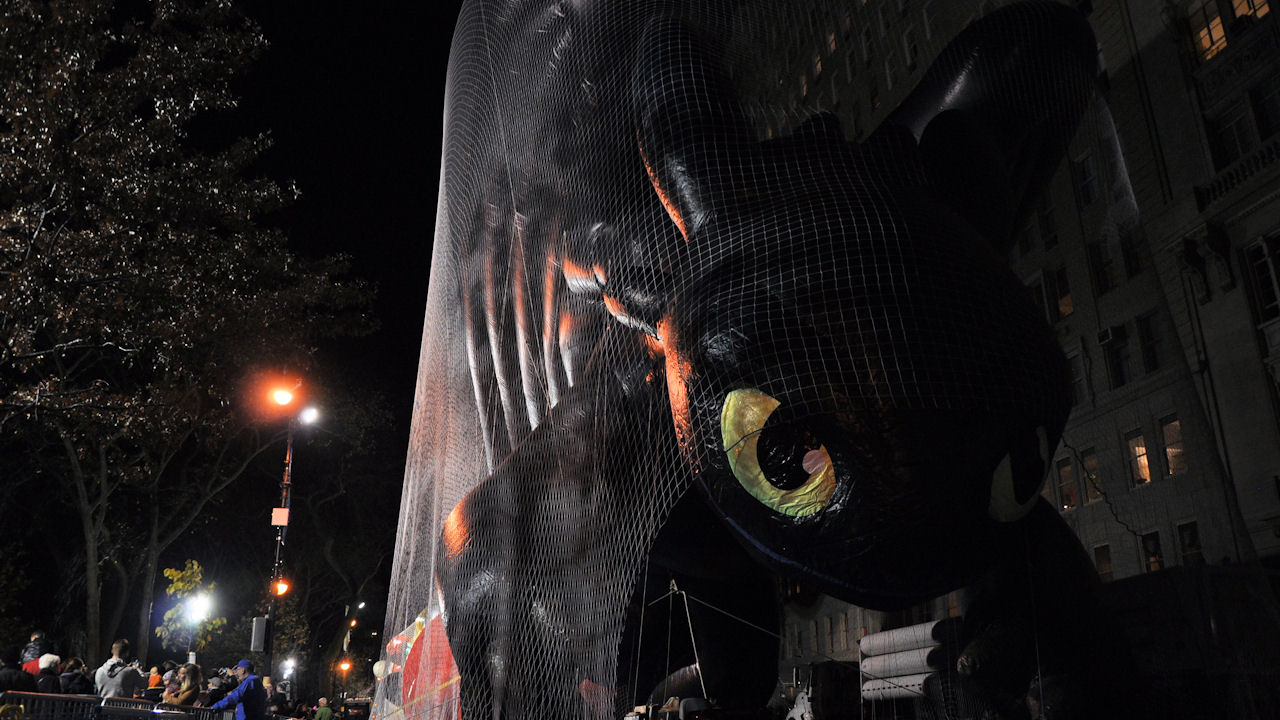 Toothless, from "How to Train Your Dragon," also debuted in 2013.

Pikachu, from Pokemon, has been featured in the parade for over a decade.

Snoopy and Woodstock have become a classic that is a favorite of many who attended the balloon inflation. The Christmas elves signal the end of the parade is near and Santa Claus is coming. 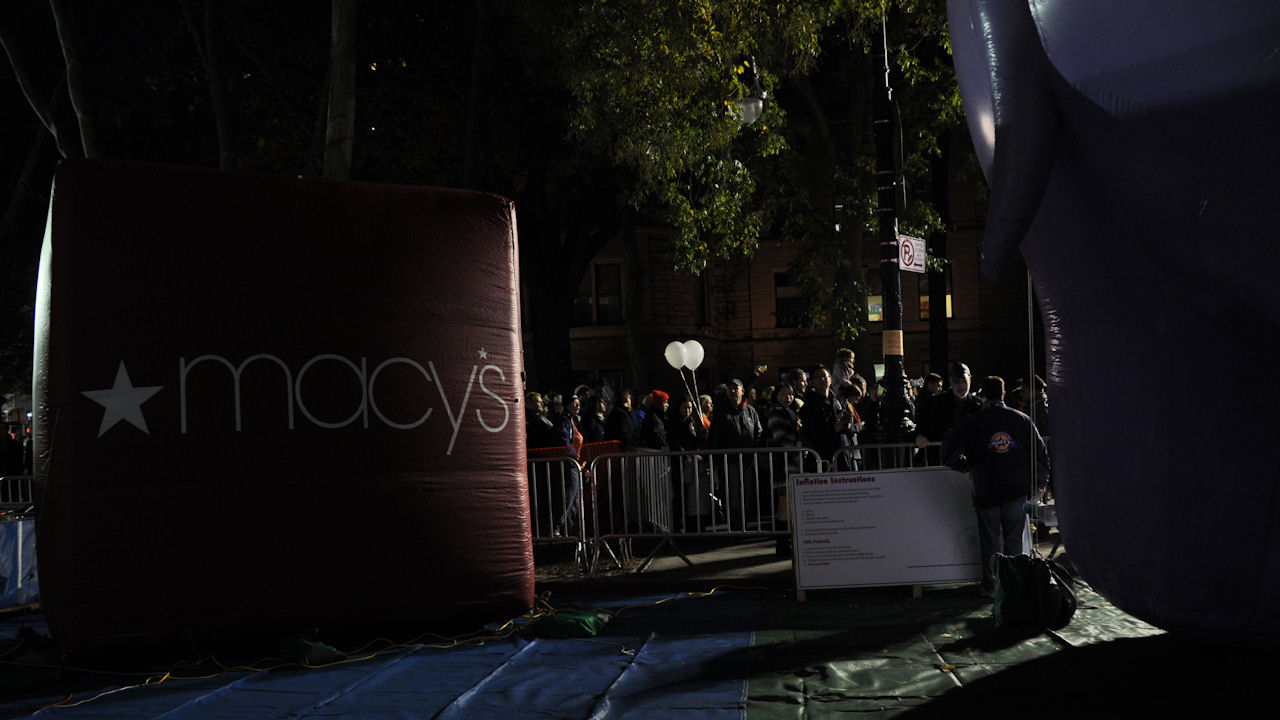 Volunteers will be up early tomorrow to get ready to set these balloons into the air.