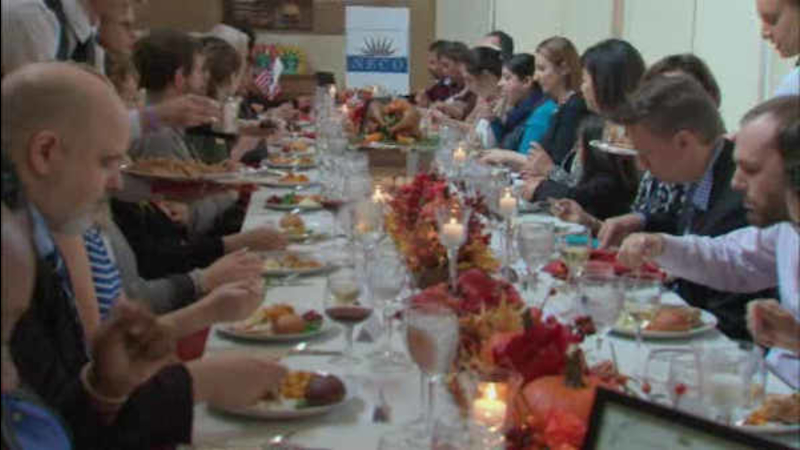 ELLIS ISLANLD (WABC) -- At a time when many Americans are trying to restrict people from immigrating or seeking refuge here, there was a celebration of immigrants Thursday.

New Americans were honored at Ellis Island, the portal where 12 million people once entered the United States.

At one point 40% of Americans could trace their families through Ellis Island.

Thanksgiving dinner was served there on this Thursday in November.

"It was incredible for it to be the first time and for it to have been so special, to have had a Thanksgiving dinner, I mean it's been really amazing," said Colombian immigrant Oriana Sanchez.

A table was set for immigrants more than 100 years ago, waiting to become U.S. citizens. Those feasting Thursday just became citizens.

"It's definitely clear now to see those parallels, of how people want to come here now just as they wanted to come here then," said Sanchez.

"To be able to be on these hallowed grounds to celebrate such an amazing holiday with these new citizens, I get to celebrate Thanksgiving through their eyes," said Kate Monte, executive director of the National Ethnic Coalition of Organizations, which hosted the early Thanksgiving feast for the first time.

"I'm really honored to have this amazing feast when I walked in and they prepared this beautiful table," said Serbian immigrant Danijela Skopljak.

And for some of these immigrants this Thanksgiving dinner takes on a whole new meaning. Especially with the debate about Syrian refugees coming to the U.S.

Like the Syrian refugees, Danijela Skopljak ran away from war, from Bosnia to Serbia, then to the U.S.

"When I see those people I definitely feel the pain, because I've been through that, I did it twice," she said.

For these immigrants who boarded the ferry, gazed at the Statue of Liberty and set foot on Ellis Island for the first time ever, one chance to be an American is all anyone who seeks it really needs.

"I believe that they should have the same opportunity that I did," said Leonardo, a Cuban immigrant.