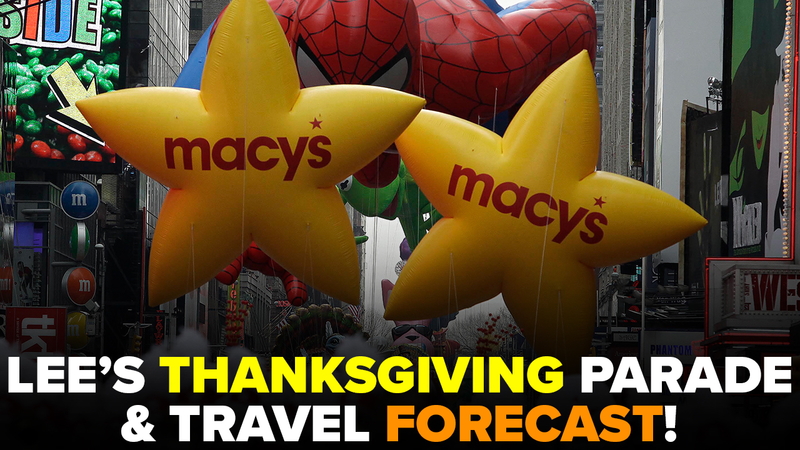 NEW YORK (WABC) -- Whether you're traveling, hosting family and friends or just want to know parade conditions, "Weather or Not with Lee Goldberg" has everything you need to know.

Now here's the good news headed toward Thanksgiving. The overall weather map is fairly quiet. Still, there are some wind alerts over the Plains and into the Rockies and fire weather warnings south of there. And chilly air has gotten into the Southeast, complete with freeze alerts.

The New York region has some of our own very chilly air and there are some Lake Effect snows so that can impact some of your travel as you head across I-90 or maybe I-88. Parts of northern New England might run into some snow showers, but generally, it's a fairly tranquil weather map leading into Thanksgiving after some possible travel delays Tuesday morning related to freezing as temperatures tumble.

We are loving the way the weather map looks on Wednesday around New York, with just high pressure in control. The wind is backing down, with really beautiful travel conditions along the East Coast. Then on Thanksgiving, we're just in a sweet spot- call it stuffed between storms - with a system off to our west and a system that we have to watch very closely doing a lap out in the Atlantic Southeast of Nova Scotia.

We were concerned about that storm last week because of its potential for winds, but it looks like it's far enough away, even though we'll still have a northwest wind of about seven with gusts to 14 and maybe as high as 15 to 20 miles an hour. The only downside is variable cloud cover, because we'll be between storm sytems, but it will be a dry Thanksgiving and the mildest day of the week, with highs in the 50s, a little above average.

Now Friday, we start to get a little concerned on the backside for the holiday travel because we'll have a little rain in the morning. That's not a big deal. But it's very similar to what we had during the day on Monday, when we had that morning rain, with winds kicking in and dropping temperatures.

So as we go through the evening hours on Friday, falling temperatures probably could come along with some snow showers upstate to the north and west. It looks like it remains rather blustery as we go into the first part of the upcoming weekend.

How does the rest of the weekend look, and how are things shaping up for the Macy's Thankgiving Day Parade itself? Make sure you watch Lee's complete video!

You can watch the episode here, but if you want to enjoy a better experience, did you know you can catch "Weather or Not" on your television set? Just make sure you add the ABC7NY app to your streaming device (Roku, Apple TV, etc.) to check out this and other episodes of "Weather or Not."
Report a correction or typo
Related topics:
weatherwindcoldtravelthanksgivingsnowweatherstormmacy's thanksgiving day paradeforecastweather or not
Copyright © 2021 WABC-TV. All Rights Reserved.
Weather or Not: Lee's Thanksgiving travel and parade forecast
Weather or Not: How to see next meteor shower, full moon, more
Here is what climate change is doing to our apple farms
Weather or Not: How you can fight climate change
TOP STORIES
State of Emergency issued in NY to help boost hospital capacity
Broadway legend Stephen Sondheim dies at 91
Man fatally stabbed in lobby of Brooklyn apartment building
Second NYPD officer shot by suspect released from hospital
New omicron variant stokes world fears, triggers travel bans
Stocks fall sharply on new COVID variant; Dow has worst day of year
AccuWeather: Freezing winds and potential flurries
Show More
Massive fire causes home to collapse in New Jersey
Black Friday shoppers take advantage of deals across Tri-State
Family's beloved dog stolen from Long Island home
Photos released in fatal stabbing of 36 year old near Penn Station
Deodorant recalled due to cancer-causing chemical
More TOP STORIES News