Clayton eliminates woman he says was 'fake crying' on 'The Bachelor' 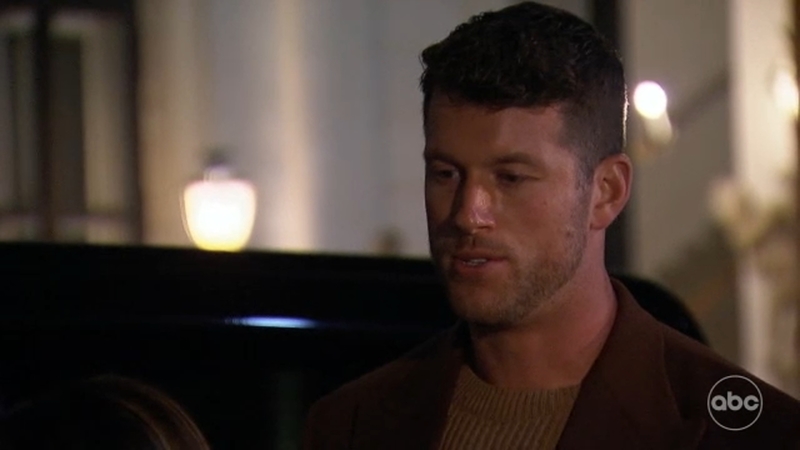 NEW YORK -- The women's jealousy grew this week on "The Bachelor" as some women were getting second dates while others had yet to receive a first one-on-one date. Sarah came back from her second one-on-one date clutching her rose to the ire of the group. She says she's ready for marriage and also ready to take on the liars who tried to get Clayton to eliminate her. Sarah immediately addressed the group of women and told them it wasn't anyone's place to say that she's not ready to be engaged and too young. Mara sat there quietly, rolling her eyes for a while, and then admitted that she did talk to Clayton about not being happy that she hadn't had a one-on-one date yet. Then, Sarah said that Clayton said to her on their date that the comments made about her seemed like a last-ditch effort by someone who was worried about going home.

Clayton walked in and thanked the women for letting him "grow" with him. He pulled Serene first to chat with her. He said that he really valued the deep conversation they had about the loss of her cousin. Clayton brought some mason jars with lights in them to symbolize fireflies to signify the light of her cousin's life. Serene was so touched and it reminded her of the memory she shared with him of she and her cousin chasing fireflies as kids.

Susie laughed and giggled as she told Clayton how much she likes him and used the rest of the time to kiss him. Clayton said he appreciates how "all in" she is. Teddi said that she wants to grow their connection more so that he can come meet her family. Rachel seemed to have a nice talk with Clayton, but they didn't know much of it.

Meantime, Mara decided to pull Sarah aside and the other women were like, "bleep!" They knew this could cause a huge mess for them. Mara said she didn't appreciate the "last-ditch" effort comment from the day before. She also accused Mara to call her and the other girls the "in-between" relationships. Then Mara told Sarah she was too "overly confident" and she should step back to being quiet and sweet. Sarah held it together and said she is just being herself. However, Gabby and Eliza never got to talk to Clayton and Jesse came back to say that they were out of time and it was time for the rose ceremony.

That meant that Eliza and Mara were eliminated. That one had to sting for Mara, right after that whole speech.

The final seven and Clayton traveled to Vienna, Austria! This is the last stop before hometown dates. The first date card arrived and it read, "Susie, Falling in love with you feels like a fairytale." Susie was getting a second one-on-one date. The date rose means a hometown date. Clayton picked her up in a fancy car and he was very excited that love was in the air for them. This was your classic Cinderella date. He took her shopping for designer clothes and dresses and they left with tons of bags. They did a bit of sightseeing and Clayton said he loves the amount of affection she shows him. Next, he took her to meet a fashion designer where she could try on some stunning gowns. Susie was moved to tears she was so happy.

Susie returned to the hotel from the first part of her date with all of her shopping bags. The ladies squealed as she showed off the things she received. Then a man delivered the red dress she tried on at the designers'. Apparently red is Clayton's favorite dress color. Susie tried it on for the group and they were so jealous. They all agreed she looked stunning.

Susie and Clayton then moved on to the evening portion of the date with dinner inside a palace. Clayton told Susie he found her to be appreciative and humble. Susie said that she has never had a day like she had before and she's never even treated herself to something so special. She came from a humble family with modest means and parents who had tough upbringings. Susie said her father would be sweet to Clayton and she's so excited to introduce them if he picks her for a hometown date. Clayton said that he didn't want to make her uncomfortable with all the attention but he wants her to know she's worthy. With that, he offered her the date rose! Susie is bringing Clayton home!

Clayton then walked Susie into a ballroom where Chris de Burgh performed his famous song "Lady in Red." Does it get better than that?! Also - there was no way with him performing Susie would have worn anything but a red dress!

Group Date
The group date card read, "Sarah, Teddi, Genevieve, Rachel, Gabby, how bold one gets when one is sure of being love." That meant Serene was getting the other one-on-one date. They all met up with a woman who does psychoanalysis. Each of them were set to have a couple's therapy session together with Clayton. Gabby cried about her deep feelings for Clayton and the conditionality of the love from her mother. Teddi talked about how she's more open with Clayton than anyone she has been in the past.

In her session, Genevieve sat silently for a while, swore, and then said that she doesn't understand her own feelings because she's having conflicting feelings. She told the therapist she doesn't know what Clayton needs to do to have their relationship work. Clayton shared his fears and she said, "It isn't you, it's me." He was clearly using this opportunity to cut her loose. Clayton walked her outside and told her that he didn't think they had enough time to develop the relationship sooner. That was the end of Genevieve.

Clayton announced to the women that he sent Genevieve home. Then, he continued his sessions with Rachel. She talked about her fear of losing their relationship, but also added that she trusts Clayton. He loved hearing that she had trust in him and he feels as though he can be himself around her. He does worry she is beginning to question things. Sarah was up last and she told the women she loves therapy so she's excited. She started to cry about how the other women targeted her after getting the first second one-on-one date. Clayton tried to reassure her that the situation is in the past and he feels really good about where they are at in their relationship. The therapist told Clayton that she found some of the talks, performative. Yikes!

Group Date After Party
Clayton told the group he was really disturbed by the "performative" comment and asked what that was about to the group. He told Rachel he knows it's not her but then asked her if she questions him as her reason why she thinks about not continuing. She said "no" and admitted she worried about Sarah's second one-on-one. She ratted Sarah out for telling too much information about the date and how Clayton and Sarah had cried together. He felt upset because "there was no truth to it." She said hers and Teddi's perspective seemed to flip because they felt like they weren't as far in their relationships. Gabby and Teddi backed up what Rachel said.

"I really heard a lot tonight," Clayton said to Sarah. She started to cry immediately. He brought up the therapist's comments and everything the women said. "I want to be super clear, I have not said any of those things," Sarah said. She told Clayton she felt thrown under the bus. Clayton told her, "I feel like you are trying to fake cry to me, it didn't seem real at all." She told him she's out of tears. What a disaster! His trust is broken. "I think we're done. I just can't move forward with you," Clayton said. That was the end of Sarah's journey.

Clayton announced to the group that he decided to send Sarah home. In the end, he decided he couldn't give the group date rose out because he needed to take some extra time to think about his decision.

Serene met up with Clayton for their big date and she asked him about his breakup with Sarah. He felt better when she reinforced that she trusts him and his decisions. He said that he feels like she really cares about him. They had some fun dancing to an accordion player outside.

Later, they went to Belvedere Castle for dinner. Serene said she hasn't brought a boyfriend home to meet her parents until her high school boyfriend. She said they broke up because they were together for a long time, but they grew apart. They both said they worried that their longtime teen to 20s relationships were a waste of time perhaps. However, Clayton said it's not a waste of time because you are always learning in relationships. Serene told Clayton that she's falling in love with him. He said he didn't expect her to say that. Clayton offered her the date rose and she was so excited that he would be meeting her family.

Rose Ceremony
1) Susie (one-on-one)
2) Serene (one-on-one)
3) Rachel
4) Gabby
That meant Teddi, his first impression rose pick, would be going home. Clayton walked Teddi out and she said she couldn't understand what had changed over the course of a week. She was heartbroken that their relationship was over.

Next Week
Clayton goes bungee jumping, but even more terrifying, he meets the families of his final four women! The dads are understandably tough!

Clayton Echard has been named the season 26 "Bachelor" on ABC.