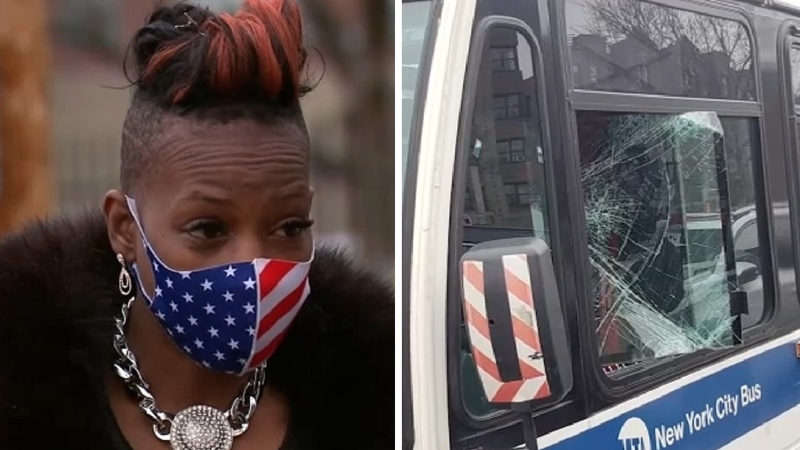 FORDHAM HEIGHTS, The Bronx (WABC) -- It was an attack that left Charline Alston's head swollen and sore, and the windows of her MTA bus shattered.

"He comes to the left side, picks up an unknown object, and just smashed the window out," she said.

Alston is talking about is Edward Guerrero, who, without warning, allegedly assaulted the 47-year-old in the Bronx on New Year's Day.

Three women were arrested and a car was badly damaged following a fight at a bodega in the Bronx.

Alston was driving the BX1 around 12:30 in the afternoon when she spotted the suspect along Grand Concourse near 181st Street.

"He's running alongside the bus demanding I open up the doors to let him in," she said.

Alston was approaching the intersection. She tells Eyewitness News that something told her he was trouble - and she was right.

The man then stood in front of the bus for several minutes, cursing and screaming - he wouldn't move. He then picked something up, smashed the window, and went after Alston.

"Punching me and ran away on the southbound side of Grand Concourse," she said.

There were about 50 people on the bus, including Yomboue Pierre Bama, who chased the suspect. At one point, as they were fighting, the suspect threatened to kill Bama.

Police did arrest the suspect.

An investigation is underway after a man was found dead on a service road in the Bronx Saturday night.

Bama says in that moment he didn't think of his own safety - only something he learned growing up in West Africa.

"Sometimes you have to try and lose your life to save somebody, that's what I know - I tried to help her," he said.

Alston says she will never forget it.

"You were an angel sent, we need more people like you to not just sit there when we're just simply doing our job, so I just want to say thank you," she said to him.

A GoFundMe account has been set up for Bama, who lost his job due to the pandemic.