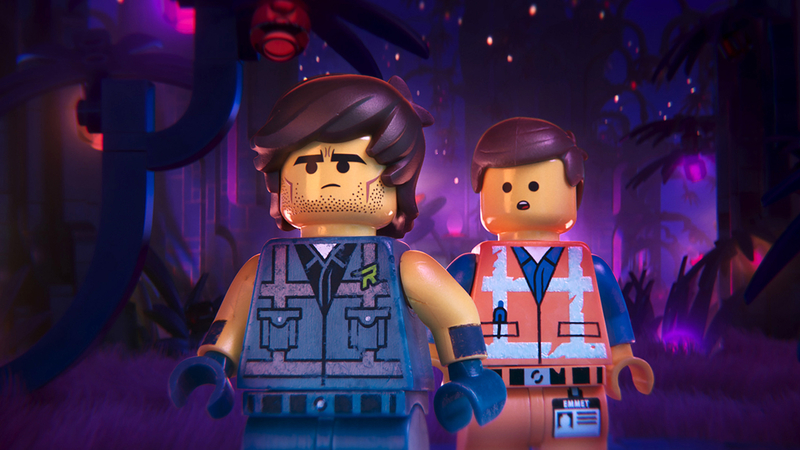 NEW YORK (WABC) -- When it comes to reviewing a new film, I can be pretty harsh, but I had so much fun watching "The Lego Movie 2: The Second Part" that it didn't seem like work.

"Awesome" is a word that's used way too often these days, but it surely applies to a picture that makes fun of that omnipresent adjective and much else in our culture. When the action begins in a town called "Apocalypseburg," I knew I was in for a really fun time.

Elizabeth Banks is back as Lucy, also known as Wyldstyle. Chris Pratt returns as Emmet and also voices a second character named Rex Dangervest, who has more courage and swagger. Together, the guys embark on a mission to save Lucy, who has been abducted along with her pals.

This movie places the action within a home where a brother feuds with his sister, and a mom, played by Maya Rudolph, threatens to get rid of the Legos,

The plot is less important than the pop culture references that fly by so fast, you'd need a repeat viewing to get them all. For example, the raptors piloting the guys' plane seem like they just came out of "Jurassic World."

Will Arnett reprises his role as Batman, and he's not the only superhero in a movie that's colorful enough for kids while poking sly fun in a way that adults will find endlessly amusing.

And speaking of funny, an alien queen named Queen Watevra Wa'Nabi, played by Tiffany Haddish, had me laughing so hard that I could barely hear what she was saying!

The original "Lego Movie" grossed almost half-billion dollars by appealing to both kids and their parents -- and this one is in the same tradition. Though not quite as awesome as the first, it's still well worth seeing.