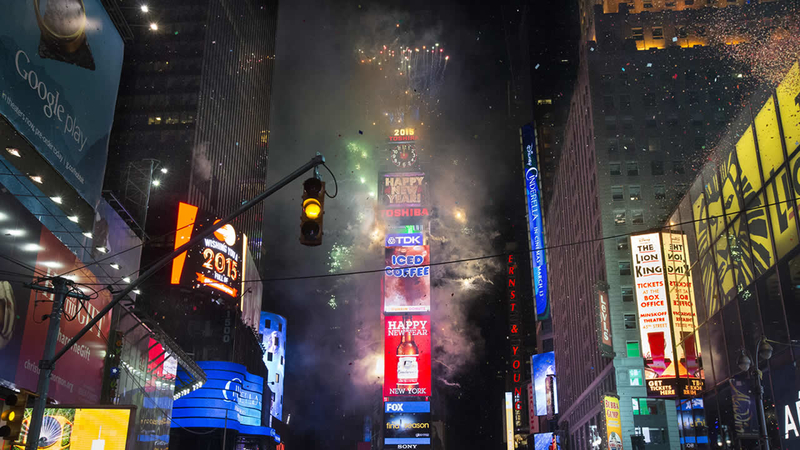 Security to be tight at Times Square for New Year's celebration

TIMES SQUARE, Manhattan (WABC) -- Security will be tight across the Tri-State as the New York area gets ready to ring in 2016, with more than one million people expected to be in Times Square Thursday night as the iconic ball drops.

It is historically one of the most heavily-patrolled public places anywhere in the world, but on New Year's Eve, security will be as tight as it has ever been, with more officers and more heavily-armed officers than at any time in the city's history. There will be multiple checkpoints, and every spectator will be screened, by hand, at least twice.

It is a sign of the times, but not a response to any single, specific, credible threat.

Organizers were already getting into the spirit of things Tuesday, tossing confetti from the marquee at the Hard Rock. It was just a fraction of the 3,000 pounds of shredded paper that will be dumped the moment 2016 begins.

With all those revelers packed into a 20-block radius, keeping everyone safe is obviously a tremendous undertaking. But it is one the NYPD is more than equipped to handle, Mayor Bill de Blasio said at an afternoon news conference with Bratton and other law enforcement officials to reassure people that the city will be as safe as it can be.

And in addition to the police presence visitors will see, including hundreds of officers armed with long guns and assigned to the new Critical Response Command, there will an incredible about of unseen protections in place.

"The usual elements will include thousands of uniformed police officers and in the subways, in the air and the waterways around New York City," Chief of Detectives James O'Neill said. "Five thousand officers assigned to Times Square, hundreds of traffic agents, plus additional mobile cameras, chemical and radiation detectors, specially-trained police dogs sniffing for traces of explosives, cops on horseback, helicopters and police boats. We will have observation posts manned by ESU officers looking for suspicious activity, while cops in plainclothes keeps watch on the crowds."

But as usual, there will be no backpacks, duffle bags or alcohol permitted in Times Square on New Year's Eve.

Tim Tompkins, the president of the Times Square Alliance, says all of the security may be deterring terrorists, but it is not deterring tourists.

"More people come here for New Year's Eve every year," he said. "One of the things about New Year's Eve is that it's about celebrating the people we love and the things that are good in life, no matter how crazy the world is. And God knows it's crazy and violent, and it's almost a reaction against that that makes you say, 'I'm going to go to Times Square and kiss the person I love, and I'm not going to be dragged down by all of the craziness of the world."