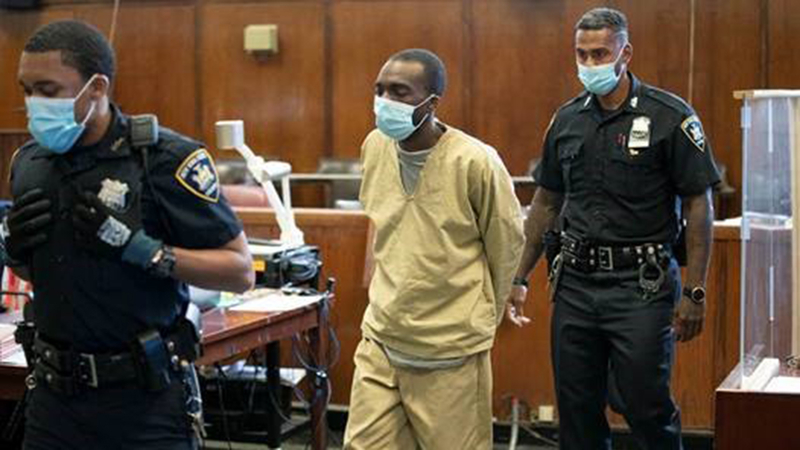 TIMES SQUARE, Manhattan (WABC) -- The man accused of shooting three people, including a 4-year-old girl, in Times Square appeared before a judge in Manhattan for the first time Wednesday.

Farrakhan Muhammad pleaded not guilty to charges including attempted murder and assault, and he was ordered held without bail.

He was apprehended in Florida by U.S. Marshals and members of the New York/New Jersey Regional Fugitive Task Force while he was eating in a vehicle in a McDonald's parking lot in Starke, located just outside Jacksonville.

Authorities say Muhammed appeared to have been staying there with a female believed to be his girlfriend, who has family in Florida. She is being considered as a person of interest but has not been charged.

Detectives retraced his steps through surveillance video to a single room occupancy hotel at 500 West 42nd street, where he changed his clothes and left town with the apparent girlfriend.

While on the run, police say he altered his appearance by shaving his head.

Law enforcement was reportedly on his tail as he traveled south, including being spotted at a Walmart in Fayetteville, North Carolina, buying supplies for his girlfriend's two dogs.

The 31-year-old allegedly fired his weapon in Times Square this past Saturday while taking aim at his own brother, striking two women and the girl, Skye Martinez.

The NYPD and the organization Smiles Through Cars held acelebration that included a parade of cars and gifts for Skye Martinez.

Another victim, 23-year-old tourist Wendy Magrinot, spoke to Eyewitness News on the phone and said she thought she was going to die.

"I was able to run like five steps and I told my mom to take the baby and run," Magrinot said. "I saw a police officer, and I screamed to him, 'I'm shot, I have a 2-year-old. I don't want to die. Pease help me.'"
EMBED More News Videos

The other woman was identified as Marcela Aldana.

Muhammad had been known to frequent Times Square, passing off bootleg CDs, and he has been arrested several times over the last few years.

Muhammed is due back in court on September 13.