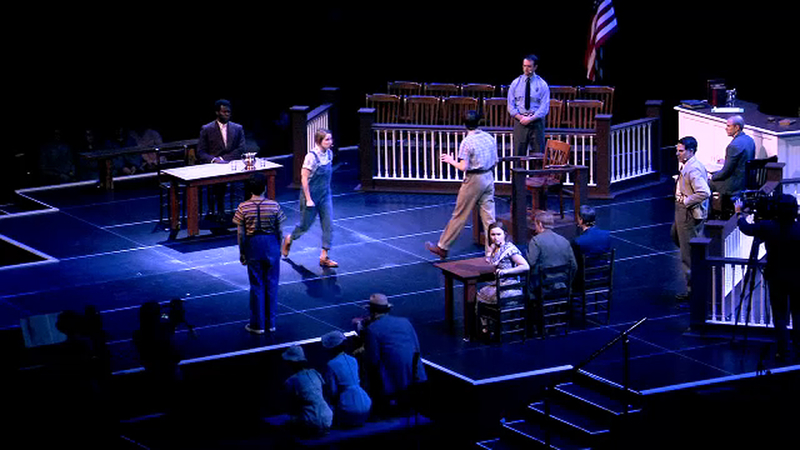 NEW YORK CITY (WABC) -- In the shadow of the legends of sport comes a landmark in the history of show business -- the first Broadway production ever to play at Madison Square Garden.

"To Kill a Mockingbird" has grossed more than $100 million and counting, but on Wednesday, students from all five New York City boroughs got to see it for free.

And a favorite son of Brooklyn was on hand to welcome them.

"I was just like you," director Spike Lee told them. "I am a product of New York City schools."

"We live in this new century and this new era, so it's like, we'll be able to learn what happened before then and just kind of build on it," said one student from Digital Arts and Cinema Technology High School in Cobble Hill.

"To get a bigger perspective of society and try to make it better," a classmate added.

The play is based by a landmark book published 60 years ago, and "To Kill a Mockingbird" is still required reading in schools because of its timeless plea for tolerance.

"We all know it's a classic, but to see it performed live is an opportunity that many of these 18,000 students would never have dreamed of," New York City Schools Chancellor Richard Carranza said.

Ed Harris stars as lawyer Atticus Finch, and I asked him why this story has stood the test of time?

His character must defend a black man, Tom Robinson, played by Kyle Scatliffe, who is falsely accused of rape.

Besides its worthy message, the hope is this unique event will serve as an introduction to live theater for the young people. And those in attendance seemed happy for the experience.

"It's my first time seeing a play, and I'm excited," one said.

"It's a new experience," another said. "Something I've never experienced before."

"A real life perspective how it feels to watch a show," a third said. "A theater show, instead of seeing it all through film, music production."

Producer Scott Rudin has already made tickets to the play available to students for as little as $10, but the free show raises the bar for all of Broadway. And Carranza hopes it will be the first of many such big shows.