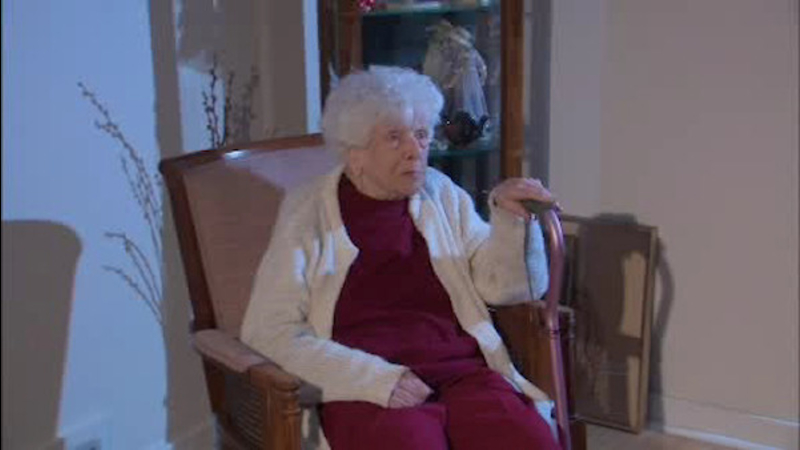 TOMS RIVER (WABC) -- Police in New Jersey are searching for a man who allegedly robbed a 102-year-old woman and her 72-year-old daughter during a home invasion Monday night.

Officers responded to a residential home on Dock Street in Toms River just after 8:30 p.m. Upon arrival, it was determined that two woman were robbed within their own home by a lone assailant.

Authorities say the women were at home when the doorbell rang, and the younger woman answered the door and was immediately pushed inside of the home by a man believed to be in his 30s.

"He was standing not near the glass, but near the bell," she said. "He'd already had the storm door open, and he grabbed me and pushed me back in. I yelled for her to call the cops."

According to police, he grabbed control of her arms and dragged her towards the interior of the home and towards the 102-year-old woman, who tried to activate a lifeline pendant around her neck. The suspect, however, pushed her to the floor and yanked it away before she could push the button.

Mom and daughter kept as calm as possible, with the daughter even making the intruder help her mother.

"When he pushed me down, she yelled at him for my falling down," she said. "And he came and picked me up very gently."

The suspect repeatedly demanded cash, and the victims complied.

Once he received the money, he fled the house and ran south on Dock Street.

The women weren't seriously injured. Besides installing a new peephole, a handyman has given them other home safety devices to make sure this never happens again. They held their own, looking after one another as they've always done.

The suspect was wearing a black knit hat, jeans and a waist-length coat. He had a thin build and appeared to be approximately 5-foot-8.